The Second Avenue Deli and B&H Dairy have closed their doors, while others are scraping by 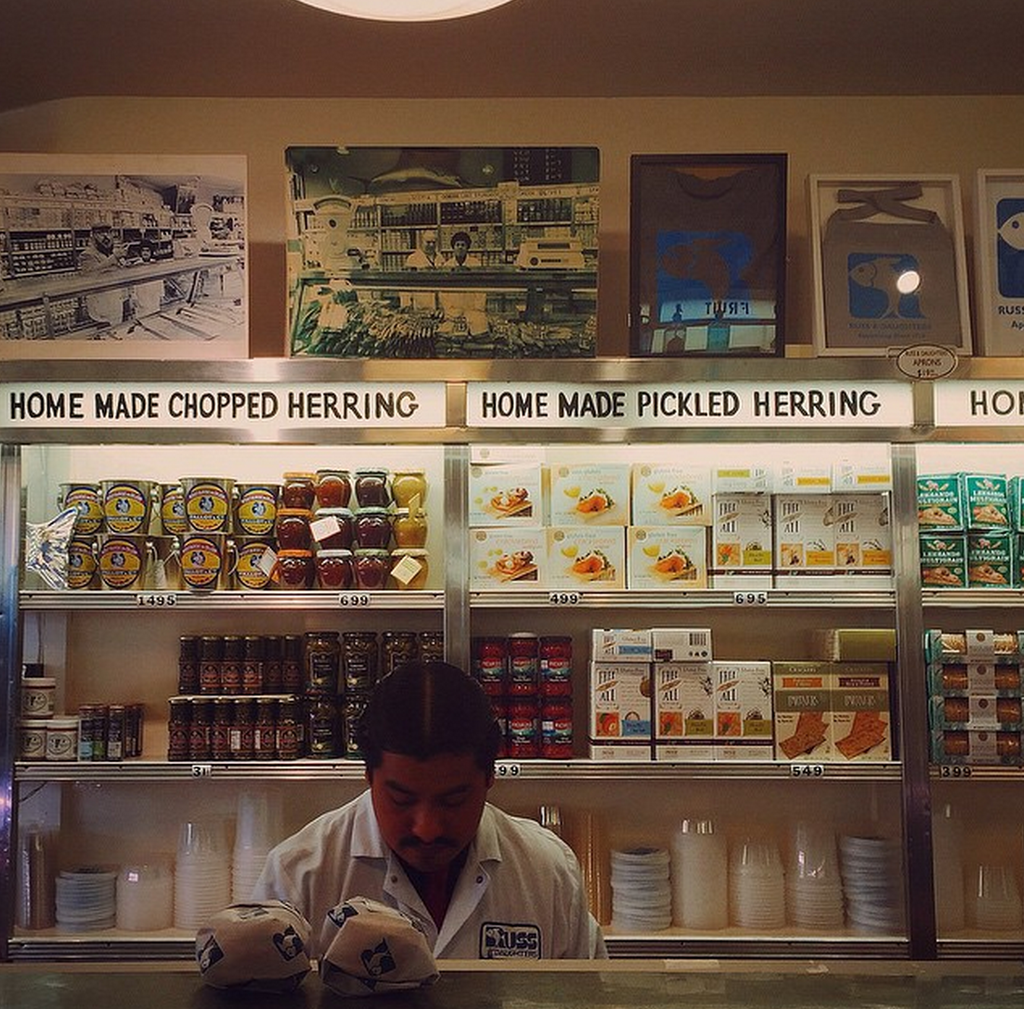 The counter inside Russ and Daughters on the Lower East Side.

Restaurants in New York have been hit hard by the coronavirus pandemic, despite Gov. Andrew Cuomo’s ruling that eateries can remain open for takeout and delivery. The city’s Jewish food establishments — including delis, bakeries and appetizing stores — are no exception. The Second Avenue Deli and B&H Dairy have closed completely, if only temporarily, while other restaurants are just barely eking by. Here’s a look at how some of them are holding up amid the pandemic.

Russ & Daughters: In the past week, Russ & Daughters has laid off almost half of its staff, according to co-owner Josh Russ Tupper, primarily because it was forced to close its two restaurants to the public. The appetizing store’s original location on East Houston — which has been in operation since 1914 and sells a variety of smoked fish, caviar and other goods — remains open for pick-ups and shipments. The business is in a better position than most because it has a relatively robust shipping operation that is helping it stay alive, Tupper told Jewish Insider, but he was still worried. “Business is hugely down everywhere,” he said, adding that a stimulus package from the government would help the store. “We’re hoping we can maintain.”

Ben’s Kosher Deli: Ronnie Dragoon, 71, owns Ben’s Kosher Deli, which has six locations in New York State and one in Florida. He told JI that he had closed one restaurant in Scarsdale because of its proximity to New Rochelle — an epicenter of the coronavirus outbreak in the state — but that the others were open for takeout and delivery. He said he had contemplated closing down the Manhattan location last week but that an employee had convinced him otherwise.

Business at that restaurant, on a tourist-heavy block near Times Square, is way down because of decreased foot traffic, though people are continuing to order such deli staples as pastrami, corned beef and brisket, according to Ken Eccles, the restaurant’s general manager. “Chicken noodle is going out more than anything,” he said. “It’s a comfort food — and also if you’re not feeling good that’s the best thing.”

The restaurant is now open Monday through Friday. But how long that will be the case remains an open question. “One thing is certain,” Dragoon told JI. “I can’t remain in business if this continues for another two to three weeks.”

Sarge’s Delicatessen and Diner: “We’re still here,” Andrew Wengrover, the owner of Sarge’s, told JI when he picked up the phone on Tuesday afternoon. The classic East Side deli, now open for takeout and delivery, has been operating in the same location since 1964, and nothing has tested it like this pandemic. “It’s a struggle,” he said. “There’s nobody. You can’t do any dining-room business. It just sucks.” Business, Wengrover said, was down at least 30-40%, though he said he was doing his best to keep on staff as many employees as he could. “I’m hoping we’ll be OK,” he said. “It’s scary.”

Jay and Lloyd’s Kosher Deli: Passover was always Jay Stern’s biggest catering holiday. Not this year. The co-owner of Jay and Lloyd’s Kosher Deli in Sheepshead Bay has lost more than half of his business since he was forced to close his dining room recently, and he doubts he will be able to make up the lost income in deliveries, which have been few and far between. Shivas were also big for him, but now that fewer people are having funerals, that business is gone too. “That’s going to be an enormous hit for us,” he told JI.

The third-generation deli man, who has been operating his business for 27 years, hopes that some sort of government relief is coming soon, but in the meantime he is simply trying to keep the business afloat. This week Stern instituted an indefinite 20% discount on all orders because he figures that his customers are suffering as much as he is — and he is not taking any money at the moment, he said, because he wants to keep paying his staff for as long as possible. While he is grateful that New York State is allowing restaurants to stay open, he worries that may not be enough. “I could lose my business,” he said.

Katz’s Delicatessen: Business at Katz’s Deli, on the Lower East Side, has inevitably gone down since the shutdown, but according to owner Jake Dell, the restaurant is “hanging in there.” The deli is getting by thanks to a devoted base of fans and regulars who have been ordering for pickup and delivery, and on top of that, he said, the deli is sending out a number of shipments across the country — many of them orders from those who are sending gifts to loved ones they can’t be with.

Dell told JI that the empty dining room, which has been closed since last Tuesday, reminded him of 9/11. “It feels almost like a daze or a dream in some ways — it’s like a blizzard outside, but the weather is nice,” he said. “But it doesn’t change what we need to do.” He said he had so far been successful in ensuring that everyone remained on staff. “We’re family here, and we’re going to try to take care of each other and make sure we get through this.”

He also said he felt an obligation to remain open during the pandemic for the sake of his customers. “We still need to be here for the community,” he told JI. “That’s what we do.”

The Pickle Guys: This barrel-cured pickle joint on the Lower East Side is still open, according to Nick Garick, an employee who spoke with JI on Tuesday afternoon, though business is — as expected — way down. The tourists who would normally stop in for a jar of kosher dills or half-sours are nowhere to be seen, and deliveries to restaurants and bars in New York have all but dried up. Still, Garick was optimistic that the pickle store would survive the coronavirus pandemic. “It’ll be gone eventually,” he said.

Economy Candy: Mitch Cohen, the owner of Economy Candy, wants everyone to know that all of his Passover merchandise is still available online, despite the fact the store — which has been in the same location on Rivington Street since 1937 — is now closed. Cohen is relying on his e-commerce operation as he seeks to weather the pandemic. After Valentine’s Day, Passover and Easter are some of his busiest holidays, though he envisions that he will take a big hit this year as plans for both holidays have been cancelled across the country.

Recently, the store — half of whose products are kosher — launched a candy care pack service, which allows people to send a box of sweets to a friend or family member. It is one example of a strategy Cohen has devised to offload his inventory. Normally during a one-month period this time of year, he told JI, Economy Candy sells more than a thousand pounds of chocolate macaroons alone. “It’s all here,” he said. “As long as I don’t eat it.”

Barney Greengrass: The Upper West Side appetizing store, established in 1908, is still open for takeout and delivery, but the restaurant’s tables are now unoccupied. The sit-down operation accounted for more than half of the business, said owner Gary Greengrass, and he has struggled to make up for the loss as deliveries have been sporadic. Business is down about 75% overall. Greengrass has been relying, for the moment at least, on the restaurant’s mail-order business, shipping fish to people around the country. “I’m worried,” he told JI. “There’s no end in sight.”

Still, Greengrass managed to have a sense of humor about his ordeal. The other day, he said, a woman called in and asked for four nova sandwiches with cream cheese, tomato and extra, extra onions. “I said to her, ‘That’s your version of social distancing?’”