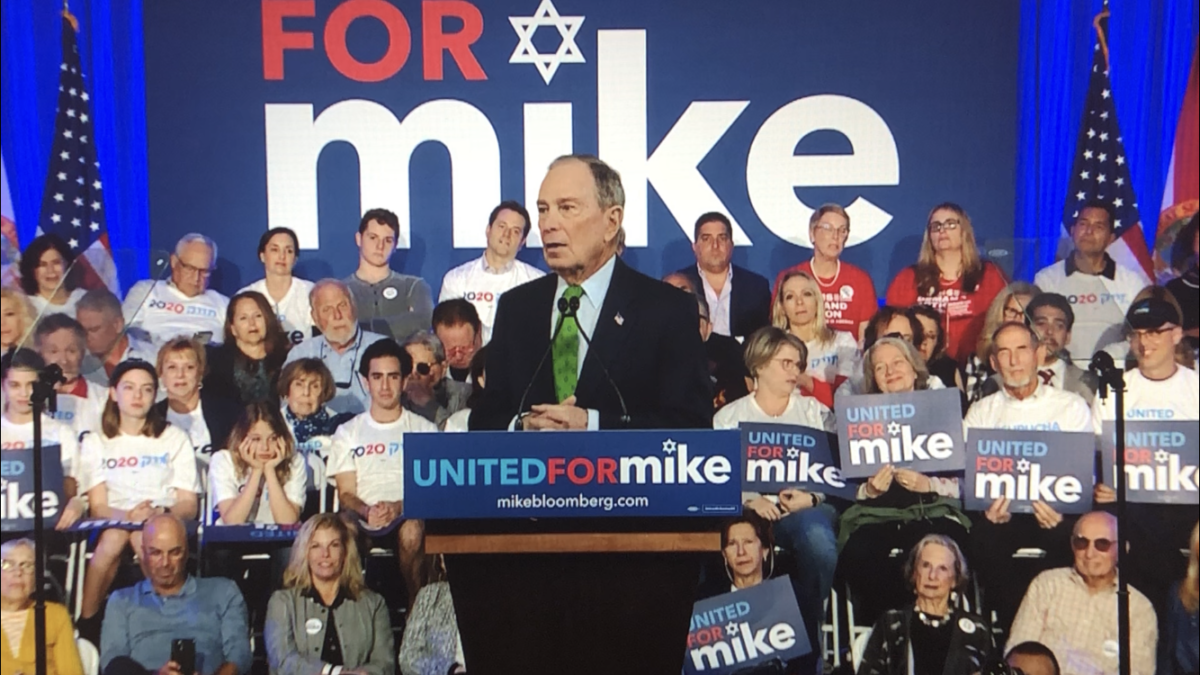 Despite President Donald Trump’s unilateral moves in favor of Israel, former New York City Mayor and 2020 Democratic candidate Michael Bloomberg cited the Biblical Moses and made the case to Jewish voters on Sunday that they don’t have to choose a candidate’s support for Israel at the expense of other values.

Two for the price of one: At the ‘United for Mike’ kickoff event at the Aventura Turnberry Jewish Center in south Florida, Bloomberg told the crowd, “There are those who will cite the embassy move [to Jerusalem] as a reason to support the president. And to that I say very clearly: If I am elected you will never have to choose between supporting Israel and supporting our values here at home,” he stated. “I will defend both — because unlike this president, you and I know they are inextricably linked… When Moses descended from Mount Sinai, he smashed the golden calf and raised high a tablet of laws — of rules — and of norms — instead. And when they fail, tragedy occurs. We know that because we’ve seen it far too many times.”

Jewish values: Bloomberg also drew a sharp contrast with one Democratic primary rival, Sen. Bernie Sanders (I-VT), over Jewish values and support for Israel. “I know I’m not the only Jewish candidate running for president. But I am the only one who doesn’t want to turn America into a kibbutz,” he said, a swipe at Sanders, who has pointed to his work at an Israeli kibbutz in the 1960s as an experience that influenced his socialist views. “I’ve spent a lot of time in synagogues in my life, but my parents taught me that Judaism is about more than going to shul.”

Standing with Israel: During the 2014 conflict between Israel and Hamas, Bloomberg took an El Al flight to Tel Aviv to defy the FAA flight restrictions after a rocket landed just over a mile from Ben Gurion Airport. “In my own little way, I wanted to show the world that Jews would never let fear of terrorism keep us out of Israel,” Bloomberg noted during his remarks.

Ironclad commitment: Bloomberg highlighted another area of difference between him and several other Democratic presidential candidates who have expressed support in conditioning U.S. aid to Israel if it annexes any part of the West Bank. “As president, I will always have Israel’s back. I will never impose conditions on our military aid, including missile defense – no matter who is prime minister,” Bloomberg pledged. “And I will never walk away from our commitment to guarantee Israel’s security.”

Opposing Obama and Trump on Iran deal: Bloomberg reminded the crowd that he spoke out against the Obama administration’s 2015 nuclear deal with Iran because it didn’t address Israel’s security needs. In a 2015 op-ed, Bloomberg explained his opposition to the JCPOA and criticized then-President Obama’s “campaign-style tactics” to pressure Democrats to support the deal. But Bloomberg stressed that for the same reasons he’s opposed to Trump’s decision to withdraw from the nuclear deal “because doing so was tantamount to giving Iran permission to relaunch its nuclear program. And after years of compliance, Iran is once again marching toward the development of a nuclear weapon.”

Direct attack: Bloomberg blasted Trump for “trying to use Israel as a wedge issue for his own electoral purposes. That, to me, is a disgrace. We must never let Israel be a football that American politicians kick around in an effort to score points.” He also criticized the administration’s border policies, drawing a lesson from the past: “When children are ripped from mothers at the border because their skin is darker, or when immigrants are denied entrance based on their religion or nationality — we hear history’s dark echoes, while others hear a dog whistle and become emboldened and empowered.”

Peace now: Bloomberg also took a swipe at Trump, who is expected to release his Mideast peace plan tomorrow as he meets with Israeli Prime Minister Benjamin Netanyahu and Blue and White leader Benny Gantz at the White House. “I will not wait three years to release an Israeli-Palestinian peace plan,” said Bloomberg.

Fighting antisemitism: As the world marks the 75th anniversary of the liberation of Auschwitz, Bloomberg addressed the rise in antisemitic violence, “not in some other country — but in the United States — in our Golden Medina.” According to Bloomberg, the response to this alarming trend should be an increase in funding for security measures and “presidential” leadership. “When the President calls his supporters ‘real Americans’ — an echo of the language that nativists, antisemites, and the KKK used for many decades — and when he is silent, and even supportive, through his words and tweets, as racist groups spread hate, he undermines our fundamental national values,” Bloomberg asserted. “Leadership sets a tone. It is either inclusive or exclusive, divisive or calming. It either appeals to ‘very fine people on both sides’ of bigotry, or it unequivocally rejects it. Well, to me, there is no such thing as a ‘very fine’ white supremacist. As president, I will not fan the flames of hatred — just the opposite.”

The promised land: At the beginning of his remarks, Bloomberg joked that he flew to Florida not only because it’s winter in New York, as is a custom for many American Jews who flee the Northeast for warmer weather in the Sunshine State. “Being here reminds me that growing up, I was told there were two Promised Lands: One had milk and honey; the other had Miami Beach and Wolfie’s Deli,” Bloomberg said. “Wolfie’s may be gone, but the memory of their pickles will live on forever.”

Bonus: In a position paper the campaign submitted to the Council on Foreign Relations last week, Bloomberg emphasized that  “any enduring peace must have as its foundation two states for two peoples — one Jewish and one Palestinian,” and added that until an agreement is achieved, “both sides should avoid unilateral preemptive actions that make peace less likely.”

Members of the United for Mike Leadership Council include: