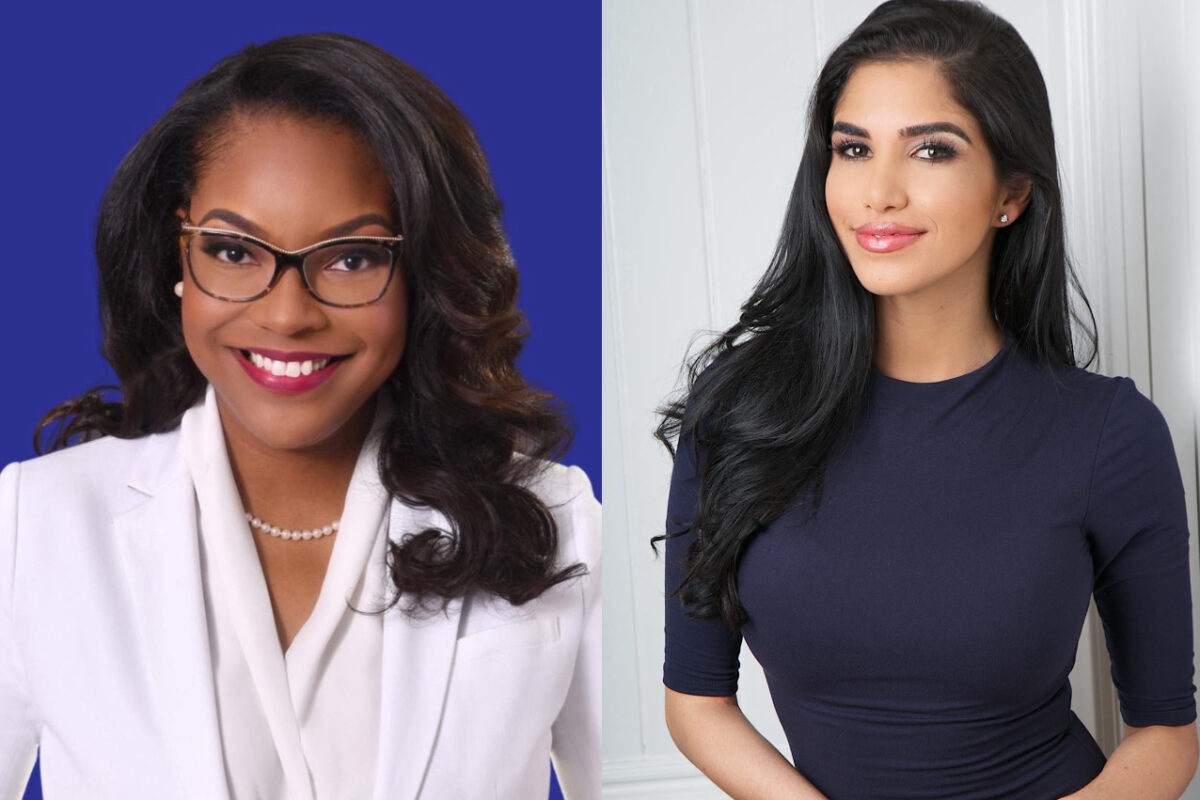 Voters in Ohio’s 13th Congressional District are weighing two very different candidates next month as they seek to fill the Akron-area seat currently held by Rep. Tim Ryan (D-OH): on one side, a Democratic upstart in state politics who hails from a local political dynasty, and on the other, a conservative media personality and Trump-world staffer.

Democratic state Rep. Emilia Sykes has seen her star rise since taking office — after first entering the Statehouse in 2015, she became the Democratic minority leader in 2019, holding that post through 2021. Her seat was previously held by both her father, Vernon Sykes — now a state senator — and her mother, Barbara Sykes.

Despite her family’s legacy — a member of the Sykes family has held the seat for nearly 40 years — Sykes told Jewish Insider she was initially “very reluctant” to pursue public office, studying law and public health with an eye toward working on health policy issues. As her father was concluding his term-limited tenure in the House, she resisted his initial encouragement to run, ultimately changing her mind after deciding that the other candidates in the field “were more likely seeking the position so that they could be the state representative and not to serve the people in the community.”

Sykes played up her ability to work across the aisle, touting legislation passed in the Statehouse while she was minority leader. “In that first year, it was nearly the same amount of bipartisan bills we had passed in the four years previously,” she said, including legislation surrounding wages, tax cuts, maternal health care, criminal justice reform and school funding.

“A lot of that was just working with people who sometimes did not want to work with me. And quite frankly, I maybe didn’t want to work with them, but being compelled and motivated by folks who elected me and my community first,” she continued.

Sykes described the Jan. 6, 2021, Capitol riot as a major factor that motivated her to run for Congress, saying that it had highlighted “that our democracy is fragile.” If elected, Sykes said she would prioritize bringing down the cost of living — including expanding the Child Tax Credit, improving public safety and protecting abortion rights — as well as leaning on her background in health policy.

In line with statements from other Democrats in competitive purple districts, Sykes said that the Biden administration and the Democratic-led Congress’ messaging “needs improvement,” explaining that they should be doing a better job of communicating their legislative accomplishments to voters.

Sykes faces Madison Gesiotto Gilbert, a former conservative media commentator and political staffer who is a co-chair of Women for Trump and was an advisor on President Donald Trump’s 2020 campaign. Gilbert’s policy positions laid out on her campaign website are generally in line with conservative talking points, such as eliminating “wasteful and unconstitutional welfare spending,” supporting school choice and opposing “Critical Race Theory” and supporting “legislation aimed at election integrity and the protection of democracy in the United States.”

Gilbert and her campaign did not respond to requests for comment.

The Akron Beacon Journal reported that Gilbert dodged a written question from the newspaper about whether she believed Trump had lost the 2020 election. “Instead, she wrote a paragraph slamming Biden and his policies,” the paper reported.

Gilbert has also expressed varying positions on abortion policy. Her campaign website expresses support for legislation banning abortions after 20 weeks, while she told the Beacon Journal that abortion laws should be decided by states and “did not directly answer questions about whether she would support a ban on all abortions, whether women who seek abortion should face criminal charges and whether there should be exceptions for rape, incest or the health of the mother.”

The seat, rated by the Cook Political Report as a toss-up, is a top priority for both Democratic and Republican leadership, and has attracted more than $6 million in outside spending, including $3 million from the Republican Congressional Leadership fund and $2.6 million from Democratic-aligned super PACs.

Sykes had a slight edge in fundraising as of the end of September, with $1.8 million raised compared to Gilbert’s $1.7 million, but Gilbert led in cash on hand with $672,000 to Sykes’ $490,000. There is no recent public polling on the race.

Both before and during her time in office, Sykes has maintained relationships with the small Jewish community in Akron, as well as the broader Ohio Jewish community. Her congressional campaign has been endorsed by Democratic Majority for Israel, J Street and the Jewish Democratic Council of America.

“Israel is the only ally that’s a very significant ally in the Middle East, and we rely upon that friendship and that relationship for many reasons. Not only for their safety, but our safety in the United States and in the region and the world,” Sykes said. That includes continuing U.S. aid without conditions. “The United States certainly defends itself the way that we feel like we need to, as should other countries.”

She said she consulted with a range of members of the Jewish community across the political spectrum as she was formulating her Israel policy during her campaign.

Adam Rosen, a member of JDCA’s New Leadership Council and a longtime family friend of Sykes, said that the candidate had reached out to him as she was “grappling with the different factions on Israel within the American political left and looking for a way to strike a balance between the various interests.”

Rosen said he was “so impressed… that she really gave this stuff a lot of thought and said, ‘If I’m going to be making a decision on this as a congressperson, I’m not going to just listen to one person… I’m going to listen to everybody.’” He said they focused deeply on trying to find common ground among the various factions, but also that Sykes had emphasized that her focus was on preparing herself to vote on these issues as a member of Congress and how best to represent both her and her community’s beliefs.

Rosen declined to specify what policy questions were particular points of difficulty.

Joe Kanfer, another member of the local Jewish community who also consulted with Sykes, described her as a “sensible, thoughtful participant who understands the value in the relationship with Israel… we will never have to worry [about] her.”

Sykes traveled to Israel in 2017 on a trip organized by the Ohio Jewish Communities (OJC), the Jewish federations’ umbrella group in the state. The trip was largely focused on business and trade development.

“It was an incredible opportunity to see Israel and experience the culture, the economy, the history,” she said. “And I have encouraged other colleagues to participate.”

Sykes emphasized that the trip gave her an appreciation for the differences between media representations of Israel and the actual security situation on the ground — “there wasn’t a moment that I was there where I did not feel safe.” She said that it was important to her to speak directly to Palestinians while she was in Israel.

“The overwhelming response [from Palestinians] was, ‘We live here and we want Israel to be safe. And if Israel does well, we can do well as well,’” she recounted.

She said that these conversations also highlighted the importance of a two-state solution, and said the U.S. should be “actively encouraging” both sides to come to the table. “It’s not easy… No one who is seeking to be a member of Congress should think that these are easy discussions.”

Gilbert’s campaign website includes a page laying out her Israel policy, where she writes, “I fully stand with Israel — America’s greatest democratic ally in the Middle East. We must strengthen our relationship with Israel and fully support Israel’s right to exist. With the rise of anti-Semitism in the Congress and across our nation, it is imperative that we combat this hateful and dangerous rhetoric.”

Gilbert pledges to support security assistance, oppose the “anti-Semitic [Boycott, Divestment and Sanctions] movement” and “ensure Israel is treated fairly across the globe.” She also declares her opposition to a nuclear deal with Iran.

Sykes said she supports reentering the nuclear deal, emphasizing that it is “ultimately really important for us to make sure that Iran does not have a nuclear weapon.”

Howie Beigelman, the OJC executive director, said that Sykes and her staff have always been available and accessible to the local Jewish community on issues like security funding, and that she “championed” two capital budget requests for local Jewish institutions.

Beigelman said he’s also been in touch with Gilbert’s campaign manager and is working to arrange a meeting, but said that she seems to be receptive to learning about the issues that are important to the Jewish community.

Rabbi Josh Brown of Temple Israel in Akron, who was invited by Sykes to deliver an invocation at the Statehouse, said that both Sykes and her father “have been really kind, good friends to the Jewish community,” and consistently accessible regarding community concerns.

“She’s passionate about helping society and giving all the different groups that make up Ohio a chance to be a part of our democracy,” Brown said.

Sykes told JI she was proud of the work she’s done with OJC, particularly on increasing security funding for local religious institutions. She went on to condemn Gilbert, accusing her of failing to sufficiently eschew and condemn rising extremist and white supremacist elements that have targeted both the Jewish and Black communities.

“But one of the things that we can do here is elect someone like me to Congress so that if these threats continue, that there is someone who understands and will be there to support the Jewish community and religious institutions,” she said.

Pressed on concerns about antisemitism on the left, Sykes noted she does not support the BDS movement, and has voted in favor of anti-BDS legislation, but “to that end, people are allowed to — and it is a free country — to say what they want to.”

“I would call [antisemitism] out and do call it out whenever I see it,” Sykes continued. “I think that there is [an] opportunity for people like me in our positions to be very clear and strong in our convictions that way.”

Marty Belsky, a leader in numerous Akron-area Jewish community groups, the former OJC president and a former chair of the regional Anti-Defamation League, agreed that Sykes is “someone who understands the problems,” praising her for her engagement with the community.

He specifically praised her for a visit to a local Jewish day school where she spoke to students about public policy and U.S.-Israel relations, for speaking with the local Holocaust commission about the importance of Holocaust remembrance and for her engagement with ADL.

“Whenever ADL needed to work with the state legislature, she was there, helping out, talking to people and listening to people,” Belsky said, adding that she understands the importance of responding to antisemitism, and has been consistent in calling it out. “Not all the state legislators do, but she does.”