The new legislation would require regular, comprehensive reports to Congress on Iran’s nuclear and weaponization efforts and an annual strategy for addressing them 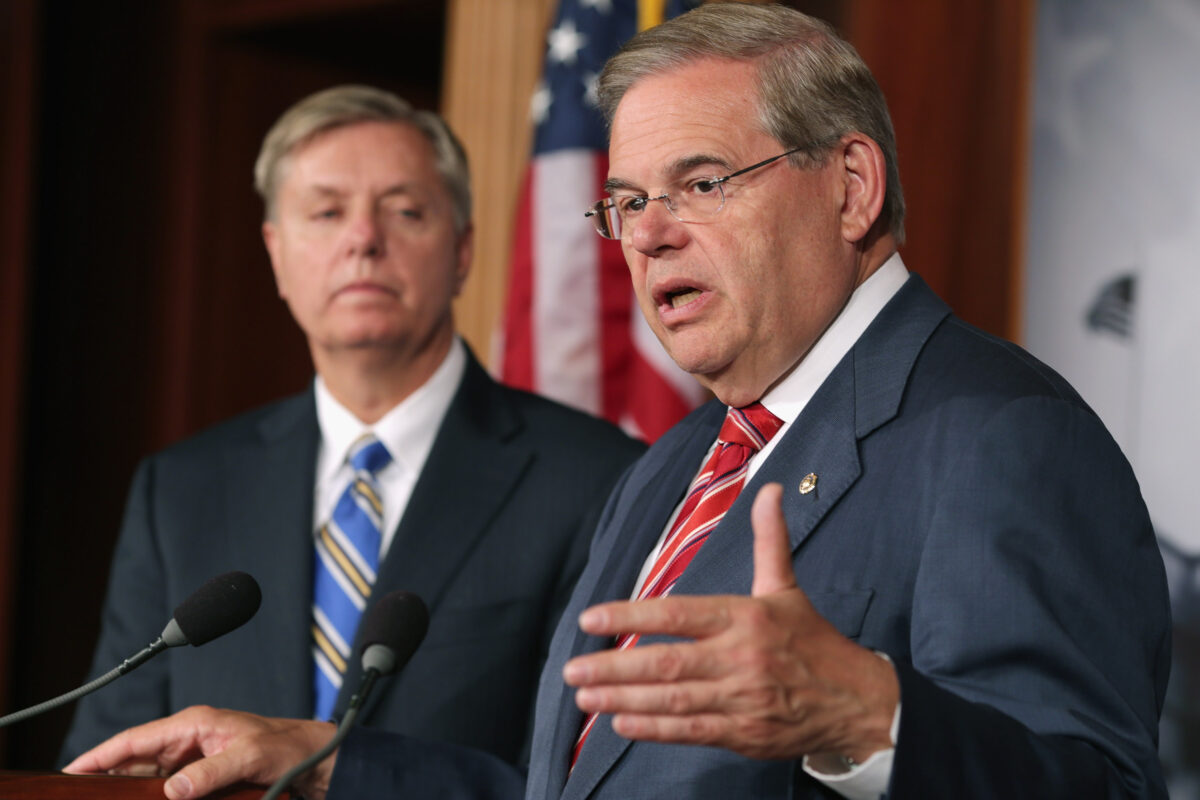 Senate Foreign Relations Committee Chairman Robert Menendez (D-NJ) (R) and U.S. Sen. Lindsey Graham (R-SC) hold a news conference after the senate voted 99-0 in favor of their resolution in support of Israel May 22, 2013, in Washington, D.C.

With the prospects of a nuclear deal with Iran appearing increasingly slim, Sens. Bob Menendez (D-NJ) and Lindsey Graham (R-SC) introduced a bill on Tuesday that would require the administration to submit regular, detailed reports on the state of Iran’s nuclear program to Congress. The legislation could, if passed, give Congress the ability to be more involved in crafting and dictating Iran policy.

The bipartisan bill would require the secretary of state to assemble a task force, composed of officials from the State Department, Office of the Director of National Intelligence, Department of Energy and CIA dedicated to tackling Iran’s nuclear program. The task force would issue a report to Congress on the state of Iran’s nuclear program every 120 days, including granular details on both the enrichment of uranium and the stockpiling of nuclear material, weaponization, missile development and other potentially related activities, and the threats they pose to U.S. citizens and personnel.

The task force would be required to issue an immediate report to Congress, within 72 hours, in the case of a significant advance in Iran’s nuclear weapons capabilities or delivery systems.

The administration would also have to submit an annual strategy that “outlines a comprehensive plan for engaging with partners and allies” regarding Iran’s nuclear and missile activities and a “whole-of-government approach to use political, economic and security related tools” to address Iran’s nuclear program.

Portions of the report not containing classified materials would also be made publicly available on the State Department’s website under the legislation.

The bill further states that it is the view of Congress that “all possible action should be taken by the United States… to ensure that the Islamic Republic of Iran does not develop a nuclear weapons capability.”

Behnam Ben Taleblu, a senior fellow at the Foundation for Defense of Democracies who has been critical of nuclear talks, told Jewish Insider that the legislation represents an effort from Congress to take a larger role in crafting Iran policy.

“The bill represents an understanding that Congress is going to have a bigger role in Iran policy and craft what Iran policy looks like, particularly when it comes to a very fast-moving nuclear threat and missile threat,” Ben Taleblu said. “They need to have all the information and it may not just be enough anymore to have a few hearings, and occasional classified briefings.”

FDD’s chief executive, Mark Dubowitz, called the bill a response to “congressional frustration” that the administration is not keeping Congress up to date on Iran’s capabilities and the “lack of a ‘Plan B’” from the administration.

Aaron David Miller, a senior fellow at the Carnegie Endowment for International Peace called the bill an insult to the administration.

“The legislation essentially says to the administration, ‘We think the intelligence [community] is asleep at the wheel and don’t trust your ability to monitor Iran’s nuclear activities. So we’re going to lay on a set of reporting requirements to make sure you’re not missing anything.’ And in the process in essence create an oversight role for Congress,” Miller told JI

Menendez told AIPAC members in June that the administration had not outlined a clear backup strategy to a nuclear deal and said that if the administration failed to provide one, “I intend to create… legislation that will ultimately dictate what a plan should be.”

Coming out of a classified briefing several weeks ago, senators were divided on whether the administration had successfully outlined a Plan B. Menendez told reporters the administration’s efforts to address his concerns were a “work in progress,” but that the administration was not coming around to his view that talks with Iran should end.

Ben Taleblu said the bill also reflects an attempt to push the administration away from its focus on the nuclear agreement and the “paradigms that have existed for about two decades.”

The requirement for snap reports in the event of significant developments “represents an understanding that even with traditional reporting periods… that is time lost on not just countering the threat, but keeping pace of what the evolving picture looks like.”

In a statement about the new legislation, Graham sought to divorce the bill’s goals from discussions around reentering the 2015 nuclear deal.

“The best way for American leaders to make sound judgments about Iran is to have the most current and reliable information available,” he said. “Our legislation also requires our government to collaborate with regional allies like Israel. No matter what happens with the Iran nuclear negotiations, we must monitor the Iranian nuclear program like a hawk.”

“With Iran’s unrelenting support of terrorism, its overmatching missile programs, and defiance in the face of international censure, there is no reason why the U.S. Congress should not receive the most up to date information about Iran’s nuclear and ballistic missile activities or the Administration’s diplomatic efforts to address the threats posed by them,” he said in a statement.

The two lawmakers have teamed up on Iran issues multiple times during the Biden era: In March 2021, Menendez and Graham organized a letter urging a more comprehensive agreement with Iran that addressed all of its nuclear and non-nuclear malign activities. They subsequently proposed an agreement that would create a regional nuclear fuel bank to allow Iran and other Middle East nations to use nuclear power but prevent them from enriching domestically.