Graham discussed Iran, plans for increased congressional oversight, Russia and Biden’s comments about Putin in an interview with JI on Monday 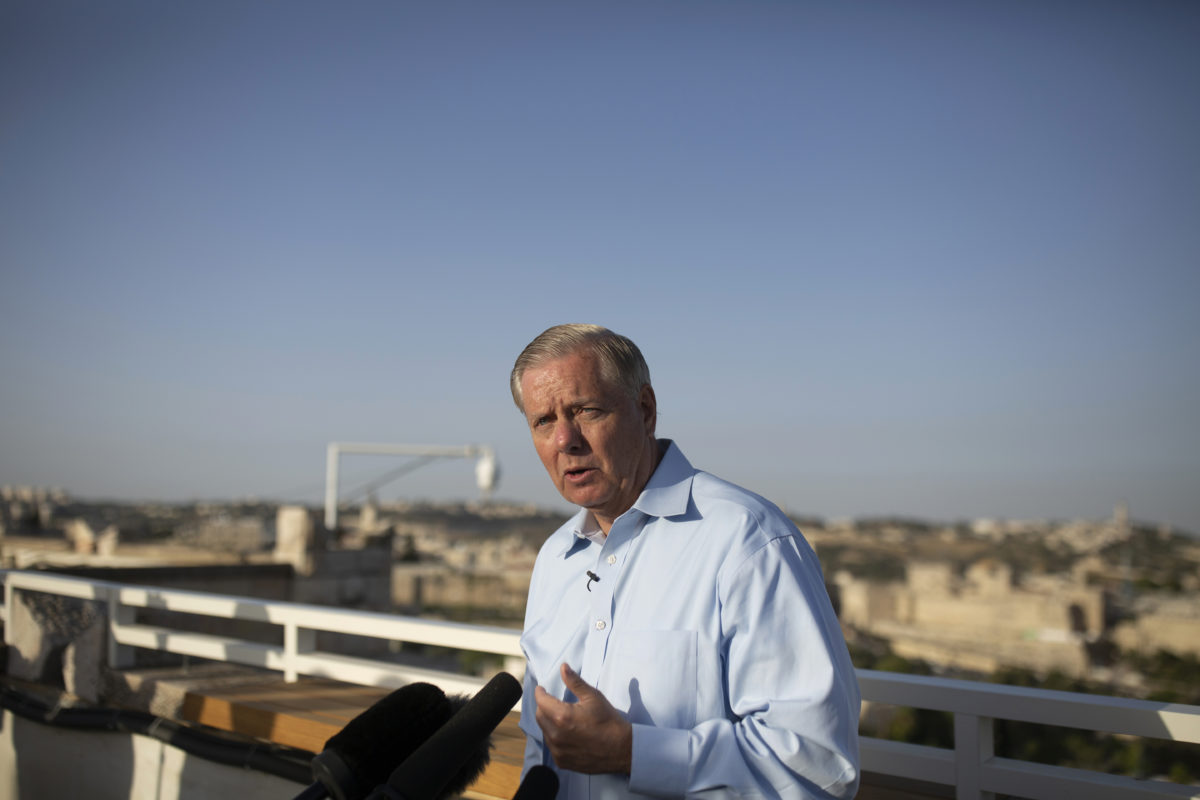 Sen. Lindsey Graham (R-SC) suggested that an Israeli strike on Iran could be the most likely way to prevent Tehran from acquiring a nuclear weapon in an interview with Jewish Insider on Monday from Jerusalem.

While “maximum pressure” sanctions “[make] it more difficult,” Graham argued the only ways to stop Iran’s nuclear ambitions are an unlikely “change of heart” by Supreme Leader Ayatollah Ali Khamenei, an internal overthrow of the regime or a U.S.-supported Israeli strike against Iran’s nuclear facilities.

“If you don’t [understand] that, you’re making a huge mistake,” Graham said. “This is never going to end short of a nuclear weapon unless somebody stops them. And those are the three ways that would stop the advance toward a nuclear weapon. The first one is one in a billion. The second one — who knows — if the Iranian people want to continue to live like this, that’s up to them. But the third one [the Israeli strike] is probably the way this movie ends.”

Graham detailed a plan to increase congressional oversight of Iran’s nuclear program that he has been developing during his trip. He said he had asked Israeli officials on his previous visit to the country in February to put together a detailed list of red lines and major concerns regarding Iran’s nuclear program.

Graham said he is still developing the specifics of the legislation but sees it as a more viable path than other possible proposals and believes there will be “a lot” of bipartisan support for his approach. He also said it is “essential” with or without a new Joint Comprehensive Plan of Action (JCPOA).

“I settled on the [monitoring] approach a couple of days ago because drawing red lines in statute and requiring sanctions and the use of force gets to be too complicated,” he said.

He also argued that the forthcoming legislation would fill gaps in the JCPOA’s weaponization monitoring.

“My first night here, I couldn’t sleep. I kept thinking, ‘Well, what are we trying to do? We’re trying to monitor the program,’” he said. “The JCPOA doesn’t monitor… the weaponization, it just monitors enrichment. I want to monitor the nuclear weapons arena.”

The South Carolina senator, who met with Israeli Foreign Minister Yair Lapid and leaders from the Mossad and Shin Bet, Israeli government experts on the Iranian nuclear program and former Prime Minister Benjamin Netanyahu, said that the Israelis showed him “multiple smoking-gun evidence” seized by Israel that he believes proved Iran is lying about its nuclear program and is seeking a bomb.

Graham blasted the Biden administration’s efforts to reenter the 2015 nuclear agreement, comparing them to “finding plans to Auschwitz in 1937 and still doing the Munich agreement” because “it is clear to anybody who is not deaf, dumb and blind on the issue that the Iranians are trying to build a nuclear weapon” — both as a weapon against Israel and to protect the Iranian regime.

Along with Sen. Bob Menendez (D-NJ), Graham has proposed creating a regional nuclear fuel bank — supplied by an outside power — for Middle Eastern countries, including Iran, to advance civilian nuclear weapons programs and barring Iran and others from conducting their own enrichment. But Graham acknowledged that this course is unlikely.

“I don’t think that’s remotely possible as long as [the Ayatollah] is in power,” he said. “So what happens here is you create a system to watch him like a hawk and when they take the steps that would lead to a weapon, you have enough notice to take corrective action… military strike by Israel supported by the United States.”

Graham also said a “maximum pressure” sanctions campaign is the “best way to go” if the Iranians reject his proposal.

Graham also touched on the ongoing Russia-Ukraine conflict and appeared to defend President Joe Biden’s off-the-cuff comment made over the weekend that Russian President Vladimir Putin “cannot remain in power,” which set off an international firestorm.

“If you’re upset with Biden calling for Putin to go — question for the French and everybody else: Are you willing as part of a negotiated settlement to provide security guarantees to Ukraine from future invasions by Russia?” he said. “If you’re not willing to do that, then I think more conflict is inevitable.”

The South Carolina senator has been outspoken about the conflict, even calling for Putin’s assasination on Twitter, but was largely uncritical of Israel’s role in the crisis.

Israel served as a mediator between Russia and Ukraine in the weeks since the conflict began. It built a field hospital in Ukraine, but has declined to provide weapons to Ukraine or join some Western sanctions.

“I think Israel is making a really good-faith effort to make sure that Israel doesn’t become a safe haven for oligarchs,” Graham said. “They have really been generous on the nonlethal front… What I’ve learned on this trip is that Ukraine from early on asked Israel to be a mediator. And I’m OK with the war ending. I just don’t want Ukraine to be sold out. So Israel’s sort of been between a rock and hard place.”

He suggested that Israeli officials could have been more outspoken against Moscow, noting that Israel refrained from cosponsoring a U.N. Security Council resolution condemning the invasion last month.

“The big mistake, in my view, was not being clear about the invasion. It’s one thing to mediate, it’s another thing to be clear,” he said. “They were trying to make sure they could be an honest broker, but there was an opportunity to tell Putin and the world, ‘What you did was wrong.’”

Graham’s trip coincided with Secretary of State Tony Blinken’s stop in the region for the “Negev Summit,” a meeting of leaders from Israel, the U.S. the United Arab Emirates, Bahrain, Morocco and Egypt. Graham praised the Biden administration for “nurturing” the recent normalization agreements between Israel and several Arab states.