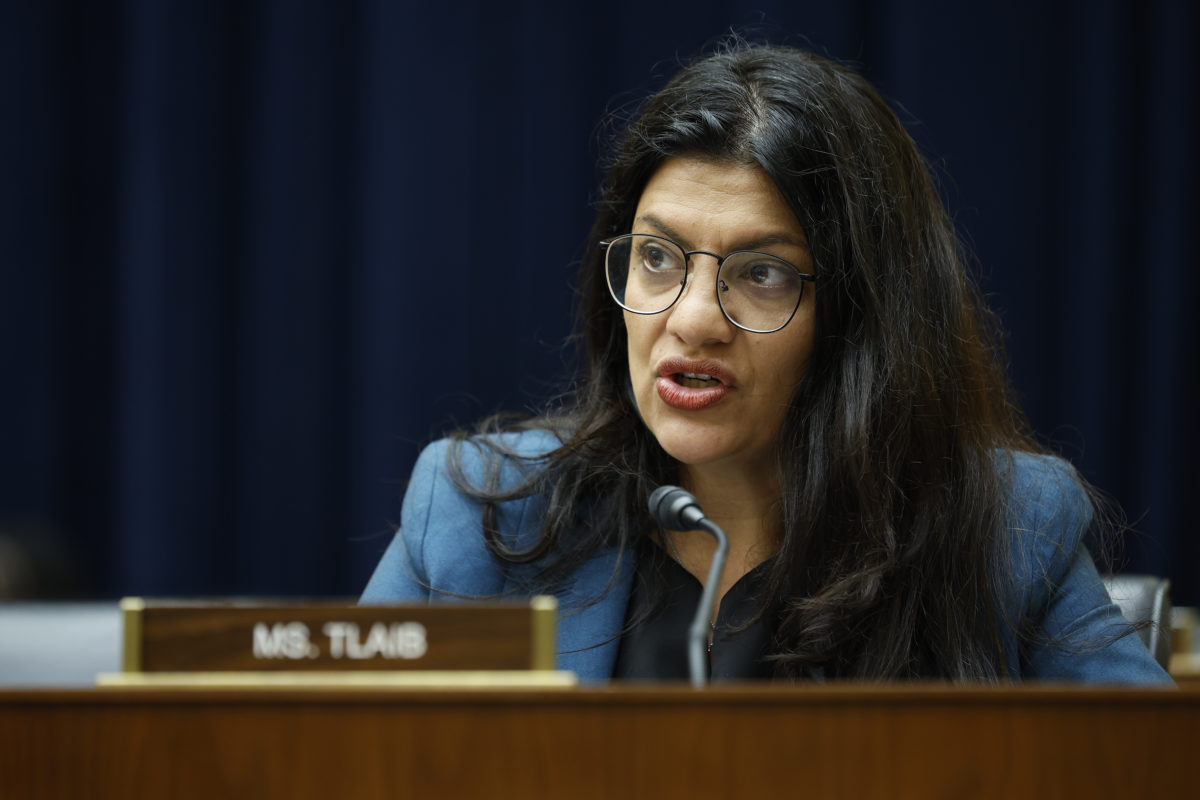 Rep. Rashida Tlaib (D-MI) questions Treasury Secretary Janet Yellen as she testifies before the House Financial Services Committee in the Rayburn House Office Building on Capitol Hill on May 12, 2022, in Washington, D.C.

Rep. Rashida Tlaib (D-MI) and a handful of progressive Democrats introduced a resolution on Monday referring to Palestinian Arabs as the “indigenous inhabitants” of Israel and endorsing Palestinian right of return, one of the most sensitive issues in Israeli-Palestinian relations.

The resolution seeks to set as U.S. policy recognition of the “Nakba” — the term, translating to “catastrophe,” that Palestinians use to refer to the mass Palestinian exodus that accompanied the foundation of Israel — and accept as a settled issue Palestinian refugees’ right of return to inside Israel’s borders. It also refers to Palestinians as the “indigenous population” of the region, but does not acknowledge Jewish history in the region.

The legislation accuses Israel of having “depopulated more than 400 Palestinian villages and cities” during its 1948 War of Independence and characterizes ongoing Israeli “expropriation of Palestinian land and… dispossession of the Palestinian people,” including Israeli settlements, as part of an ongoing Nakba. In a statement announcing the legislation, Tlaib accused Israel of “ongoing ethnic cleansing.”

Neither Tlaib nor any of the cosponsors responded to a question from Jewish Insider about whether they viewed Jews as also being “indigenous” to the region.

Newman is currently facing a primary challenger, Rep. Sean Casten (D-IL), who is backed by various pro-Israel groups, including J Street, which had endorsed Newman in 2020. Bowman has faced criticism from the Democratic Socialists of America over his positions on Israel, including voting for supplemental Iron Dome funding and traveling to the Jewish state last year. He has since removed himself as a cosponsor of legislation supporting the Abraham Accords.

Rep. Brad Sherman (D-CA) blasted Tlaib’s resolution as “predicated on a demonstrably false historical narrative… predictably failing to mention the hundreds of attacks on Jewish communities in the British mandate of Palestine by Palestinian militias.”

Sherman noted that the resolution “omits” that Israel was attacked by eight Arab states in 1948, that the 1948 war began with attacks by Arab forces seeking “a war of annihilation” against Jewish militants and civilians, that “not a single Jew was left alive in the portion of the British mandate controlled by Arab armies, that no Jews lived in the Jewish quarter of Jerusalem for two decades and that 800,000 Jews were expelled from neighboring Arab countries.”

“Thankfully, the vast majority of my colleagues in Congress and in the House Foreign Affairs Committee understand that the historical narrative in Congresswoman Tlaib’s resolution is an outrageous falsehood and thus this bill isn’t likely to be passed or even considered,” Sherman added.

Rep. Josh Gottheimer (D-NJ) agreed that the resolution has no “hope of moving forward,” claiming the resolution seeks to “rewrite history and question Israel’s right to exist.”

“It’s unfortunate that this histrionic and invidious resolution was introduced now, particularly, as we see continued progress in efforts to normalize relations between Israel and its neighbors in the region,” Gottheimer added. “Divisive efforts like this only set back our fight against terror and the advancement of democracy in the region.”

Aaron David Miller, a senior fellow at the Carnegie Endowment for International Peace who advised multiple secretaries of state on Arab-Israeli negotiations, said that the legislation asks Congress to “wade into the intricacies and volatility of some of the most combustible issues in the Israeli-Palestinian conflict and essentially recognize a narrative.”

“This legislation is packed with landmines and traps,” Miller continued. “The whole issue of right of return is an issue that for years in negotiations we realized was the most combustible, most complicated, and the one which we had the least chance of resolving…. That’s the third rail of the Israeli-Palestinian negotiations.”

Miller emphasized that the legislation has no prospect of seeing widespread support in “any Congress that I can imagine.”

He described the legislation as “designed basically to support what the framers regard as an unrecognized, underreported and unacknowledged narrative in the American political scene of the Palestinians.” He added that the “Palestinian narrative has never been adequately explored or acknowledged” in U.S. politics and argued that “there was a way perhaps to go about this which would have recognized both Israeli independence and the Nakba being intertwined.”

Some Republicans seized on the legislation.

Rep. Lee Zeldin (R-NY) called it “the latest in a long line of antisemitic, anti-Israel statements, policies and actions by the most radical voiced in the Democratic Party.” Rep. Jim Banks (R-IN) called it “disgusting anti-Semitism.” Sen. Rick Scott (R-FL) said “the continued anti-Semitism from radical socialists in the House is horrific.” The three Republicans also sought to tie House Speaker Nancy Pelosi (D-CA) to the initiative, demanding that she condemn the move.