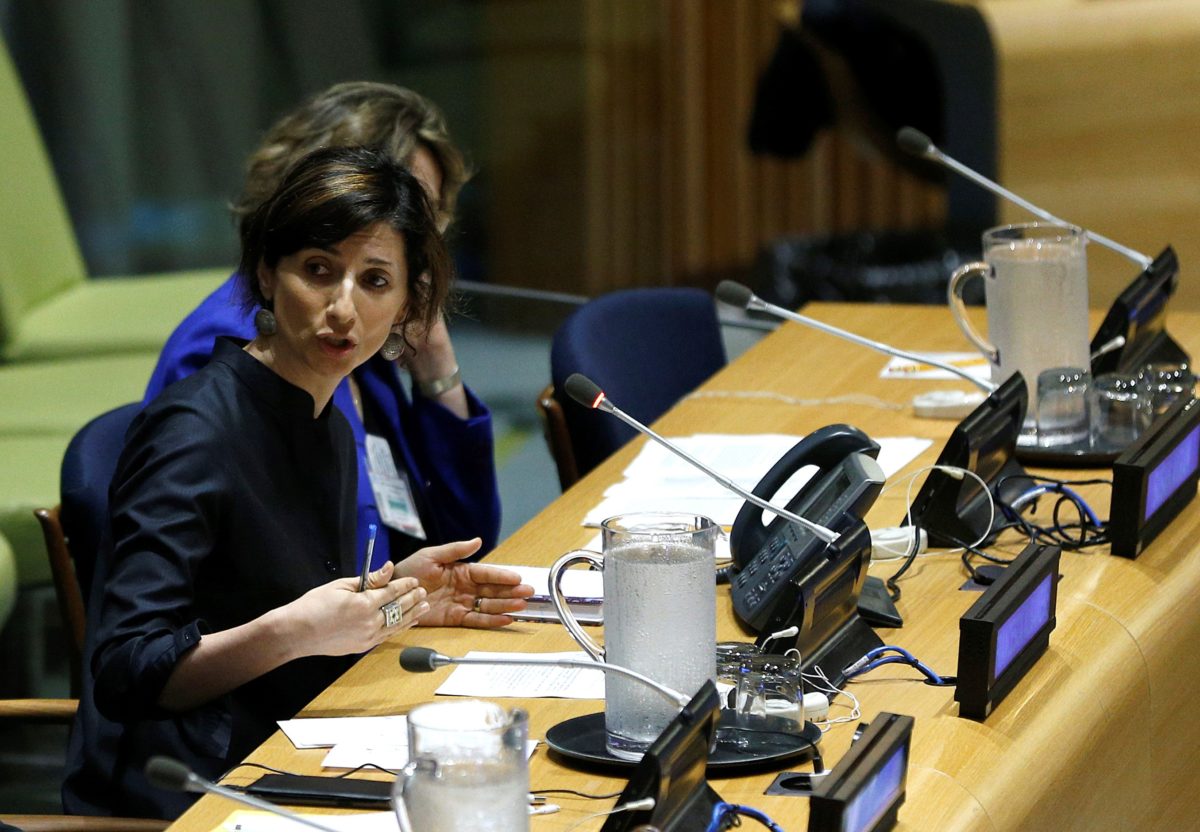 Francesca Albanese, delivers a speech during the UN Forum on the Question of Palestine at the United Nations Trusteeship Council Chamber in New York on May 18, 2018.

Israel’s ambassador to the United Nations in Geneva on Thursday slammed the appointment of a new U.N. special rapporteur handling Palestinian issues, saying “we don’t expect to receive from her any fair and objective treatment.”

The U.N. Human Rights Council is expected to officially approve Italian human rights lawyer Francesca Albanese as its new “special rapporteur on the situation of human rights in the Palestinian territories occupied since 1967” this afternoon in the body’s last session before it adjourns until June.

“We cannot expect any objectivity or professional treatment from such an activist,” Ambassador Meirav Eilon Shahar, Israel’s ambassador to the U.N. and International Organizations in Geneva, told Jewish Insider on Thursday. She called Geneva, a hub for international human rights organizations, a “fantasy world where it’s really, really detached” from reality.

“We will continue to defend Israel against unfair, one-sided actions across the U.N.-system,” the spokesperson told JI. “Rather than unfairly singling out Israel, U.N. member states should play a constructive role in advancing a negotiated peace between Israelis and Palestinians.”

This month’s meeting of the Human Rights Council was the first that has included the United States since former President Donald Trump left the body in 2018 over concerns about its bias against Israel.

“The council provides a forum where we can have open discussions about ways we and our partners can improve,” Secretary of State Tony Blinken said in October when the council elected to admit the U.S. to the body. “At the same time, it also suffers from serious flaws, including disproportionate attention on Israel and the membership of several states with egregious human rights records.”

The Biden administration has tried to toe the line of both supporting the council — and international human rights organizations more broadly — while criticizing their approach to Israel.

“We reject all forms of delegitimization of Israel, in the U.N. or elsewhere,” the State Department spokesperson said. The United States is the biggest contributor to the U.N.’s budget, including that of the Human Rights Council.

The special rapporteur position, which is unpaid, has existed since 1993 with a mandate to “investigate Israel’s violations of the principles and bases of international law” in the “occupied Palestinian territories.” Israel is the only country that has a dedicated special rapporteur investigating it, as well as a permanent agenda item on the council’s 10-item agenda.

Albanese has worked on the Israeli-Palestinian issue for much of her career. She worked for a period at the United Nations Relief and Works Agency, its body focused on Palestinian refugees and published a book on Palestinian refugees in 2020. On her application for the special rapporteur position, she answered “no” when asked whether she holds “any views or opinions that could prejudice the manner in which the candidate discharges the mandate.”

But Albanese has a history of deep criticism of Israel and the Israeli-Palestinian peace process. In a tweet last year, she criticized the Oslo peace process that yielded the framework for a two-state solution. She appeared on a panel in December with Omar Barghouti, the founder of the international Boycott, Divestment and Sanctions movement, and she has accused Israel of committing “crimes against humanity.” A report published by the NGO UN Watch found that Albanese compared the Nakba — what Palestinians refer to as the “catastrophe” of the founding of the State of Israel — to the Holocaust in an Italian-language interview.

Such a comparison “advocates, really, de facto destruction of Israel, so we don’t expect to be treated very fairly by her,” noted Eilon Shahar.

“It’s very clear that she will continue with the same line or even worse,” said Eilon Shahar.

Last May, following a renewed spate of violence between Israel and Hamas in Gaza, the U.N. Human Rights Council created a Commission of Inquiry, which is separate from the special rapporteur position, to investigate “all alleged violations and abuses of international human rights law leading up and since 13 April 2021” in “the occupied Palestinian territory, including East Jerusalem.” The commission, which has a wide-reaching mandate, is expected to release its first report in June.

“The COI is very one-sided. It’s there forever,” said Eilon Shahar, referring to the fact that the commission is open-ended. She described the difficult task of lobbying other countries to support Israel in the Human Rights Council.

“​​Change is very slow. I will say that,” noted Eilon Shahar. “As I said, this is a bubble and reality doesn’t often knock on the door. But we are trying to make sure it does.”