Biden to Rivlin: Iran won’t get nukes ‘on my watch’ 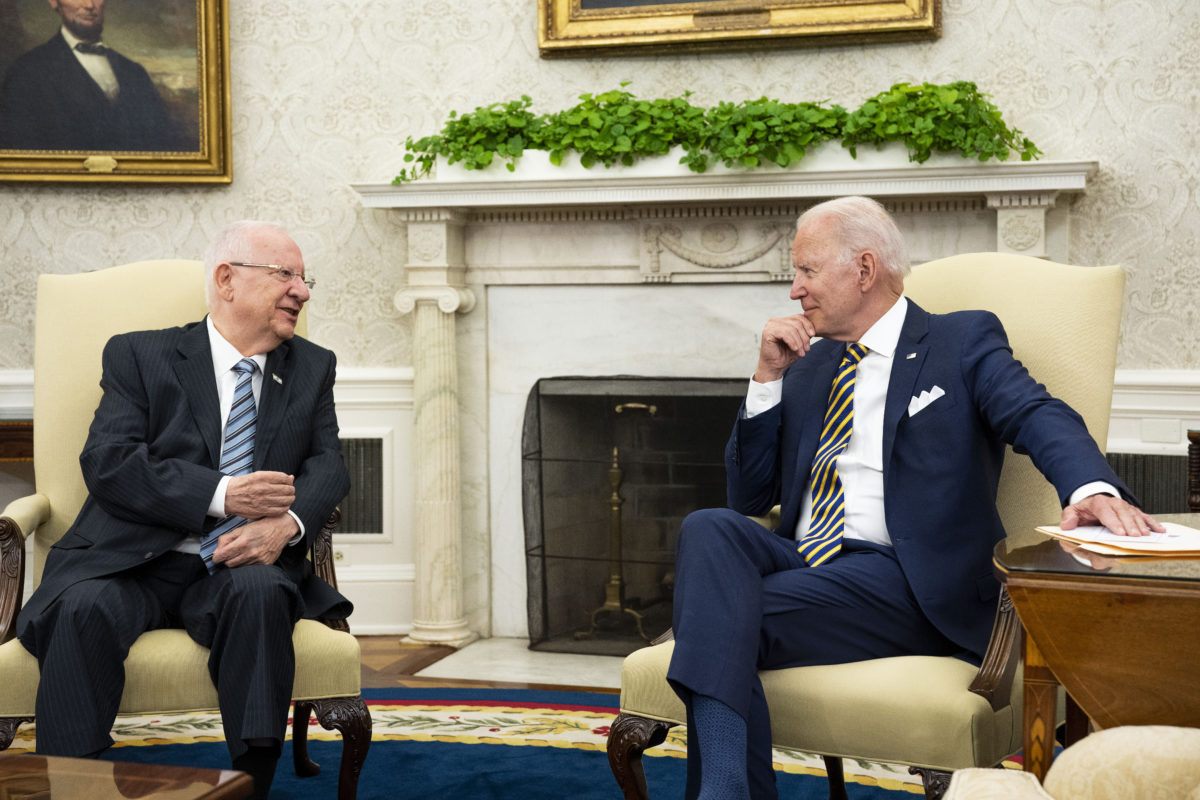 U.S. President Joe Biden meets with Israeli President Reuven Rivlin in the Oval Office June 28, 2021 in Washington, DC. Biden and Rivlin were expected to discuss a range of bilateral issues during their meeting.

In a meeting between Israeli President Reuven Rivlin and President Joe Biden at the White House on Monday, Biden pledged to keep Tehran from acquiring nuclear weapons as his administration engages in ongoing negotiations over a reentry into the 2015 Iran nuclear deal

“What I can say to you: Iran will never get a nuclear weapon on my watch, as they say,” Biden told Rivlin during remarks Monday afternoon.

The meeting is Biden’s first with Israeli leaders since Israel installed a new government earlier this month and follows American airstrikes Sunday night against Iranian militias in Syria and Iraq.

Biden also spoke about his constitutional authority to greenlight American airstrikes on Sunday that targeted Iranian proxies in Syria and Iraq. White House Press Secretary Jen Psaki noted that the timing of the strikes was unrelated to the meeting between Biden and Rivlin.

Psaki described the Biden administration’s diplomatic overtures to restore the nuclear deal despite its hardline approach to tackle Iranian proxies: “Iran is a bad actor in the region … At the same time … seeking the opportunity to move forward on negotiations to prevent Iran from acquiring a nuclear weapon is in our national interest, and that’s how we will evaluate.”

President Rivlin thanked Biden for America’s friendship with Israel, adding that the relationship endures even when the two allies “agree not to agree about everything.”

“We’re working on a date, but don’t have anything to preview at this point in time,” Psaki said about a future Biden-Bennett meeting.

Monday’s Oval Office meeting was an opportunity “to highlight the deep ties and enduring partnerships between our nations, as well as a chance for the leaders to compare notes and consult on both the challenges and opportunities facing the region,” explained Psaki.

“We are partners, dear speaker, we are friends, our nations bound together. Friends may have disagreements from time to time. This will never, never endanger our close relationship,” Rivlin said in remarks ahead of the meeting. “Our shared mission crosses the boundaries of parties and governments. Even when leadership changes, our obligation to each other remains.”

His comments come on the heels of intense debates within Pelosi’s caucus over Israel’s policies during its recent war with terrorist groups in Gaza.

Marc Rod contributed to this report.