A new online dating app, created in quarantine, is positioning itself as an exclusively Jewish alternative to Raya 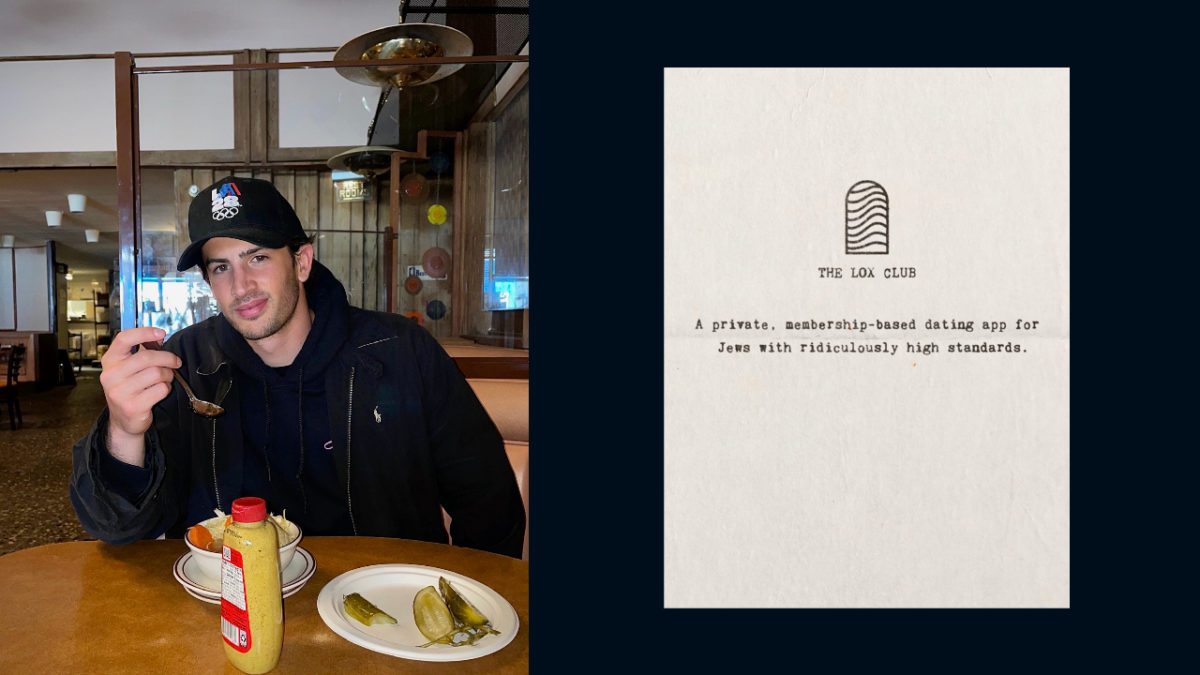 For many online daters, the ordeal of seeking a romantic connection on a crowded digital platform can often leave them feeling deflated. The drudgery of swiping, matching and messaging, ad infinitum, offers little room for genuine interactions. The Lox Club, a new membership-based app “for Jews with ridiculously high standards,” according to its tagline, wants to inject some levity into that experience, while creating a sort of heimish space for those who feel overwhelmed and even alienated by online dating.

The Lox Club differs from other Jewish dating apps like JDate and JSwipe in that its users, who pay a monthly fee, must apply for membership and wait to be accepted after they are vetted by the app’s volunteer committee. Members are also required to include their full names along with a link to their Instagram pages. The app might best be described as an exclusively Jewish alternative to Raya, the members-only dating and social networking app geared toward entertainment industry types.

But the Lox Club, whose interface is designed to give users the impression that they have entered a kind of secret speakeasy, has its own approach. Among other things, it includes a personal matchmaking service available to those who want dating advice as well as a feature that limits the number of swipes to approximately half a dozen every six hours, so users won’t just think with their thumbs. “My thesis is that dating apps don’t have to be cringey,” Austin Kevitch, the Lox Club’s 29-year-old founder, told Jewish Insider in a recent interview. “I wanted to make it more of a fun experience, and the dating part is disguised within it.”

Since launching last month, the app — which costs $8 per month for an annual sign-up — has attracted more than 10,000 members, according to Kevitch, and membership is doubling every week. “We’re very intentional about reading every single application,” said Kevitch, estimating that the Lox Club accepts about 20% of those who apply. “We don’t care about the amount of Instagram followers people have,” he added. “We’re looking for more down-to-earth people.”

Kevitch isn’t particularly observant but believes in the importance of what he describes as Jewish values, citing family, empathy and ambition — and he hopes he has created a venue for those who share such values to meet. “Myself and a lot of my friends, we look for these cultural values in partners,” Kevitch told JI. “Those are surprisingly hard to find on the free public dating apps, where you just swipe through people for hours,” he said. “It’s just endless swiping and you’re searching for this person, whereas we wanted to just create this community where everyone meets those values.”

Despite a background in digital entrepreneurship, Kevitch, who lives in Los Angeles, is an unlikely online dating evangelist. In fact, he had never used a single dating app until last year, when he was going through a breakup and found himself in a funk. The apps, it turned out, didn’t help. “I tried two of them, and I thought that they felt just superficial,” he recalled. “I remember at the time thinking, like, wouldn’t it be cool if there was a more self-aware dating app?”

On a whim, he created a website, called it the Lox Club — its logo is an ancient tablet with lox-like texture — and added a short description. “I probably thought of a name that doesn’t sound like a dating app,” he said by way of explaining the app’s ethos. To his surprise, however, “tons of people started applying for it and sharing it all over Instagram.” When the pandemic hit, Kevitch was in the process of selling his previous startup, Brighten, an anti-bullying app, and he needed a new project. “Lox Club made a lot of sense,” he said. “With COVID, everyone’s stuck at home and lonely and there’s no other way to meet people.”

So he went for it, bringing on two engineer friends to help him build the app. “I was very intentional about designing it so that we have the photos and also a career and ambitions section so people can actually write where they’re at in life and what’s their story and what they’re interested in and, more importantly, what their dreams are,” Kevitch said. “Like, where they want to be in life. I think that says a lot about someone, lets you know a lot about compatibility and also is a great talking point for when you do start chatting with someone.”

Users who have joined the app within the past few weeks seem to appreciate it. Allana Blumberg, 21, who studies marketing at Ryerson University in Toronto, said she applied to join the Lox Club after a Jewish influencer she follows posted about it on Instagram. Blumberg was intrigued not only by the Lox Club’s Jewish focus but also by the possibility that she could use the app to make career connections because it isn’t entirely proximity-based. “It’s more global,” she said. “But I think that’s kind of cool because then you could also use it as a networking opportunity.”

From a romantic standpoint, Blumberg — who has gone on one date through the Lox Club and says she is “dating to marry” — explained that meeting a Jewish man is something of a priority for her. “I think it’s important for my parents too,” she added with a laugh. Blumberg had used Raya and Hinge, a free online dating app, but was disappointed with the results. “I found whenever I would filter it so it was only Jews, it was like the same people over and over again,” she told JI. “So I kind of wanted to just try something new.”

Isley Walker, who lives in Brentwood and works as an enterprise account manager at a stealth startup, feels similarly. Walker applied to join the Lox Club about a month ago and was accepted last week. Though she is not “dead set” on meeting a Jewish man, the Lox Club appealed to her primarily because she was frustrated by encountering the same supply of eligible bachelors on the publicly available dating apps. With the Lox Club, she happened upon a new stock of guys and has been pleasantly surprised, though she has yet to go on a date.

“Honestly, in my opinion, it puts the other dating apps to shame,” said Walker. “I actually already deleted them after being on this thing for a week. It’s just, in my opinion, far superior. You know, the guys on it are, for lack of a better word, they’re young, they’re hot, they’re rich. They’re guys that your grandma would be proud of.”

Still, given its fledgling status, it appears that some kinks still need to be worked out. A 39-year-old public relations executive in New York, who asked that JI not use her name, found out about Lox Club through a friend about six weeks ago, applied and got accepted 10 days later.

“I was really excited at first because it’s not easy to meet like-minded Jewish men, and I tend to not date Jewish men for that reason,” she said, adding that “soulful Jewish men” have been hard to come by in her New York dating experience. But in her time as a member of the Lox Club, she has been disappointed to find that the app has repeatedly presented her with men in whom she has already indicated her lack of interest by swiping left. “I keep getting the same candidates every single day,” she said with dismay.

Kevitch, for his part, vows that he is now hard at work fixing bugs and streamlining the interface. “We didn’t expect this many people to be using it so soon,” he said.

That’s a good sign, at least, for investors, some of whom, according to Kevitch, have signed on in the past few weeks, though he declined to disclose details, citing confidentiality agreements. Marissa Peretz, co-founder of Silicon Beach Talent, a recruitment and consulting firm in Santa Monica, worked with Kevitch on his last startup and decided to invest in the Lox Club when Kevitch brought it to her as a concept and asked for her take.

“I loved it since the beginning,” said Peretz, who also advises the startup. “I spotted this right away, both him and the company, as such a great opportunity, especially given the landscape in a COVID world but also just the fatigue that people have in the world of trying to find love.”

Peretz believes that the Lox Club prototype, whose revenue model is dependent on membership fees, can eventually branch out and cater to a diverse cross-section of users. “I joined with Austin on the basis of that assumption,” she said. “They’re kind of going after every pain point possible for people but starting with, obviously, something tailored more to the Jewish community,” Peretz added. “But I think ultimately, this has the opportunity to lend itself to many different communities out there.”

Kevitch expressed a similar view, noting that he envisioned a physical location for the Lox Club, similar to an exclusive, members-only space like Soho House. “Lox Club in real life would be awesome, like a place to bring dates or chill or meet new people,” he said. More immediately, though, Kevitch says that his company has lined up a number of partnerships for 2021, when in-person gatherings may be acceptable again from a public health perspective. “We’ve been talking to delis and speakeasies,” he said.

Kevitch has a profile on the app, but said he has little time for swiping because he has been busy working to improve the service for other users.

“Lox Club,” he told JI, “has pretty much been my girlfriend all of quarantine.”