Investigating the mysterious man behind the Drudge Report

Matt Drudge is ‘the forefather of the modern populist news movement,’ says the author of a new biography of the media mogul 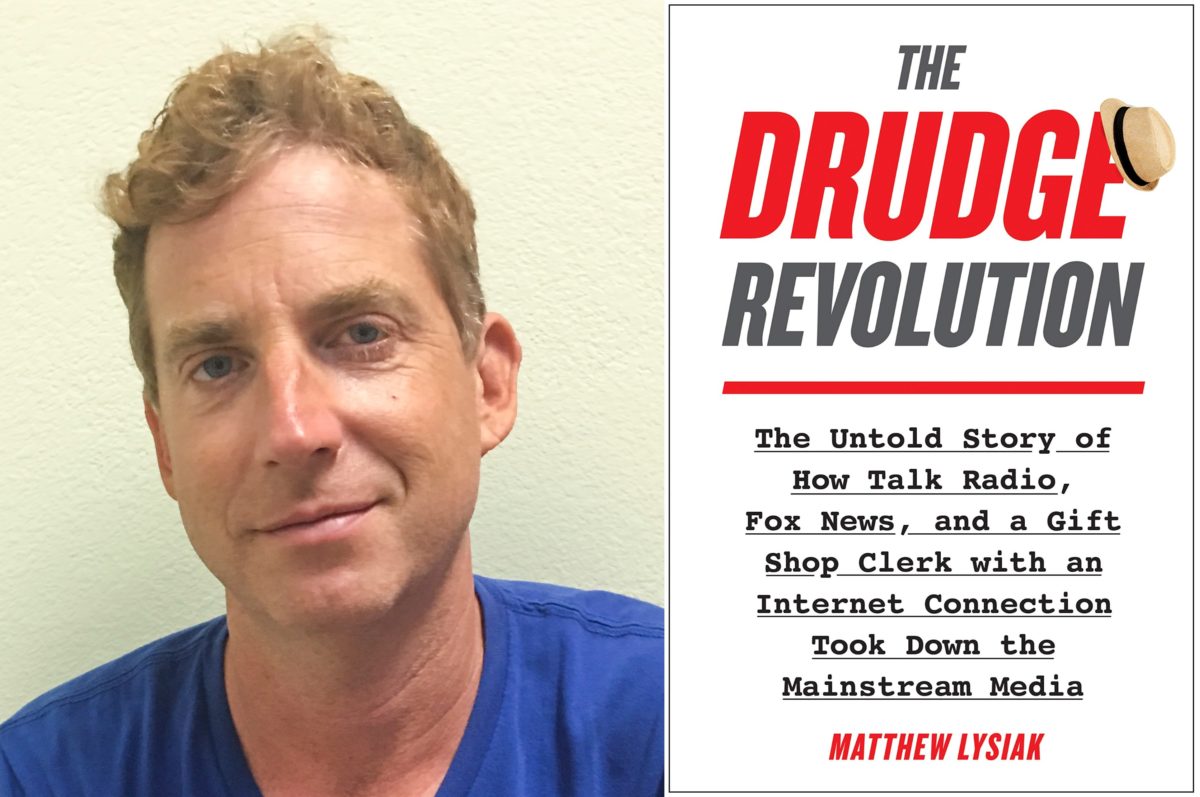 Every journalist knows that a link from the Drudge Report is the ne plus ultra of online engagement, with the potential to send millions of pageviews to a single story.

But few reporters know much — if anything — about Matt Drudge, the press-shy media mogul behind the barebones news aggregation site he launched as a newsletter 25 years ago. Drudge, 53, has rarely been photographed, and he seldom speaks to the media. His last extensive interview, with Alex Jones, was just before President Donald Trump’s election in 2016; he refused to appear on camera.

So it was no surprise that Drudge ignored Matthew Lysiak’s repeated requests for an interview as Lysiak was working on a new biography: The Drudge Revolution: The Untold Story of How Talk Radio, Fox News, and a Gift Shop Clerk With an Internet Connection Took Down the Mainstream Media, which will be published on July 28. Lysiak, a former reporter for the Daily News, sent Drudge “a billion emails” and personally showed up at his properties in Florida and Arizona. He also sent certified letters.

“Absolutely no response,” Lysiak told Jewish Insider in a recent phone conversation from his home in Patagonia, Ariz.

The mystery surrounding Drudge drew Lysiak to investigate his past. “I would say that there’s not a single person in our generation who’s had more of an impact on the way we consume news than Matt Drudge,” Lysiak said. “But what do we know about this guy? I mean, virtually nothing. He’s an absolute recluse.”

Lysiak, 42, made do without his subject’s cooperation, interviewing more than 200 sources including Joseph Curl, “the only full-time employee ever employed by the Drudge Report,” according to the book, which is being adapted into a film.

“The story I found out was really more than the story of this remarkable individual who, through sheer force of will, was able to usurp an entire media industry and kind of turn it on its head,” Lysiak told JI. “But also, it told this broader story about the populist movement in journalism that, I think, you can say directly led to the election of Trump.”

Drudge — who, predictably, did not respond to a request for comment from JI —  came to prominence in the late ’90s when, scooping Newsweek magazine, he broke the Monica Lewinsky scandal, perhaps the most consequential political story of the decade.

“It marked a real transformation in media,” said Lysiak, who referenced a long and somewhat combative speech that Drudge gave at the National Press Club in Washington, D.C., a few months later. “It’s prophetic in a lot of ways,” said Lysiak. “He’s telling all these mainstream journalists who’ve been at these cherished institutions for a very long time that they’re going to be irrelevant soon.”

Drudge, who was born in Maryland, fought hard for his own relevance. “Nothing was handed to him,” said Lysiak, noting that Drudge came from a “dysfunctional family” and didn’t attend college.

Drudge got his first few scoops, Lysiak told JI, by sifting through the trash when he was a gift shop clerk at CBS Studios. “He’s going through the garbage cans and finding the Nielsen ratings a day before they were released publicly,” he said. “It’s genius.”

It was this DIY approach that influenced a whole new generation of young conservative reporters, including Andrew Breitbart, who began his career as an editor at the Drudge Report and went on to help found The Huffington Post before launching his eponymous site.

In his book, Lysiak notes that Drudge formed a close bond with Breitbart because of their Jewish backgrounds. “Breitbart, who had been adopted into a Jewish family, would later tell friends, ‘It is kind of weird that Drudge and I are both secular Jews who are interested in faith issues,’” Lysiak writes. “In Breitbart, Matt saw someone with boundless energy, a skeptical worldview, and who shared a passion for headlines and news.”

But despite his reach, Lysiak believes that Drudge has been given short shrift by the majority of media professionals.

“Matt Drudge is the godfather of all these websites,” said Lysiak. “But I feel like he also doesn’t get the credit he would normally get because he isn’t highly educated, never wanted to go to the parties, didn’t do that scene, didn’t care if he was liked. For example, I worked at the New York Daily News for quite a long time. My editors were constantly refreshing the Drudge Report page, but they would never admit that.”

“It seems like people talk about him like he’s a guilty pleasure,” Lysiak added. “Like, it’s unsophisticated to say you go on the Drudge Report. You go on that site, you’re going to see things about sex robots, natural catastrophes, aliens and then some hard news. You might get the impression that we’re on the verge of an apocalypse every time you click on the site.”

Still, Drudge hasn’t done much to advocate for himself, at least publicly. According to Lysiak, Drudge basically bowed out of public view in 2007, when Philip Weiss published a lengthy New York magazine feature about him. The day after, Lysiak said, Drudge quit his radio show. Then, over lunch with a friend, Drudge decided that it would be best if his website didn’t have a face associated with it.

“He made a Batman reference,” Lysiak said. “And he’s been dark ever since.”

Drudge has been equally quiet about his faith, but Lysiak said that he has occasionally spoken about it. “Matt definitely feels closely connected to his identity as Jewish,” Lysiak said, adding that Drudge often travels to Tel Aviv. “He remarked to one of his friends that he feels a really powerful connection with the history” of Israel, Lysiak said.

In 2018, Drudge clashed with Fox News over coverage of the Pittsburgh synagogue shooting.

“A segment on Fox News this morning where hosts laughed and joked their way through a discussion on political impact of terror was bizarre,” Drudge tweeted at the time. “Not even 48 hours since blood flowed at synagogue? Check your soul in the makeup chair!”

Such disputes are typical of Drudge’s independent streak. Lately, he has turned a jaundiced eye toward the president, coverage that has earned him scorn from Fox News host Tucker Carlson, who in a Friday segment characterized Drudge as “now firmly a man of the progressive left.”

“People make this mistake of looking at him through a political lens, but Matt Drudge’s loyalty is to one thing, and that is his website and page clicks and anything relevant,” Lysiak mused. “If you notice, people are talking about Matt Drudge again.”