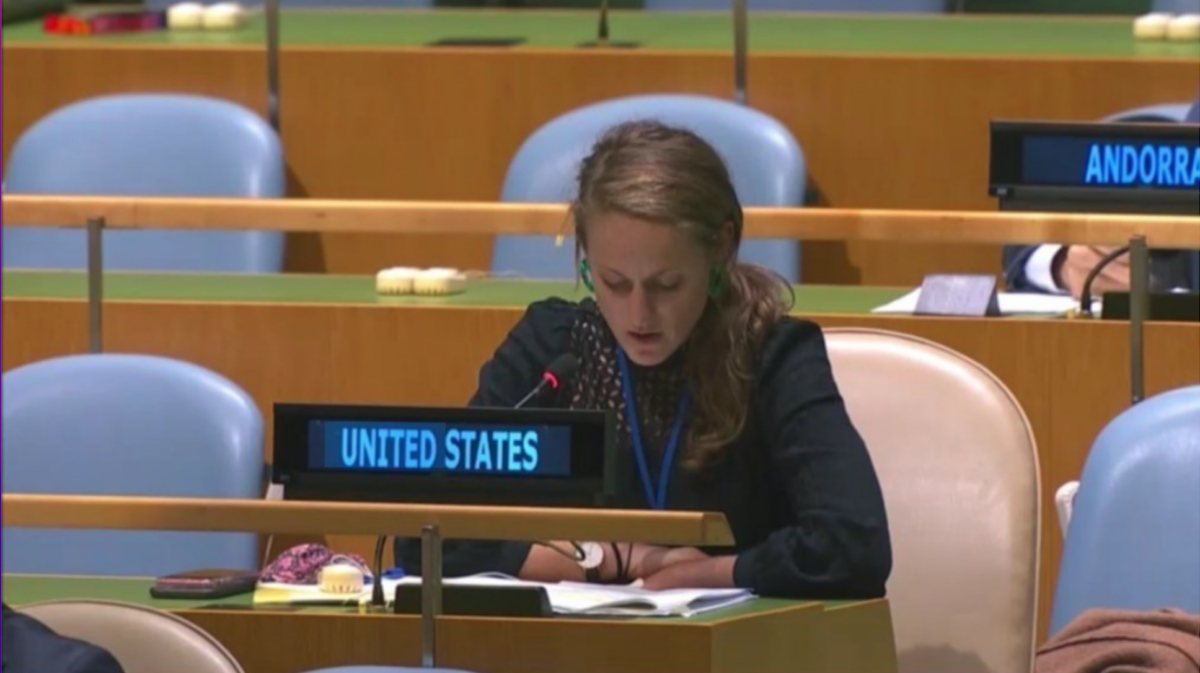 If the Oscars are Hollywood’s biggest night, then the “Sammies,” the Partnership for Public Service’s Samuel J. Heyman Service to America Medals gala, are where the government’s federal employees from around the country come to honor the accomplishments of their peers. During this year’s ceremony, held last night in Washington, a handful of winners were chosen from a pool of around 30 finalists.

One such finalist was Samantha Sutton, a political adviser at the United States Mission to the United Nations and former chief of staff to U.S. Ambassador to Israel Thomas Nides. Sutton, 34 at the time of her nomination,  was chosen alongside three other “emerging leader” hopefuls — the award category for early career employees under 35 who have already made significant contributions to the public good during their short tenure.

“It’s really an honor because, you know, as a civil servant I just find sometimes it’s harder to navigate the federal system and really feel like you’re recognized for the work that you do — particularly in a place like at the State Department [where] I’m mostly surrounded by foreign service officers. So it’s really an honor,” Sutton told Jewish Insider. “Seeing the ranks of the other folks who are nominated, I feel a bit out of my depth, but I’m really proud that I was able to make it to be a finalist.”

Established in 2001 and named after the Partnership’s founder, Samuel J. Heyman, the Sammies recognize individuals who are “breaking down barriers, overcoming huge challenges and getting results” according to the Partnership’s website. For Sutton, a State Department employee for close to a decade, her policy work in the Middle East under the Obama, Trump and Biden administrations earned her a spot on such a prestigious list.

Now the lead negotiator and advisor at the U.S. mission on issues related to Israel, Iran, Lebanon, the Palestinians and other parts of the Middle East, Sutton has held a number of positions during her decade at the State Department.

Most recently Sutton was seconded to Ambassador Nides’ team to be his chief of staff during his first nine months in office— a position she returned from last week. The start of Sutton’s journey, however, began in the Pathways program, where she was an intern. Sutton later worked on the Department’s special envoys team as a staff assistant, special assistant and finally deputy chief of staff before making her way over to the U.S. mission at the U.N., where she’s worked with a number of ambassadors under three separate presidential administrations.

“I think it has been challenging,” Sutton said of navigating Middle Eastern policy under different administrations. “It’s an American national security interest, you know, the security of Israel is closely linked to the security of the United States and what we push for in our own foreign policy. And that’s something that is consistent across administrations, but the level to which we show that support and the actions we take certainly fluctuated greatly, and I think it was certainly challenging at times.”

“Particularly at a place like the United Nations when you’re facing the world every day — you’re not at the State Department in Washington,” she added. “There can be policies that you disagree with, but you have to represent your government when you go, as we say, go across the street to the U.N. and interact with foreign counterparts. So that has been a challenge particularly on the Israel side, but I will say that our support for Israel has never wavered, it’s just how we’ve demonstrated that, there has been a range.”

Despite the difficulties, Sutton’s experience has been generally positive.

“I’ve had amazing opportunities to work with everyone from Martin Indyk, Secretary Kerry, Nikki Haley…And then obviously Ambassador Thomas-Greenfield and Ambassador Nides,” she said.

“Having the opportunity to serve as Ambassador Nides’ chief of staff was incredibly rewarding,” Sutton added. “Being able to see firsthand someone who actually represents what I fundamentally believe in and sort of this pursuing what’s in our interest and in Israel’s interest, and then also pushing for a two-state solution and like helping Palestinians and navigating all of that…” she said, was a “very cool experience,” also noting the that her assignment in Israel took place during a time when a barrier-breaking coalition has been in power.

Sutton became interested in a career in public service while in graduate school at The George Washington University’s Elliott School of International Affairs, where many of her professors worked in government. Her interest in Middle Eastern policy and Israeli-Palestinian relations, however, was born from a number of experiences in the region. During an undergraduate semester abroad with Semester at Sea, Sutton had the chance to visit Egypt, which she recalled as being her favorite stop of the program. She later returned in 2008 as an intern at the Amideast non-profit organization in Cairo where she taught English. She also briefly attended American University in Beirut during the Arab Spring protests.

“I took a class on the Arab-Israeli conflict, because that issue is front and center in Lebanon, obviously, and I became very passionate about it,” she said.

“It’s difficult for civil servants to get promoted in the system and sort of move around and have professional growth opportunities. And that’s been a struggle, I think, for civil servants, and you see many of them leave,” she admitted. “That is not something I’m considering. And I know the Department is working on trying to find ways to help civil servants grow, within the State Department in my case, so I am thinking of ways in which I can sort of build on my experiences.”