Israeli Defense Minister Benny Gantz heads to the U.S. this week for meetings with officials to discuss the state of nuclear talks 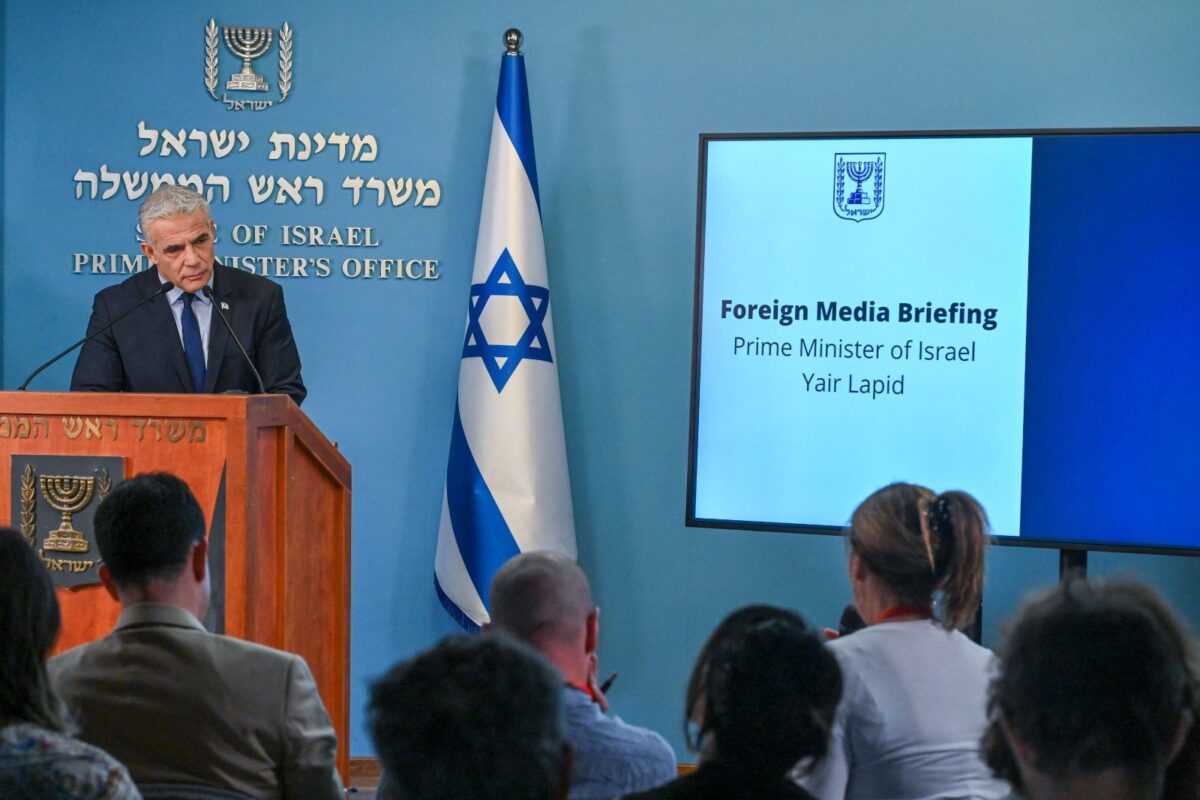 Israeli Prime Minister Yair Lapid on Wednesday ramped up warnings against a return to the nuclear deal with Iran, saying the U.S. and the West are ignoring their own red lines in order to sign “a very bad deal,” that will fail to curb Tehran’s efforts to obtain a nuclear weapon.

Speaking at a press conference in Jerusalem, Lapid said that the new agreement, which according to media reports this week is close to being finalized, must not be accepted as it is currently written.

“In our eyes, it does not meet the standards set by President Biden himself: preventing Iran from becoming a nuclear state,” the prime minister continued, accusing the U.S. and the West of capitulating to Iranian demands and being willing to reach an agreement at any cost.

“This is not the first time this has happened,” said Lapid, who replaced Prime Minister Naftali Bennett two months ago as Israel heads to another national election in November. “The countries of the West draw a red line, the Iranians ignore it, and the red line moves.”

Lapid, whose comments were in line with similar warnings made by his predecessors — both Bennett and opposition leader and former Prime Minister Benjamin Netanyahu — said on Wednesday that Israel was not against an agreement with Iran, but just against this agreement “because it is a bad one.”

Israel believes that the deal being formulated will remove key sanctions that have effectively crippled Iran’s economy, allowing an estimated $100 billion to flow into the country’s coffers. That money won’t go to schools or hospitals, Lapid said, but to “undermine stability in the Middle East and spread terror around the globe.”

“This money will fund the Revolutionary Guards. It will fund the Basij [a paramilitary militia], who oppress the Iranian people. It will fund more attacks on American bases in the Middle East. It will be used to strengthen Hezbollah, Hamas and Islamic Jihad. This money will go to the people who are trying to kill authors and thinkers in New York,” he said, referring to the recent attack on novelist Salman Rushdie, adding, “And of course, it will be used to strengthen Iran’s nuclear program.”

Lapid also said the agreement would endanger the independence of the International Atomic Energy Agency (IAEA) by creating “huge political pressure on them to close open cases without completing a professional investigation.” An unnamed U.S. official said this week that Iran had dropped the demand that the IAEA close its investigations.

The Israeli leader pointed to recent statements by the IAEA’s director general, Rafael Grossi, that Iran had not given credible explanations about the origin of traces of uranium that were detected by the U.N. nuclear watchdog.

Israel’s concerns about the impending deal were also echoed this week throughout the Israeli political and military establishment.

Bennett, who now serves as alternate prime minister in Lapid’s government, released a statement on Tuesday calling on President Joe Biden and the U.S. administration “to refrain, even now at this last minute, from signing the agreement with Iran.”

“This agreement will send approximately a quarter of a trillion dollars to the Iranian terror administration’s pocket and to its regional proxies, and will enable Iran to develop, install and operate centrifuges, with almost no restrictions, in a mere two years,” he said.

On Tuesday, Israeli National Security Advisor Eyal Hulata met in Washington with his American counterpart, Jake Sullivan, and on Wednesday will meet with Deputy Secretary of State Wendy Sherman.

In addition, Israeli Defense Minister Benny Gantz, who is slated to travel to the U.S. this week, will also meet with Sullivan, as well as CENTCOM Commander Gen. Michael Kurilla.

A senior Israeli official told JI that Israel “would do whatever is necessary to make sure Iran is not a nuclear threshold country.”

“We are determined to have the right discussions with the administration to make sure we will not have a bad deal,” the official continued, adding that if this deal is put in place, “there is no way for the West to have control over what the Iranians will do with this money – the only thing we can look at is what they did with the money beforehand and we saw that it was used for terrorism, so we assume they will use it again for terror.”