The Democratic governor of the deeply conservative state has been in the spotlight for his handling of the pandemic and natural disasters. Jewish leaders say he’s also successfully managed a slate of antisemitic incidents 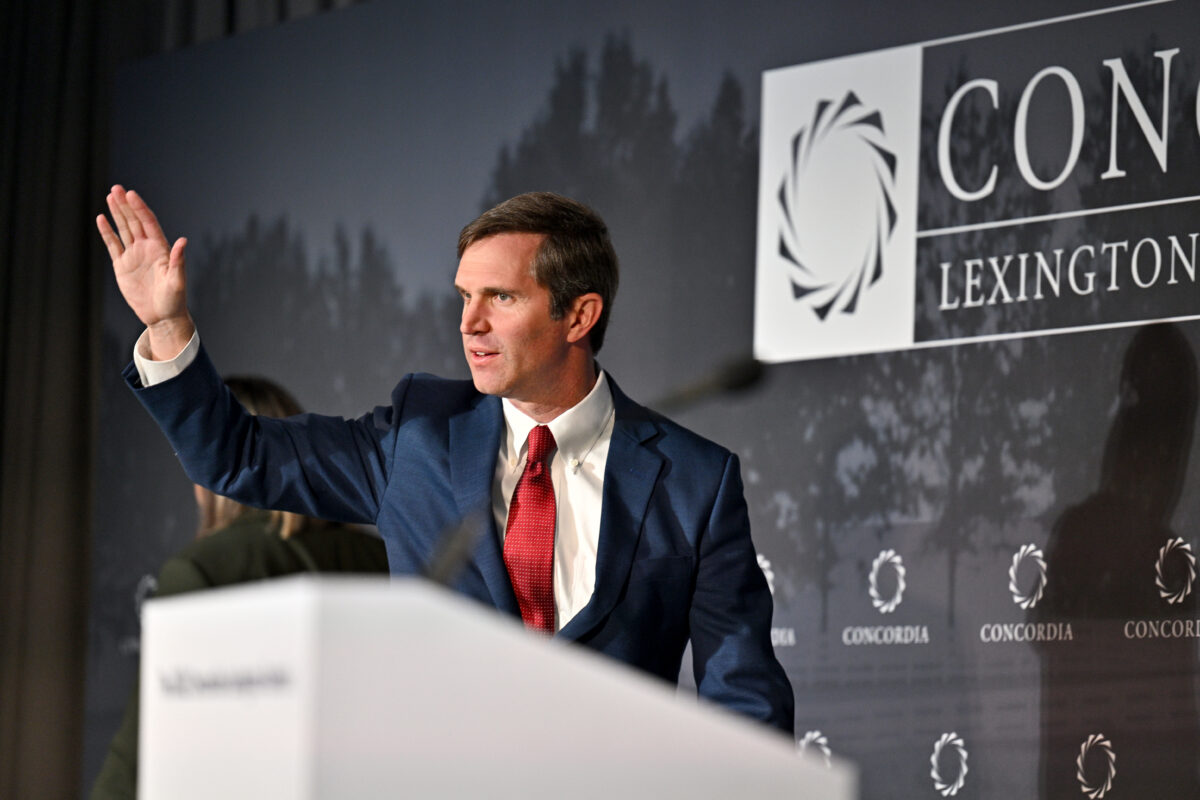 When Air Force One touched down in Kentucky on Monday, it was President Joe Biden’s second visit to the state in less than a year. Both times, Kentuckians were reeling from devastating natural disasters — deadly tornadoes last December and widespread flash flooding in recent days.

The visits weren’t about politics; Kentucky hasn’t gone blue in a presidential race since Bill Clinton’s reelection in 1996. But when Biden stepped off the plane, he was greeted by Andy Beshear, Kentucky’s Democratic governor, who since late 2019 has held power in this deeply conservative state. On Monday, the pair visited flood-ravaged areas, talked to people who lost family members and comforted survivors.

“Sometimes we call the president the comforter-in-chief,” said Rabbi Shlomo Litvin, the director of Chabad of the Bluegrass in Lexington and chair of the Kentucky Jewish Council. “[Beshear] has had a great deal of success tying into that role.”

Beshear was elected governor in 2019 by a thin margin, defeating Republican incumbent Gov. Matt Bevin by just over 5,000 votes. “He was very lucky in that he ran against a governor who was highly unpopular,” said Al Cross, director of the Institute for Rural Journalism and Community Issues at the University of Kentucky and a longtime political commentator. “He was also lucky that he was the son of a former governor who was elected to two consecutive terms and left popular.”

Beshear’s rise in the state can be traced back to his father, Steve Beshear, whose political career began in the 1970s and culminated with two terms as governor, a position he held from 2007 to 2015. Andy Beshear, who is 44, started his career at the law firm where his father was then a partner, and in 2015 was elected attorney general — a position his father also once held. His 2019 campaign for governor highlighted Bevin’s lack of support for public schools at a time when teachers across the state led walkouts to protest budget cuts. (“About half of [teachers] are Republicans,” Cross pointed out.)

A handful of Beshear super-fans hope the governor, whose supporters started calling him “Uncle Andy” during the COVID-19 pandemic, will run for higher office. His name has appeared on some long-shot lists of possible 2024 Democratic presidential candidates, but political observers caution that such a move is unlikely — and Beshear said last year that he would not consider running for the nation’s highest office in the next election.

Beshear has also tried to maintain some distance from national Democrats. “He ran on typical moderate to mainstream Democratic values,” said Cross. “The national Democrats have dug themselves a hole in the state by becoming too much about identity politics and social issues,” which, Cross added, Beshear has “done a fairly good job” of avoiding.

Still, the fact that Beshear is one of the most popular Democratic governors in the nation, in a state where 62% of voters cast a ballot for Donald Trump in 2020, suggests that he is a gifted politician. According to an April poll from Morning Consult, Beshear has a 59% approval rating in the state — at the time, the highest of any Democratic governor.

“He has locked in, at least for the time being, a number of people who probably — certainly — didn’t vote for him last time,” explained Cross.

Soon after he took office, the COVID-19 pandemic hit, and Beshear began to hold daily briefings for the public. “I think in those times of natural disaster and crisis, he is very steady. He’s got this very sort of Mr. Rogers calm about him,” said Melanie Maron Pell, chief field operations officer at the American Jewish Committee and a longtime Louisville resident.

As governor, Beshear built close ties with the state’s 12,000-strong Jewish community. He leaned on those ties during the state’s vaccination drive in early 2021. Litvin and his wife, Shoshi, were at the Kentucky state Capitol for an event, and as they were leaving, Beshear ran after them.

“I stop, and I hear someone saying, ‘Wait up!’” Litvin recalled. Beshear explained to the couple that Kentucky would soon allow people outside the medical field to receive the COVID-19 vaccine, and he asked the Litvins if they would get vaccinated at a public event to “help reassure the community,” said Litvin.

“‘We want to have a diverse gathering of religious leaders here in the Capitol,’” Litvin recalled Beshear saying.

The COVID-19 pandemic was Beshear’s first crisis as governor, but since then natural disasters have shaped his agenda. Last December, a series of deadly tornadoes killed 77 people in Western Kentucky, and now more than three dozen people are dead due to swollen creeks that became fast-moving rivers.

“I’ve got to give him good grades on the floods and the tornadoes,” said Cross. “He’s very much high-profile with a disaster. I think he comes across as being a captain who has his hand on the tiller.”

Beshear has also dealt with a number of high-profile antisemitic incidents in Kentucky. “Each time, [Beshear] had to be the figure speaking out,” said Litvin.

In 2020, a report revealed that a training presentation used by the Kentucky State Police quoted Adolf Hitler at length in a section urging officers to use violence. Beshear called it “absolutely unacceptable.” Later that year, at a menorah lighting hosted by Litvin in Lexington, a person driving an SUV shouted antisemitic slurs and ran over the leg of an individual who stepped in to stop him. The permanent menorah that stands outside the Chabad house had been damaged weeks before.

By early 2021, Beshear worked with Jewish leaders in the state to adopt a resolution condemning antisemitism and adopting the International Holocaust Remembrance Alliance’s working definition of antisemitism.

“We appreciate the fact that he really has been quick to condemn acts of antisemitism, recognizing that antisemitism has no place in the Commonwealth, and that he stands with Jewish community,” said Pell.

In March, state Rep. Danny Bentley invoked the sexual habits of Jewish women during a debate about abortion. He responded to a Democratic state representative’s proposed amendment that would exempt Jewish women from abortion restrictions by alleging that Jews disapprove of abortion because of their approach to sex.

“Did you know that a Jewish woman has less cancer of the cervix than any other race in this country or this world?” Bentley said. “And why is that? Because the Jewish women only have one sex partner, that’s the reason. They don’t have multiple sex partners. To say that the Jewish people approve of this drug now is wrong.”

Beshear did not call out the legislator by name, but he tweeted soon after Bentley’s speech that “There is no place for antisemitism in Kentucky. Not in our communities and not in our government.” Last month, the Bracken County Republican Party wrote on Facebook (and then deleted) a post referring to the “Jewish junta” in the federal government and criticizing Biden’s appointment of Steve Dettelbach, who is Jewish, to lead the Bureau of Alcohol, Tobacco, Firearms and Explosives.

“There was a whole bunch of issues in the last two years,” said Litvin. “So while none of that lies at Governor Beshear’s feet, he is the executive of Kentucky, and he’s been called to respond to it multiple times, and he’s done so incredibly powerfully.”