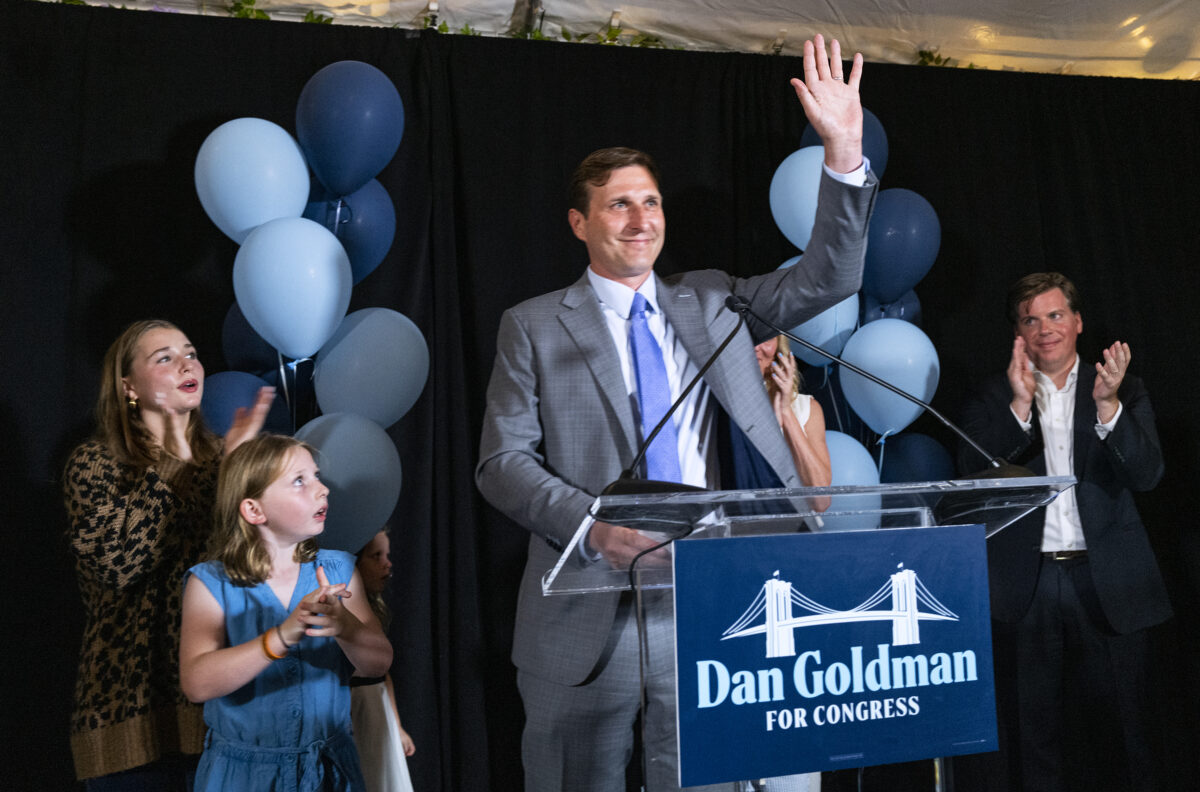 Attorney Dan Goldman stands with members of his family and supporters during an address on the evening of the Democratic primary election Tuesday, Aug. 23, 2022, in New York.

A motley assortment of Orthodox Jewish leaders, local elected officials, old-guard Democrats and other supporters of Dan Goldman, the well-known former federal prosecutor and first-time House candidate, all gathered in a Soho brewery on Tuesday night to await the results of one of the most crowded and unpredictable New York City primaries in recent memory.

Not too long after polls closed, however, Goldman seemed confident that the coalition he built largely from scratch over just the past few months had come through for him, as he arrived at his election night watch party with a narrow lead that continued to hold after he claimed to have won around 10:30 p.m.

“While we will appreciate and respect the democratic process and make sure that all the votes are counted,” Goldman told supporters Tuesday night in Soho, “it is quite clear from the way that the results have come in that we have won.”

Goldman, who rose to prominence leading the first Trump impeachment trial in 2019, declared victory hours before the Associated Press called the race early Wednesday morning, confirming that he had clinched the Democratic nomination in a bitterly contested race for an open House seat encompassing Lower Manhattan and parts of Brooklyn.

With a plurality of 26%, or 16,686 votes, Goldman prevailed by just two percentage points over the runner-up, Yuh-Line Niou, a progressive state assemblymember who pulled in 15,380 votes, according to unofficial results tallied by the city’s Board of Elections. On Tuesday night, Niou said she would wait for the final count before conceding, even as she acknowledged that the outcome was not what her campaign had “hoped to hear.”

In the final weeks of a hard-fought race, Goldman, a 46-year-old heir to the Levi Strauss fortune with an estimated net worth of up to $253 million, overcame a chorus of increasingly pointed attacks from several top rivals, who accused him of harboring conservative views and of using his considerable wealth to “buy” a congressional seat. The first-time House candidate gave his campaign at least $4 million, which helped fund an aggressive TV ad blitz.

Simone Kanter, the communications director for the Goldman campaign, dismissed those charges as misleading in an interview on Tuesday. “This is a very progressive district,” he told Jewish Insider. “There’s been a lot of chatter that Dan carved out a moderate lane for himself. That’s just physically not possible in this district. The reality of the case is that folks have tried to paint him as something he is not.”

Meanwhile, thanks to his prosecution of former President Donald Trump during his first impeachment trial, Goldman had also faced the inverse possibility of some voters viewing him as too liberal, at least among the large segment of Orthodox Jewish voters in the district who are loyal to Trump.

But Goldman, who is himself Jewish, consolidated a leading position in the race with endorsements from the editorial board of The New York Times and — perhaps equally crucial — a coalition of Hasidic leaders in the overwhelmingly conservative neighborhood of Borough Park in Brooklyn. Goldman, however, was heavily favored among Orthodox voters, who made up a crucial base in a low-turnout election.

“Dan is someone who appreciates the diversity of the city, and that includes the Orthodox Jewish community,” said Simcha Eichenstein, a Democratic assemblymember in Borough Park who supported Goldman’s campaign. “I look forward to working with him on the issues where we find common ground.”

If Goldman prevails in the general election, as is expected, he will join Rep. Jerry Nadler (D-NY) as the only two Jewish members of Congress from New York City. Nadler, 75, who now holds that distinction exclusively, won a bruising primary on Tuesday against a fellow long-standing incumbent, Rep. Carolyn Maloney, all but assuring another term in the House.

“My Jewish faith and values have inspired me to dedicate my career to public service, and I look forward to joining Congressman Nadler in Congress to represent the Jewish community in the city and country,” Goldman said in a statement to JI on Wednesday.

For Moshe Margaretten, an Orthodox rabbi in Brooklyn who focuses on humanitarian issues, Goldman’s “background as a prosecutor and a lawyer,” he said, were particularly appealing. “We hope he should be a good voice for criminal justice reform,” Margaretten said in an interview with JI. “We think he’s the right candidate, and we hope to work with him on future reforms.”

Margaretten said he had supported Goldman’s campaign through a bipartisan political action committee, Tzedek PAC, that he launched last year to promote such issues. The group spent just under $30,000 on voter outreach initiatives, including an absentee ballot operation that targeted Orthodox residents of the district who were vacationing in the Catskills and Pennsylvania, according to a consultant who advised the PAC, Diana González.

The effort concluded, she told JI, in a frantic rush to hand-deliver one last cluster of ballots just minutes before polls closed on Tuesday. “We had someone bringing ballots in from the Catskills who got to the Board of Elections Office at 8:59 p.m. with 22 absentee ballots,” González said. “He had us on speaker and we were screaming at him, like, ‘Go to the front desk! Get the ballots in! Get the ballots in!’”

“We just barely got these 22 ballots in on time,” she confirmed, noting that they have yet to be counted.

United Democracy Project, a super PAC affiliated with AIPAC, the pro-Israel lobbying group, disclosed on Tuesday evening that it had quietly contributed $350,000 to a separate super PAC in an effort to boost Goldman over Niou, who last month expressed support for the Boycott, Divestment and Sanctions movement.

The newly created group, New York Progressive, distributed a series of intensely critical mailers targeting Niou for her positions on such issues as affordable housing and Middle East foreign policy. In one mailer distributed days before the primary, New York Progressive highlighted Niou’s endorsement of what the super PAC characterized as “the antisemitic BDS agenda,” while casting the Manhattan lawmaker as “dangerous,” “reckless” and “too extreme for our community.”

On Tuesday night, UDP took credit for funding most of the onslaught brought by New York Progressive, whose contributors have not yet been publicly reported. “We are proud to have played a role in defeating Yuh-Line Niou — an anti-Israel candidate who endorses the BDS campaign against Israel — through our significant support of a local New York super PAC,” UDP said in a statement. “We look forward to working with Dan Goldman on issues important to the U.S.-Israel relationship.”

Instead of funding the attacks using its own name, “it was more effective to contribute to a local super PAC run by political operatives with strong knowledge of the district,” Patrick Dorton, a spokesperson for UDP, said in an email to JI.

Goldman, who first met his wife, Corinne, at an AIPAC Young Leadership event in Manhattan a decade ago, condemned the BDS movement as “anti-Zionist” and “antisemitic” during a candidate forum last month at a synagogue in Park Slope, drawing applause from the crowd. He says he is “pro-Israel” and believes “strongly in maintaining a Jewish, democratic state.”

In his speech on Tuesday, Goldman thanked his “friends in the Jewish community” for their enthusiasm while also recognizing the Chinese-American voters in the district who supported his first bid for federal office. “Tonight, though, is not a victory for myself, or any one person,” he said. “It is a victory for all of us, all of us who will not let authoritarian forces undermine the foundation of our democracy.”

The outcome was “a rebuke” of former President Donald Trump, “who tried and failed again to meddle in an election,” Goldman said in his remarks, alluding to a sarcastic recent “endorsement” from the former president that he had swiftly rejected as “a pathetic attempt at fooling Democrats who are far smarter than Trump is.”

“The stakes could not be higher right now,” Goldman said. “Everything is on the ballot in November — the right to choose, the right to vote, our safety, our planet and our democracy. We must acknowledge the stakes and aggressively fight the rising tide of fascism that has infected the Republican Party.”

Richard Ravitch, the former head of the Metropolitan Transportation Authority who briefly served as lieutenant governor of New York, was casually seated near the bar on Tuesday night before Goldman took the stage at the Soho brewery around 10:30 p.m.

The veteran politico used a Yiddish word to describe a quality that had motivated his decision to endorse Goldman’s campaign last month.