Luria: There’s ‘a calculus’ in Democratic spending in GOP primaries 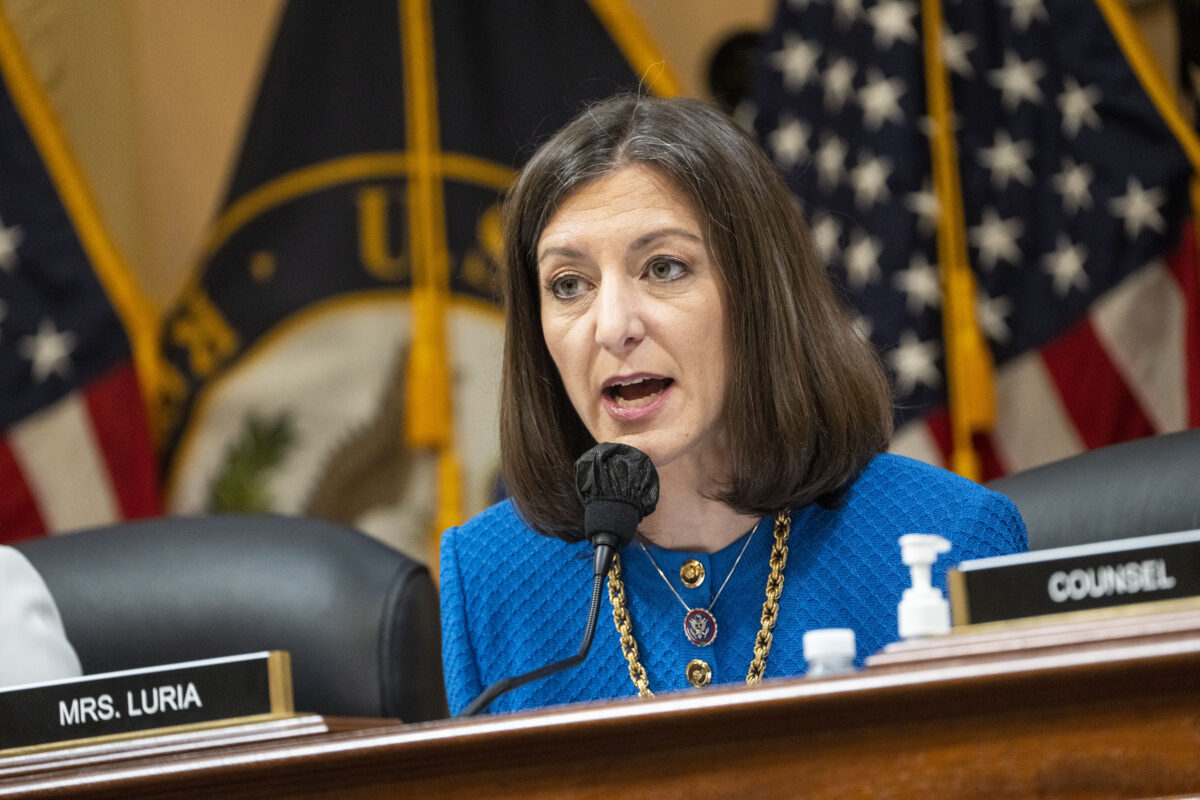 Rep. Elaine Luria (D-VA) speaks during a hearing of the House Select Committee to Investigate the January 6th attack on the United States Capitol in the Cannon House Office Building on Thursday, July 21, 2022, in Washington, D.C.

Rep. Elaine Luria (D-VA) is in the midst of the most high-profile moment of her two-term congressional career. She took center stage in the Jan. 6 select committee’s hearing last week and has emerged as a strong force inside the committee in favor of recommending criminal investigations to the Department of Justice. At the same time, she’s campaigning for re-election in a highly competitive district and walking a fine line on one of the Democrats’ most controversial campaign tactics this cycle.

Speaking to Jewish Insider on Wednesday, Luria blasted her Republican opponent in the upcoming election for failing to say clearly that the 2020 election was rightly decided — but stopped short of criticizing the Democratic Congressional Campaign Committee (DCCC), the House Democrats’ campaign arm, for its highly scrutinized spending this week boosting an outspoken denier of the election’s results in a contentious Michigan GOP primary.

The DCCC has spent $425,000 on ads in Michigan’s 3rd Congressional District appearing to boost John Gibbs — who has outright rejected the election results, defended an antisemitic Twitter user and promoted conspiracy theories — against Rep. Peter Meijer (R-MI), who voted to impeach then-President Donald Trump and has been an outspoken critic of far-right elements within the party.

“[The DCCC] operates independently… separate from anyone’s particular political campaign in that district,” Luria told JI. “And their goal is to win a majority in the House, and there’s a calculus in each district of what they think is going to be the most effective way to do that.”

She noted that she has no “real insight into how [the DCCC] made that decision.” The DCCC and other Democratic campaign organizations have taken to a high-risk strategy of boosting extreme Republicans primary in races nationwide, in the hopes that it will give Democratic candidates an easier path to victory in November in what’s expected to be a difficult election cycle for the Democrats.

At the same time, she praised Meijer and other Republicans who have taken a stand against their own party.

“Just from a moral imperative side, should we be applauding the people who have stood up and been on the right side of democracy? I think so,” she continued. “And I would certainly on a personal level say that Peter Meijer is one of those people. We need more people like him in Congress.”

Luria’s response separates her from some of her Democratic colleagues and allies, including fellow members of the Jan. 6 committee, who have lambasted the DCCC’s move.

Within the committee, Luria has reportedly been a strong voice in favor of making formal recommendations that the Justice Department charge individuals, potentially including Trump, involved in the events of Jan. 6 based on the committee’s findings.

“If we’ve done this investigation, all of the facts that we’ve built up, [and] we feel that our conclusion of that is that it’s likely that criminal activity occurred and it needs further investigation — we can’t investigate that, we can’t charge anyone,” she explained. “We need to pass it along to the people who can look at that through that lens.”

She said that she was encouraged by a report earlier this week that the DOJ is investigating the actions of Trump and his top aides.

Luria added, “I don’t know that the Department of Justice needs us to tell them,” but also said that a criminal referral would be a clear, constructive outcome to the investigation. She contrasted this to the inconclusive report that concluded Robert Mueller’s investigation of Russian interference in the 2016 election that neither indicted nor exonerated Trump for obstruction of justice.

“If we don’t [make a referral], is that going to be a situation where all those involved — not just Trump, but his enablers and other people — [say] that that is some sort of vindication?” she questioned. “Could they afterwards [say], ‘They investigated this for over a year and they didn’t even come to x, y and z conclusion?’”

“I just feel like we need to be clear and unambiguous — and I’m speaking for Elaine, I’m not at this point speaking for the whole committee,” she continued.

Members of the committee have delivered differing messages on the issue of criminal referrals publicly, and Luria told JI that “it’s something we’re still actively talking about.” Rep. Jamie Raskin (D-MD) told the Washington Post recently that Luria’s arguments have shifted his thinking on the issue.

Throughout the investigation, Luria, who hails from a district that the Cook Political Report rates as a toss-up and leans slightly toward Republicans, has said she views the investigation as more important than her own reelection prospects.

But, she told JI, her role on the committee seems largely popular within her district.

Previously, she explained, most people in her home district — which has a large military presence — would thank her for her work for the military and veterans. Now, “99% of the people when I’m out in public who come up to me, it’s ‘Thank you for the work you’re doing on the committee.’” Most of the interaction she’s had directly with constituents, both at events and in chance encounters in the community, has been positive, she said.

Luria has made her Jan. 6 committee work a centerpiece of her re-election campaign — gambling that swing voters will reward, rather than punish her for her role in the investigation.

The Virginia congresswoman said she’s been struck during the process of investigating the events of Jan. 6, at “how extensive the planning was, how deliberate, how premeditated, in the sense that there were all these different phases of this plan.”

“One of the things that really stands out,” she continued, “Is that all of the factors that led to Jan. 6 and the violence on that day, they’re not unique or isolated, and they haven’t gone away.”

While the committee’s final report is not yet complete, Luria previewed some of the legislative fixes she thinks are necessary to prevent another event like Jan. 6: reforms to the Electoral Count Act; changes to Section 230 of the Communications Decency Act, which shields social media companies from liability for users’ content; and changes to the authorities to deploy the D.C. National Guard.

Luria said she had not examined the recent bipartisan Senate proposal to overhaul the Electoral Count Act.

Speaking to JI more than a year ago, when she was first named to the committee, she said the committee must “try to understand why there is this rising tide of instances of antisemitism,” which she saw as linked to the events of Jan. 6. She felt her focus on antisemitism was part of why House Speaker Nancy Pelosi (D-CA) named her to the panel.

Luria told JI this week that, while the committee’s exploration of antisemitism hasn’t featured in public hearings to date, it’s a thread that the committee — particularly Raskin — has explored in its investigation of the extremist groups involved in the events on Jan. 6. She said more of this information would likely be included in the committee’s final report.