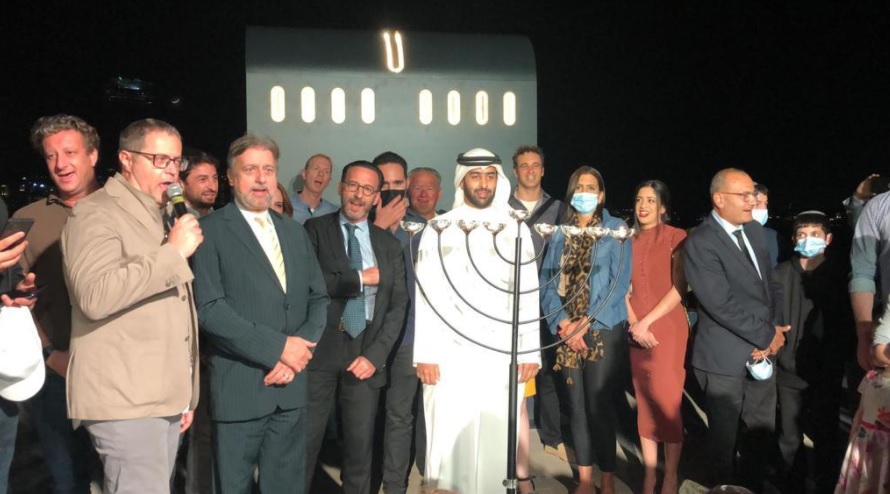 Members of the Jewish Council of the Emirates celebrate Chanukah, 2021. (Credit: AGJC)

The article first appeared in The Circuit.

When Rafael Schwartz moved to Kuwait three years ago for work, he was hoping he’d be able to make quick trips to the fledgling Jewish community in the nearby United Arab Emirates every few weeks if he needed Jewish company or kosher food. But when COVID-19 struck two years ago, he found himself unable to travel.

“My intention was to leave once a month and go to Dubai, where there was a small Jewish community, but the pandemic changed all that and I never left Kuwait,” Schwartz, who is originally from the U.K., recently told The Circuit over Zoom.

Once the virus hit, traveling in and out of Kuwait, which sits at the tip of the Persian Gulf, bordering Iraq and Saudi Arabia, became difficult — and sometimes impossible, when the country closed its borders — and Schwartz soon found himself trying to keep up with his Jewish traditions in a country that does not officially recognize Israel and is known for its institutionalized, often pervasive, antisemitism. An engineer by trade, Schwartz told JI that while he has lived and worked in multiple countries with small or nonexistent Jewish residents, he still found himself yearning for Jewish community.

Then, in February 2021, something like a miracle happened. Spurred by the fall 2020 signing of the Abraham Accords, a set of normalization agreements between Israel and four Muslim-majority countries, the Association of Gulf Jewish Communities (AGJC) was born, connecting Jews in six Persian Gulf countries and providing a Jewish lifeline for people like Schwartz.

In that short time, the AGJC has become the backbone of Jewish life in the Gulf, primarily in the UAE and Bahrain — two of the signatories to the Abraham Accords — and has connected the sprinkling of Jews living and working in Kuwait, Oman, Qatar and Saudi Arabia.

The association estimates there are roughly 1,200 Jews residing in the Gulf, not including a further 1,000 serving there as part of the U.S. military. Among its activities, the organization has played a hand in the growing number of Jewish life-cycle events, helping to organize the region’s first bar mitzvah in 16 years and its first Jewish wedding in 52 years. It has also launched a Jewish dating website, a Beth Din of Arabia (Jewish religious court), and is currently in the process of creating an Arabian Kosher Certification Agency, which will set standards for kashrut throughout all six Gulf countries. The AGJC also offers weekly in-person and virtual programming, including a Friday pre-Shabbat Zoom and events around the holidays.

“There was a big Pesach turnout,” said Schwartz, who logged into the Zoom event from Kuwait. “One of the people who also joined was a Jewish lady from Kuwait City who has lived here for 40 years. She was curious about where to find matzah and the rabbi connected us so that we could meet.”

For indigenous Gulf Jews, such as Ebrahim Daoud Nonoo, AGJC’s president and the chairman of the board of trustees of the House of Ten Commandments, the Jewish community in Bahrain, the growing Jewish life is a welcome change.

“It is lovely,” Nonoo, whose family has lived in Manama, Bahrain’s capital, for more than 100 years, told JI. “The community is a very ancient one but until now we had to send our kids abroad to study, and the problem with that is that they don’t come back. So now we have a community that is growing older and older and there are no children.”

“We are a tiny community and the good thing we are seeing now is that we have a workable way to make Jewish life flourish in the country,” he continued. “The AGJC is a fantastic support for all the communities in the Gulf, allowing us to enjoy Jewish life not just from the point of view of kosher food or religious books, but we also have the input of a rabbi and we have used him for bar mitzvahs and weddings.”

Nonoo, who served as a member of Bahrain’s Shura Council (Upper House of Parliament) from 2001 to 2006, added, “We are in a much better place than before because we no longer need to go to Europe or the United States to find Jewish support, we can now get it from Dubai or we have it here in Bahrain.”

The more the Jewish community grows, said Nonoo, the more it will attract Jews from all over the world to live and work comfortably in the Gulf. And, he added, the presence of a Jewish community in countries where they were absent or invisible for so many decades is essential for outreach to local Muslim populations.

“It is really sad to see a Jewish community die, and we are bringing them back to life,” he said, adding that the synagogue often invites local Muslims to participate in services and events to learn about Judaism.

“When I arrived here a year ago, Jewish life in the Gulf was almost unknown,” Rabbi Dr. Elie Abadie, the AGJC’s rabbi, said in an interview with JI. “It was barren land, but I could see that we could create an orchard and connect Jewish communities and individuals in all of the countries.”

Abadie, who was born in Lebanon and speaks fluent Arabic, said that the UAE and Bahrain are now “fully open” and embracing their Jewish communities, and he is hopeful that “Saudi Arabia will follow suit sooner rather than later, then Oman, Qatar, Kuwait — which will probably be the last the one to open, although there are some rumblings that people want to open up to Jews and Israel.”

Abadie said that the AGJC had connected with individual American Jewish soldiers stationed in Kuwait who have lived there for decades and are married to locals, as well as a few descendants of Jews who now live as Muslims.

“It feels really good watching this and, in a way, it makes you feel vindicated that finally Arab countries have come to realize that either persecuting or expelling their Jews was a historical mistake and now they want to correct that and welcome the Jews back,” he said. “I hope and pray that we will see even more events for the Jewish community in these countries and that more Jews will either go to settle there or come out of the closet, so to speak.”