What’s in a hyphen? Move follows other publications, reflects broader debate about meaning of the term 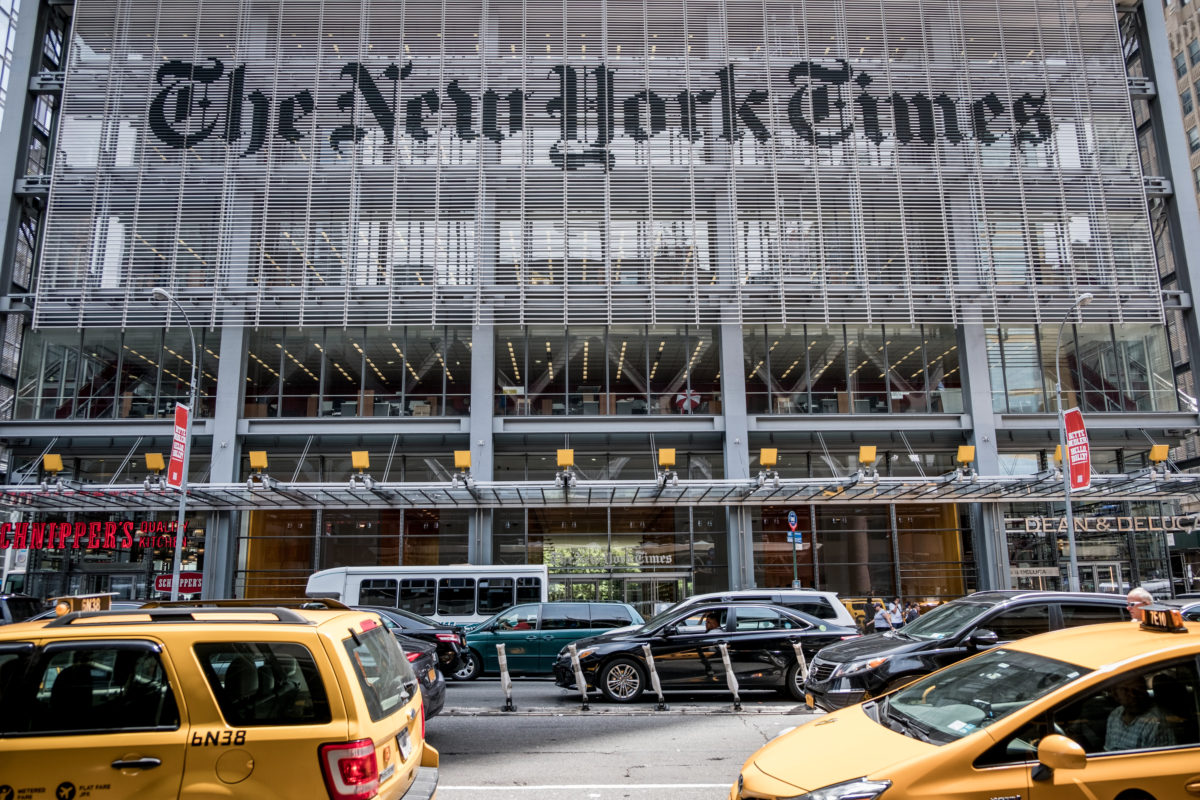 New York, United States of America - July 8, 2017. The New York Times building in the west side of Midtown Manhattan.

Following the example of a number of publications that have made the switch in recent months, The New York Times has updated its style guide to replace “anti-Semitism” with “antisemitism,” Jewish Insider has learned.

The change, which removes the hyphen and lowercases the first S, comes in response to a growing chorus of Jewish activists who have argued that the traditional usage distorts the true meaning of the term.

The paper made no public announcement of the switch, which was formally adopted in August, according to Phil Corbett, the associate managing editor for standards at the Times.

While the new spelling by the paper of record may seem merely cosmetic, it reflects a deeper linguistic debate that has long been brewing within the Jewish community.

In 2015, the International Holocaust Remembrance Alliance began advocating for “antisemitism” over “anti-Semitism” — a term popularized in the late 1800s by the right-wing German polemicist Wilhelm Marr — out of concern that the “hyphenated spelling allows for the possibility of something called ‘Semitism.’”

That idea “not only legitimizes a form of pseudo-scientific racial classification that was thoroughly discredited by association with Nazi ideology,” the IHRA said at the time, “but also divides the term, stripping it from its meaning of opposition and hatred toward Jews.”

With the publication of Antisemitism: Here and Now in 2019, Deborah Lipstadt, the Holocaust historian who was recently nominated to be the Biden administration’s special envoy to monitor and combat antisemitism, helped introduce the discussion to a wider audience.

“It should be spelled as one word,” she said in an interview with JI two years ago. “Its inventor wanted it to mean one thing and one thing only: Jew hatred. He coined this word because he want his word to encompass, not just Jews who are religious, but Jews who have abandoned all links to the religion. He wanted to depict Jews as a metaphysical enemy.”

The Anti-Defamation League also favors the un-hyphenated usage, arguing that the spelling is “the best way to refer to hatred toward Jews.”

Over the past year, mainstream media outlets have followed suit, including BuzzFeed and The Associated Press, the latter of which publishes a style guide that is widely consulted across journalism. Both publications adopted the new spelling in April. (JI switched to “antisemitism” in March of 2019.)

The Times, for its part, alluded to the AP’s decision in an internal note to editors on Aug. 16, which Corbett shared with JI.

“We are dropping the hyphen and lowercasing the S, which is now the style of The Associated Press and is preferred by many academics and other experts,” the memo explained. “Those who favor antisemitism argue that the hyphenated form, with the uppercase S, may inadvertently lend credence to the discredited notion of Jews as a separate race.”

The new spelling follows a separate, more public decision from the previous year in which the Times, like many publications that made the change amid a national reckoning over racial justice two summers ago, began “using uppercase ‘Black’ to describe people and cultures of African origin, both in the United States and elsewhere,” as the paper announced in a June 2020 editor’s note on its corporate website.

“We believe this style best conveys elements of shared history and identity, and reflects our goal to be respectful of all the people and communities we cover,” said the note, which was written by Corbett and Dean Baquet, the executive editor of the Times. “The new style is also consistent with our treatment of many other racial and ethnic terms,” they added. “We recently decided to capitalize ‘Native’ and ‘Indigenous,’ while other ethnic terms like ‘Asian-American’ and ‘Latino’ have always been capitalized.”

So, it seems, had “anti-Semitism,” at least until recently. But the paper still appears to be adjusting to that change, as some articles published since August have employed the old usage.

“It’s hard to get everyone to be completely consistent on style issues like this, so you may still see occasional discrepancies,” Corbett acknowledged in an email to JI. “But ‘antisemitism’ is now our official style.”