A great escape, with help from a Ouija board

In a historical thriller, former NYT obit writer unearths WWI tale that conjures up the rampant spiritualism of the day 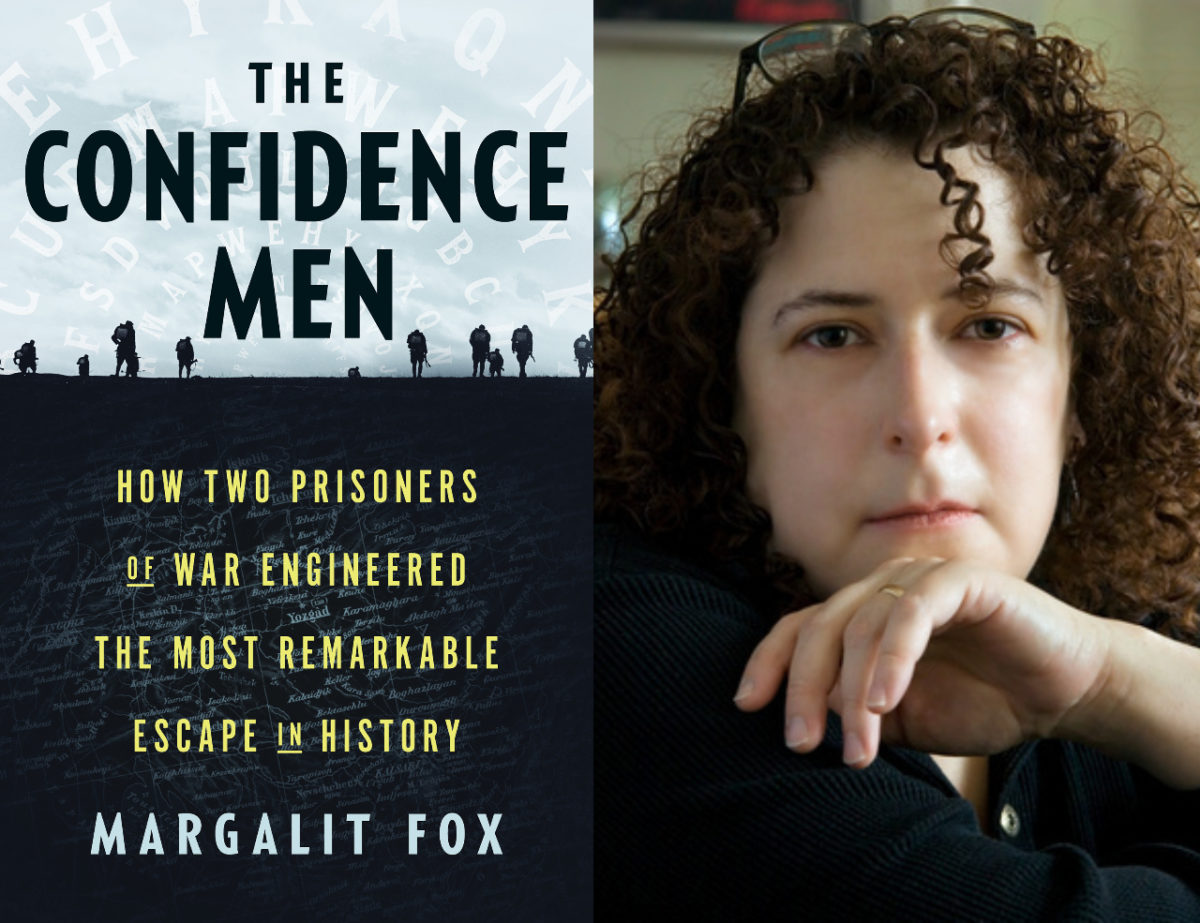 Like many journalists, Margalit Fox delights in the process of exhuming obscure stories and bringing them to life on the page. Fox, however, proved an unusually skilled practitioner during her 14-year run as an obituary writer for The New York Times, where she produced some of the paper’s most elegantly rendered portraits of such uncelebrated but consequential figures as Don Featherstone, who invented the pink flamingo, Herschel Schacter, the first Jewish chaplain at the liberation of Buchenwald, and Leslie Buck, who designed the Anthora coffee cup.

Fox, who is 60, retired from the Times in 2018, but her zeal for unearthing arcane narratives has by no means diminished. In her new book, The Confidence Men: How Two Prisoners of War Engineered the Most Remarkable Escape in History, Fox resurrects a gripping drama from the first half of the 20th century that would likely have remained largely unknown to modern readers had she not endeavored to tell it.

“I have never encountered a story like this,” Fox told Jewish Insider in a recent interview.

The book, a nonfiction historical thriller out today from Random House, is set during World War I and centers on an ingenious escape plan hatched by a pair of British soldiers, Elias Henry Jones and Cedric Waters Hill, who devise an almost unbelievable scheme to break out of a remote Turkish prison camp using only a makeshift Ouija board.

“How could this preposterous scheme actually have worked?” Fox recalled wondering when she happened upon Jones’s little-known 1919 memoir, The Road to En-dor, several years ago. “The book made my hair stand on end.”

To her delight, Fox felt that the story had “really had slipped into a crevice in history.”

“That was exciting,” Fox said, “because if it was in a crevice in history, then I as a 21st-century journalist could have the wonderful privilege of levering it out again for people to see.”

Fox has long been interested in such tales. “I’m fascinated by procedurals,” she said. “My favorite genre really to read in nonfiction or to see movies about are procedurals, whether they’re police procedurals where you see, step by careful step, the detective amassing the evidence and following the clues that will allow him to solve the crime, or even caper films like a bank heist.”

“All of my books are kind of about procedure,” Fox added. “What could be more procedural than an escape plot that is rooted in a con game?”

Fox wrote three books while working at the Times, the first of which, Talking Hands: What Sign Language Reveals About the Mind, was published in 2007. The Riddle of the Labyrinth: The Quest to Crack an Ancient Code, came out six years later, followed by her last book, Conan Doyle for the Defense: The True Story of a Sensational British Murder, a Quest for Justice and the World’s Most Famous Detective Writer, released in 2018.

Fox wrote her new book in just eight months from a study in her Washington Heights apartment, a thermos of coffee at her elbow and a cat on her lap. “If I was doing research, a paperback book propped up in my lap, using the cat as a bookstand,” Fox said. Free of the crushing deadlines associated with daily newspaper reporting, Fox was in a position to devote herself exclusively to book writing, even if she was also enjoying her new work environment. She finished the book last year at the beginning of the pandemic.

“I’m a long-form writer,” said Fox, who left the Times to pursue book-writing full-time. “There’s no better education for being a long-form writer than having to work on a daily paper because, really, all a book is, is a 1,000-word newspaper story gridded up 100 times. I really believe that.”

Fox was raised by secular Jewish parents in what she characterized as “a very rationalist household.” Before she was born, Fox’s parents — whom she described as first-generation Americans and second-generation communists — relocated to Israel during the McCarthyist witch hunts of the 1950s. “My father, who was a physicist, was unable to work in the country,” Fox said. “The only place he could get work was at the Technion in Haifa.”

“I was born on Long Island after things had blown over enough to let them come back to the States,” Fox told JI. “But I got the souvenir in the form of my name.”

At home, Fox’s parents spoke both English and Yiddish. But despite her training as a linguist at Stony Brook University, where she studied before pursuing a journalism degree from Columbia University, Fox never mastered her ancestors’ native tongue.

“I regret deeply that I didn’t acquire more Yiddish when I was young because I loved hearing it in the house,” she said. “But of course, it was the language they spoke when they didn’t want me to understand what they were saying. It would have been much smarter to learn it and understand what they were saying. But you don’t really think things through when you’re 5 years old.”

Fox is married to George Robinson, a former longtime film and music critic for The Jewish Week who has written two books about Judaism.

Fox had originally wanted to write about “pathological imposters” when she began rooting around for a new book topic. But she was so mesmerized by the Ouija heist, which she describes in the introduction to The Confidence Men as “one of the only known examples of a con game being used for good instead of ill,” that she diverted course.

While Jones’s riveting account was detailed on strategy, Fox believed he had failed to explore the psychological conditions that allowed him to manipulate his captors. “I was determined in my research and writing to find out why,” Fox told JI.

She believes she’s cracked the code in her book. “To postmodern people in the 21st century, it sounds absolutely mental to say you can get out of a prison camp with the Ouija board,” Fox said. “But it wasn’t so crazy 100 years ago when they did it. Why? Because spiritualism was a really big going concern,” Fox said, particularly during World War I, “where people had loved ones killed in battle who they were absolutely desperate to contact.”

The soldiers, posing as mediums, profited from that vulnerability. “They didn’t have to get people to make a huge mental leap to exploit that,” Fox said, “because those beliefs were already very much present in the culture and in the air.”

The book includes other supporting characters who could very well have been written about in one of Fox’s obituaries, had they lived long enough.

One was the camp’s interpreter, Moïse Eskenazi, a young and credulous Ottoman Jew, known as “the Pimple,” who imbues an otherwise dark story with some elements of humor as the soldiers use their Ouija board to influence his thinking during séances. At one point, the soldiers slip a potent laxative into Eskenazi’s cup of cocoa after he becomes frustrated with the board. “It was no use sending for the doctor,” Eskenazi says afterward, “because I knew it was all supernatural.”

“I want to get down and kiss the ground and thank the gods for sending me the Pimple,” said Fox. “He is the one who brings all of the comic relief into what could otherwise be a very grim story about captivity and starvation and illness and death and loneliness.”

Fox thinks The Confidence Men is ripe for a Hollywood adaptation, and she is hoping her story will be optioned, noting that it cleaves naturally to a classic three-act structure.

“You have the setup in Act One, then you have everything working towards the escape in Act Two, and then the disaster at the end of Act Two,” she said, “where somebody accidentally rats them out and their whole scheme goes south and they have to quickly get themselves committed to an insane asylum instead, and their time there is Act Three.”

Though the soldiers’ scheme fell apart, they ultimately regained their freedom. “It’s no spoiler to say that, eventually, with a lot of twists and turns and setbacks and unexpected disasters, their plan succeeded,” Fox said.

As for her next book, Fox says she is already working on a new manuscript, due at the end of next year, but won’t reveal much about it. “It’s a book about crime in 19th-century America,” she said. “That’s pretty much all I can say right now.”

Until that book is released, devoted Fox readers can occupy their time with The Confidence Men, or consult the Times, where the 70-odd pre-written obituaries she left behind after retiring continue to be published on a semi-regular basis.

“It really is in the lap of the gods,” she said.