Tom Nides expected to be Biden’s ambassador to Israel

Michael Adler, who had expressed interest in the Israel position, will likely be the admin's nominee for ambassador to Belgium 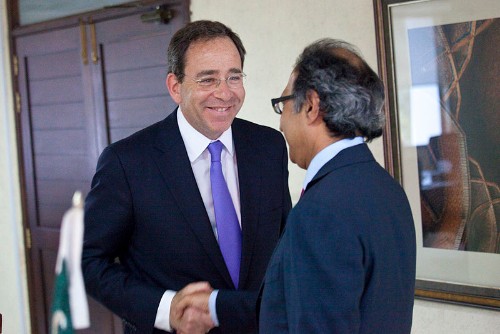 President Joe Biden is expected to nominate Thomas Nides, the former deputy secretary of state for management and resources and the current vice chairman of Morgan Stanley, to be the U.S. ambassador to Israel, The Washington Post reported on Tuesday evening.

Jewish Insider first reported in December that Nides was entering the fray as a frontrunner for the Jerusalem position. The Duluth, Minn., native is close with Biden as well as key members of his Cabinet and national security team. In the Obama White House, Nides was viewed as a pro-Israel voice and someone the Israelis often went to when challenges arose, while also an advocate for humanitarian support for the Palestinians.

Aaron David Miller, a senior fellow at the Carnegie Endowment for International Peace and a friend of Nides, praised the expected selection.

“He went with a very smart, politically well-connected individual with plenty of government experience. A guy who has a real pro-Israeli sensibility but also I think is capable of the kind of detachment that is critically important to finding the balance in the U.S.-Israel relationship between protecting Israel’s interests and protecting ours,” Miller said.

Miller commended Biden for potentially choosing a pick who is not a career foreign service official — as many ambassadors to Israel have been — but who has previous government experience.

“With respect to the protection and furtherance of American national interests and I would argue for the benefit of the U.S.-Israeli relationship, the model that Biden has chosen — smart well-connected ambassador with a lot of government and diplomatic experience — he chose wisely,” Miller said of Nides, who, early in his career, worked on Capitol Hill as assistant to the House majority whip and executive assistant to the House speaker before serving as chief of staff to the U.S. trade representative.

“Nides, to me, represents the perfect choice,” Miller emphasized. “He is smart, he’s savvy and I think he’ll make a great ambassador.”

Biden is also expected to nominate Miami-based developer Michael Adler to be ambassador to Belgium. Adler was seen as a possible nominee for the posting in Israel. The Post reported that Comcast executive David Cohen will likely be Biden’s pick for ambassador to Canada, while Rahm Emanuel, a former White House chief of staff under President Barack Obama, will be the administration’s nominee to the top posting in Japan.

Chris Dodd — a former Connecticut senator who now helps lead the Thomas Dodd Research Center at the University of Connecticut which studies the Holocaust and other human rights abuses and is named for Dodd’s father, a Nuremberg prosecutor — is also expected to be nominated for an ambassadorship.