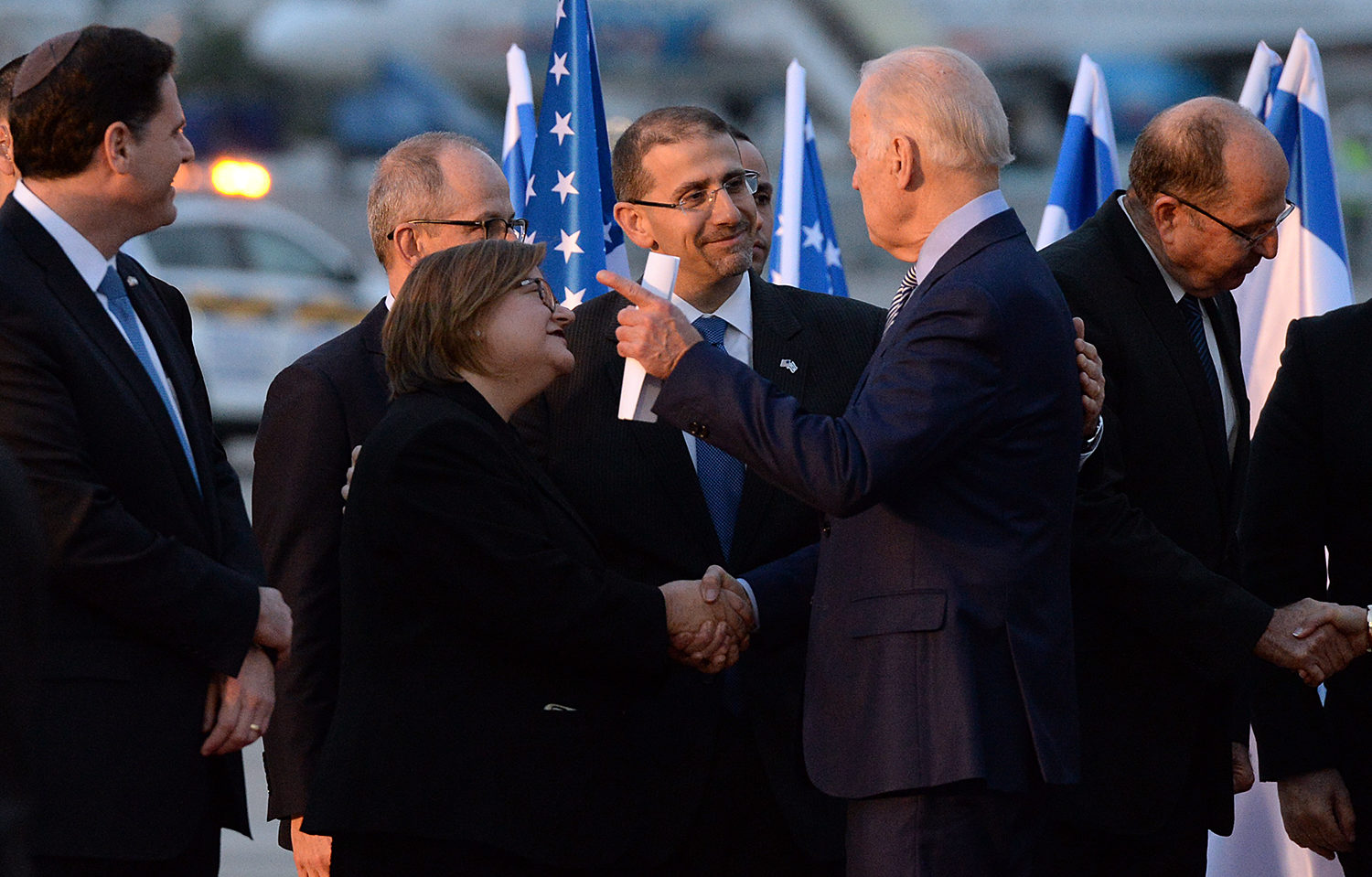 Who will Biden pick to be ambassador to Israel?

Dan Shapiro, Michael Adler, Steve Israel, Rob Wexler and Dennis Ross are all believed to be in the running for the position

When Israeli Prime Minister Benjamin Netanyahu and President-elect Joe Biden spoke this week, the two leaders highlighted their desire to turn a new page. Netanyahu described their conversation as “warm,” and a statement from the Biden-Harris transition team highlighted that Biden “expects to work closely” with Netanyahu “to address the many challenges confronting our countries.”

After Netanyahu’s close alliance with the Trump White House and his rocky relations with the Obama administration, there is indication of the need for a reset between Netanyahu and the incoming Democratic administration. And one of the people who will serve as a middle man to navigate and manage that burgeoning relationship is the next U.S. ambassador to Israel.

With Biden’s victory soon to be certified, attention is turning to his picks for top administration positions — both in the White House and abroad.

Former U.S. Ambassador to Costa Rica Fitz Haney, who now calls Israel home, told Jewish Insider that he expects the position to be among Biden’s first diplomatic appointments in office. “It’s going to be someone very well-versed in Middle East history, foreign policy, as well as the campaign’s approach to the region,” Haney explained, adding that he imagines the selection will be a person “who everyone will be satisfied brings the right gravitas and chops to the position.”

Four years ago, Trump announced his pick for the role in early December, well before he was sworn into office. The appointment of David Friedman, who served as a longtime attorney to Trump and as an advisor to him on Israel policy during the 2016 presidential campaign, was an early indication that Trump was committed to upending traditional U.S. policy and diplomacy on Israel.

Tamara Cofman Wittes, a senior fellow at the Center for Middle East Policy at the Brookings Institution, noted how, in general, the Trump administration used ambassadorships for political appointments. “That has had implications, not only for the relationships but also for American diplomacy, for our embassy staff, for the strength of our State Department,” she explained.

Wittes added that “for those who are concerned about rebuilding American diplomacy, there’s a general desire to have more well-prepared professional diplomats take these roles.”

In conversations with close to a dozen Biden insiders and Mideast experts, individuals who appear to be under consideration for the key posting include Daniel Shapiro, who served as ambassador to Israel for five years under former President Barack Obama and who still lives in Ra’anana; Dennis Ross, a distinguished fellow at The Washington Institute for Near East Policy who served in the Carter, Reagan, George W. Bush and Obama administrations; former Reps. Robert Wexler (D-FL) and Steve Israel (D-NY), Miami-based developer Michael Adler, who is a close personal friend of Biden; and Amos Hochstein, who served in the Obama administration under Secretaries of State Hillary Clinton and John Kerry.

It is assumed by many observers that Shapiro, who was a surrogate for the Biden campaign, will play a senior role on Biden’s foreign policy team — either in the White House, the State Department or as envoy to Israel. Shapiro declined to comment on his future with the Biden administration.

When asked if he’s in the running for the job, Israel laughed. “No comment,” he said.

Israel and Wexler are also candidates for the position of ambassador-at-large for international religious freedom, according to sources.

Wexler declined to comment on a possible appointment for himself, but told JI, “If the reporting is accurate, the president-elect has several excellent choices.” Wexler added that Adler and Israel “would be excellent ambassadors.”

In a recent interview with JI, Adler said he’s committed to helping Biden in any way he can, and while he’s not looking for the title of an ambassador, “if there is a substantive role, and I certainly think that the ambassador to Israel is a very substantive position, I would have to look at it very seriously.”

Adler explained that his main interest is to help the new administration on issues that the Jewish community cares about, which includes strengthening the U.S.-Israel relationship. “If an opportunity arises, and one of multiple positions that are there in the Biden administration is to be involved in the establishment of policy and feel that I really had input, I would have to take that as an honor and as the most serious opportunity,” he said.

Martin Indyk, who served as ambassador twice under former President Bill Clinton, told JI he put Washington in his “rearview mirror” several years ago and wouldn’t return to an administration role.

Aaron David Miller, a senior fellow at the Carnegie Endowment for International Peace and a former peace negotiator, told JI the appointment of a new ambassador will be “extremely important” to manage relations with the Netanyahu government. Miller suggested that the new envoy will be either a foreign service officer or a person with diplomatic experience.

“The ambassador to Israel is now more powerful than ever before. It’s certainly not going to be somebody that is radioactive to Netanyahu,” Miller explained. “They’re going to appoint someone who has credibility with the Palestinians and independence, but who isn’t a red flag to Netanyahu.”

A former U.S. diplomat, who wished to remain anonymous in order to freely discuss the different candidates, told JI that Biden understands the role will require somebody with more experience and not just serve as a retirement reward for a close friend or donor. “It’s not going to be an unusual pick,” said the official.

In an interview on Tuesday, Ross said he “wouldn’t necessarily assume” he would be in the running. “So I’m not really thinking about it,” he told JI. But he maintained that the final pick will be “someone who is seen as being close to [Biden], someone who understands the Israeli political scene well, someone who also can speak for him not just in private but in public — in a way that can enhance his connection and credibility with the Israeli public.”

Haney told JI he is open to a role in the future Biden administration but has no current expectations. A self-described “super-volunteer” for the Biden campaign, Haney said that “if it came to pass that I’d be asked to participate in some form, it would be an honor to do so… I’ve learned never say never to anything.”

Marc Stanley, a trial lawyer from Dallas, Texas, and former chairman of the National Jewish Democratic Council, told JI that he would expect the next ambassador “will try to represent U.S. interests in Israel in a manner more in line with the vast majority of Jewish Americans and the pro-Israel community.”

Stanley, who chaired “Lawyers for Biden” for the campaign and was an early supporter of the president-elect, is frequently mentioned as a possible pick for an ambassadorial job. “If asked, I would be very willing to serve in the Biden administration,” Stanley told JI.

Miller cautioned the Biden team not to repeat the mistake of George W. Bush’s administration when then-National Security Advisor Condoleezza Rice had her own channel with Prime Minister Ariel Sharon’s bureau chief Dov Weissglas. “Biden can find a way to relate to Netanyahu and still empower an American ambassador,” he said.

Wittes told JI that it would be to the advantage of the relationship — on both sides — to have an ambassador who is “reaching out across society, talking to everybody across the spectrum, and building the relationship beyond the official level. That’s going to be a really important component for the U.S.-Israel relationship going forward ― both inside the U.S. for the Israeli ambassador and inside Israel for the U.S. ambassador.”