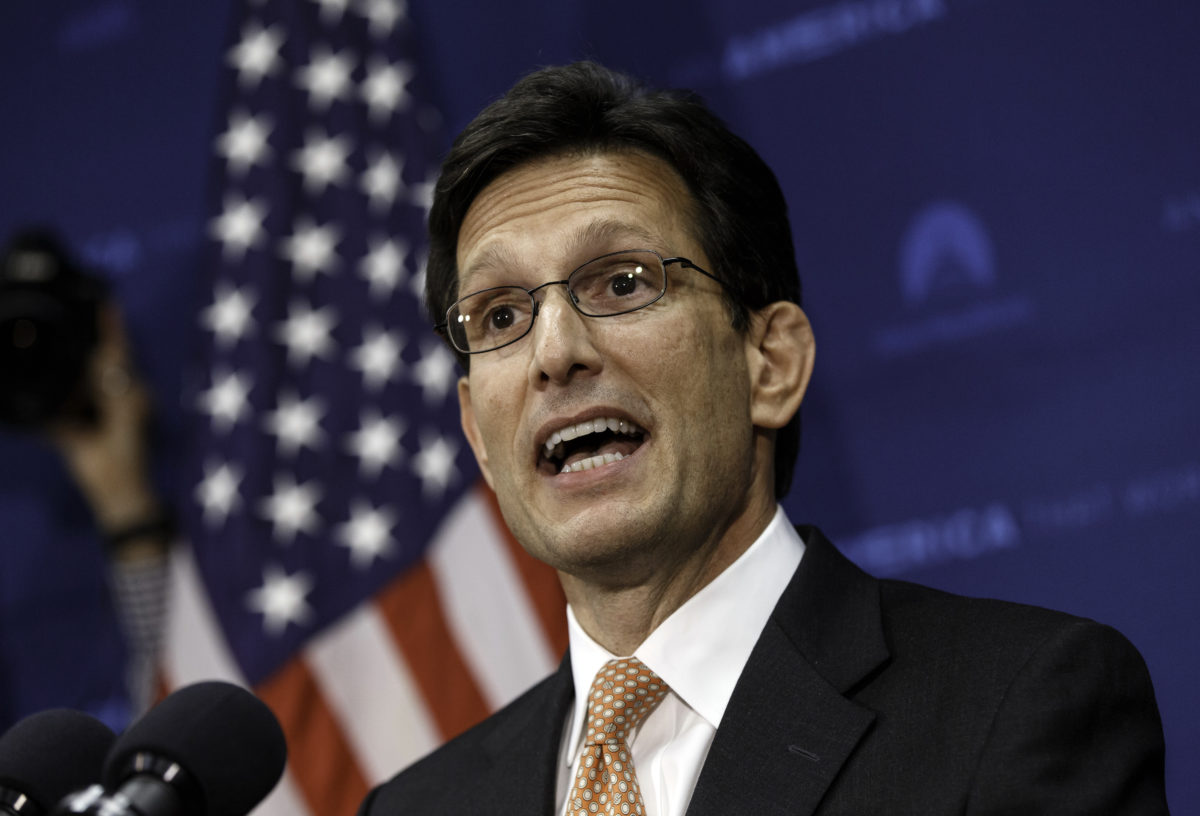 Former Republican House Majority Leader Eric Cantor (R-VA) joined Rich Goldberg and Jarrod Bernstein on this week’s episode of Jewish Insider’s “Limited Liability Podcast.” Cantor shared his thoughts on the state of the Republican Party and the trajectory of bipartisan support for Israel in Washington.

Who leads the GOP: “Clearly Donald Trump has demonstrated that he’ll do what’s good for him, no question about it,” Cantor said. “And so it’ll be an interesting primary season for the midterm elections in 2022 to begin to understand what Donald Trump will do. If he wants to maintain his importance, obviously, he’ll need to play ball with the party, if you will. If he wants to do what’s good for him and believes he can be of outsize [importance] on his own. That’s a different story. And then in the meantime, clearly, the other leaders in the party nationally, [Senate Minority Leader] Mitch McConnell (R-KY) has stated very definitively that it is his job to go in and make sure that Republicans regain the majority in the Senate. My former colleague and successor, [Rep. Kevin McCarthy (R-CA)] has said, without qualms, that his job is to make sure that Republicans regain the majority in the House. So at that point, I don’t think you have a national voice speaking for the Republican Party. And naturally that will come as we then pass the midterms and begin the primary season for the presidential race, which will occur in ‘24.”

Suburban living: Asked about the key steps Republicans would have to take in order to win back the House and Senate, Cantor recalled his early days in Congress with fellow Republican (Goldberg’s former boss) then-Rep. Mark Kirk (R-IL): “I first went to Washington, and I was in Mark’s class, and Mark was famous for the suburban agenda. I will say today, that that’s what my party needs to regain its footing within the electorate that it seems to have lost during the last four, six, eight years. And it is about speaking to the suburban professional voter, because I worry that without those voters, states — like mine in Virginia, and others throughout the country — it’s just becoming increasingly difficult for my party to be electorally competitive….You’ve seen it take place in a state like Colorado, obviously, you’re seeing it increasingly take place in sunbelt states like Arizona and Georgia. So there is a real question.”

Growing up Jewish: “I grew up in a not-so-Jewish community. It was, obviously a suburban Richmond city in Virginia, small Jewish population, fairly prominent, but small. And so the district had maybe 1%, or less Jewish [population]. I went to a private school in Richmond, and I went to chapel every single day — it was a Protestant school. I often tell people I was exposed to prayer in school early on. And at the same time, in the afternoon, I’d go to Hebrew school. So it was sort of a great upbringing for me, because I think it brought it closer to the faith and who I am as a Jew… When I first got elected to Washington, being in such a minority within a minority, it was almost like people would parade through my office just to see this individual, like this creature — like a freak show. But again, I do think that I was able to project the notion that both of our parties should be open to all faiths.”

Special relationship: “Increasingly, I think two things happened on Israel. One is, as we saw, the more radicalization, if you will, of the progressive left. That term they use of intersectionality — I don’t quite understand all of it — but if you’re a victim, then we’ll be for you because we’re a victim. And it almost became [like] Israel after the Yom Kippur War proved to the world that it was no longer the underdog, and that it was actually the strongest player, certainly in the Levant, and in the eastern Mediterranean, if not throughout the Middle East… Secondly, during the Obama administration, there’s no question about it, [then-White House Chief of Staff] Rahm Emanuel — [Rich’s] fellow Chicagoan — was unequivocal at 1600 Pennsylvania Avenue: he was not supportive of Bibi [Netanyahu] as prime minister. And the sharing of political talent on both sides that played out in Israel reflected what we had going on here. So I do think those two issues really started to cloud the support for Israel? I do think it’s still somewhat bipartisan, but there’s definitely a lot more difficulty at it.”

Lightning round: Favorite Yiddish word? “The term, for which there is no English word and only Yiddish, is Machatunim” said grandparent-to-be Cantor, who earlier in the episode described meeting his wife, a Florida Democrat, on a blind date in New York City. Favorite part of Passover? “The eighth day at sundown.” Current reading list? Dealing with China: An Insider Unmasks the New Economic Superpower by Hank Paulson, and We Should Have Seen It Coming: From Reagan to Trump — A Front-Row Seat to a Political Revolution by Gerald Seib. Favorite place in Virginia nobody has heard of? “Colonial Trail, which is a new bike trail between Richmond and Williamsburg and goes along the plantation alley along the James River, is a great new addition.”