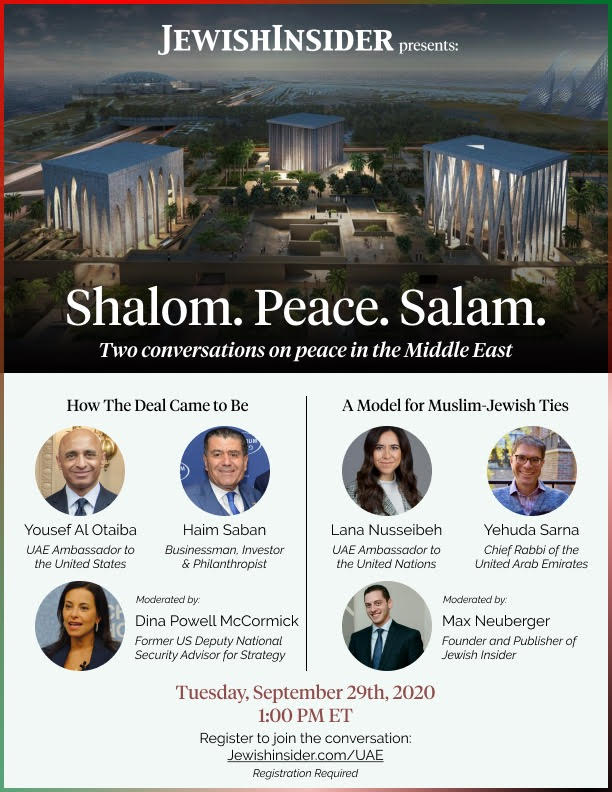 Following the historic signing of the Abraham Accords earlier this week, Jewish Insider will be hosting a pair of back-to-back panel discussions featuring leaders from the United Arab Emirates in conversation with other top JI readers.

On September 29 at 1 p.m. ET, hear from Ambassador of the United Arab Emirates Yousef Al Otaiba in conversation with business leader Haim Saban and Dina Powell McCormick, the former U.S. deputy national security director, on how the peace agreement between Israel and the UAE came to be.

Al Otaiba has met with a number of Jewish organizations in recent weeks, including several in the last few days, but this event will be his first public conversation with a largely Jewish audience. Saban, a close friend of Al Otaiba and UAE Crown Prince Mohammed Bin Zayed, is credited with helping broker the normalization agreement between Israel and the UAE and encouraging Al Otaiba to write a groundbreaking op-ed in an Israeli newspaper earlier this year.

Ambassador Lana Zaki Nusseibeh has served as the Emirates’ representative at the United Nations since 2013. Nusseibeh holds a masters degree in Israeli and Jewish Diaspora Studies from the University of London. Earlier this year, Nusseibeh addressed an American Jewish Committee webcast on combating the coronavirus. For this conversation, she’ll be joined by Rabbi Yehuda Sarna, the inaugural chief rabbi of the UAE, to discuss the growing relationship between the UAE and the Jewish community, both locally and around the world.

Spots are limited, so register now through the form below.

By registering, you agree to receive ongoing communication from JI including the Daily Kickoff newsletter’