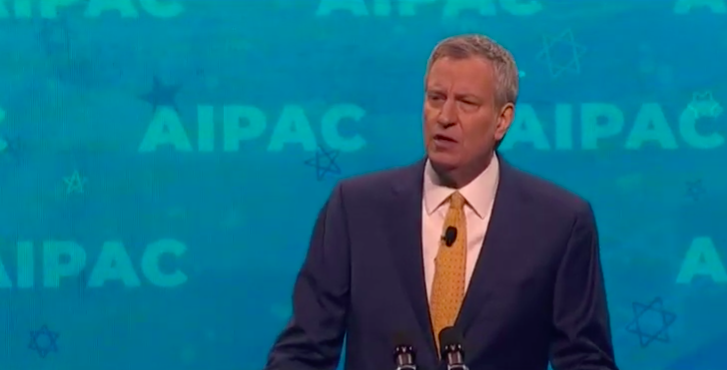 Tech troubles: In a mobile app shared with reporters on Monday, de Blasio was listed as a scheduled speaker. An AIPAC spokesperson told JI that “it was entirely an error on the app that was carried over from last year” and that de Blasio was never scheduled to appear.

In his place: Department of Veterans Services Commissioner James Hendon “will go on behalf of the administration,” Goldstein said.

Campaign narrative: The mayor recently endorsed Sen. Bernie Sanders (I-VT), who announced on Sunday that he plans to skip the conference, alleging that the pro-Israel organization provides a platform “for leaders who express bigotry and oppose basic Palestinian rights.”

Flashback: The New York Democrat addressed AIPAC from the main stage at its Washington conference last year. In his remarks, de Blasio said, “The vast majority of Democrats support the State of Israel. The vast majority of progressives support the State of Israel, and don’t let anyone tell you otherwise.” De Blasio told reporters at the time that it was a ”mistake” for the declared presidential candidates to skip the gathering.