‘The next president will shred’ a new Iran deal ‘on her first day in office,’ the former U.N. ambassador said in a speech at the Christians United for Israel summit in Washington 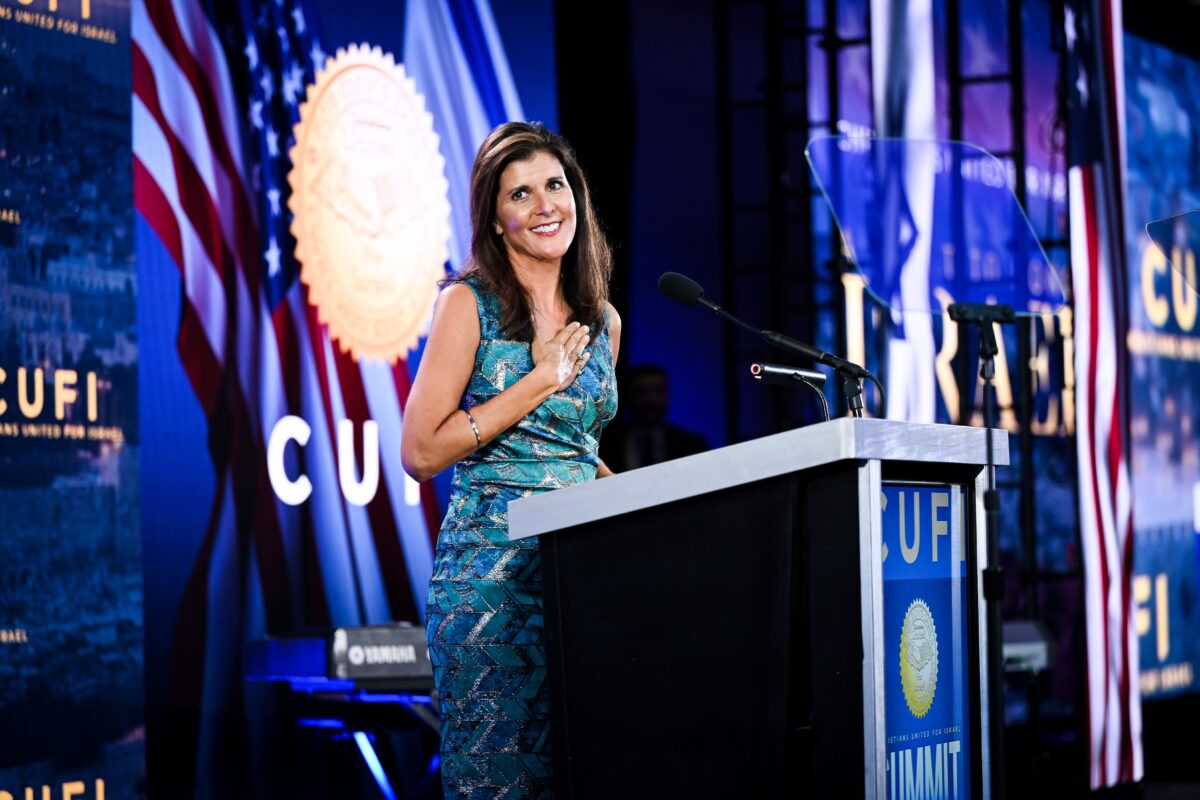 Former U.S. Ambassador to the U.N. Nikki Haley teased a potential run for the White House in 2024 in a speech on Monday at a gathering hosted by Christians United for Israel just outside of Washington, D.C.

Speaking about the possibility of a new Iran deal at the group’s annual summit, Haley, the Republican former governor of South Carolina, said, with a grin and a wink, “If this president signs any sort of deal, I’ll make you a promise, the next president will shred it on her first day in office” (formatting from a pre-delivery copy of Haley’s speech obtained by Jewish Insider).

Haley’s comments were met with loud cheers and a standing ovation from an audience of more than 1,000. “Just saying, sometimes it takes a woman,” she quipped following the applause, deviating from the prepared remarks.

Much of the discourse around the 2024 Republican field has revolved around whether former President Donald Trump will make another bid for the White House. Haley told the Wall Street Journal last October that she would consult with the former president about her plans and “we would work on it together,” but did not explicitly rule out running against Trump, as she had previously in April 2021.

In her remarks to CUFI, Haley also expounded on the Russian invasion of Ukraine, which she called “a reminder that evil is real and it needs to be confronted.”

“We have a duty to support Ukraine,” she said, going on to blame the U.S. pullout from Afghanistan for the Russian invasion of Ukraine. “If America hadn’t failed so miserably in Afghanistan, there never would have been a war in Ukraine.”

“A bluff is exactly what it sounds like right now. It’s embarrassing. America should always speak with strength,” she said. “Clearly, the prime minister [of Israel] doesn’t believe the president of the United States. And neither does Iran. Our allies don’t trust us and our enemies don’t fear us.”

In lieu of a deal, Haley said, “If it ever looks like Iran is close to getting a nuclear weapon, we must act, swiftly and decisively,” and, “At a minimum, we should give Israel everything it needs to defend itself and destroy Iran’s nuclear program.”

She also said that the U.S. “need[s] to work with” Saudi Crown Prince Mohammed Bin Salman.