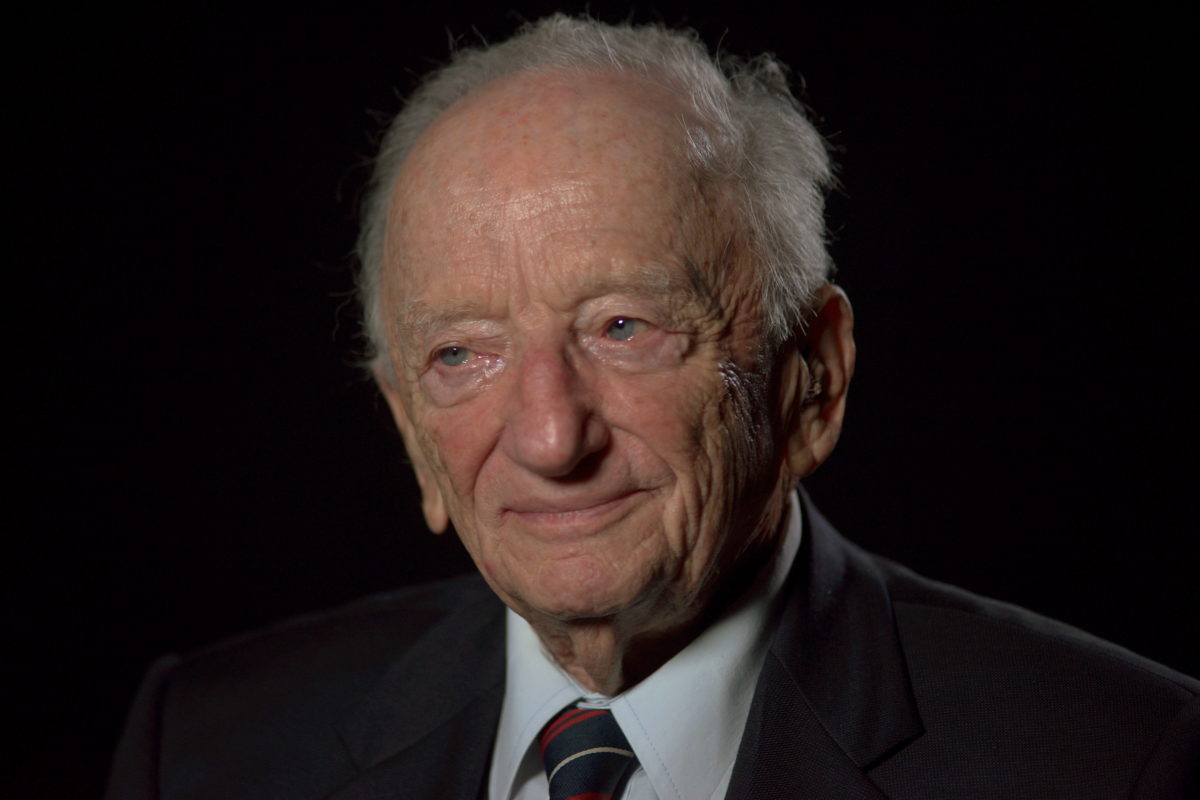 American lawyer Benjamin Berell Ferencz, a chief prosecutor for the United States Army during the Nuremberg Trials at the end of World War II, takes part in the Andre Singer documentary 'Night Will Fall', 2014.

The 101-year-old Ferencz was the lead prosecutor in the Einsatzgruppen Trial — the first of the Subsequent Nuremberg trials in which 20 members of the SS’s mobile death squads were convicted of war crimes and crimes against humanity in a U.S. military court and two others were convicted of membership in a criminal organization. He subsequently became a driving force for establishing the International Criminal Court and an ardent anti-war activist.

“When I heard his story… not only did I find him to just be a remarkable person who’s dedicated so many years to pursuing justice, and the last living Nuremberg prosecutor,” Frankel told Jewish Insider, “but I thought it was also important to bring attention again to the Holocaust.”

Frankel told JI she felt it is important to take opportunities to bring attention to the Holocaust, especially as the number of surivors dwindles and Holocaust denial incidents continue — including in Frankel’s own county.

“It’s important to highlight both the remarkable achievements of Mr. Ferencz and to again bring attention to the Holocaust,” she said. “I just believe reminding people and educating some — there may be some who are not even being reminded, they’re being informed for the first time of the horrors of the Holocaust — is important.”

Ferencz, who is Jewish, was born in Transylvania and immigrated to the U.S. as an infant, settling in Manhattan and attending City College of New York and law school at Harvard. He joined the U.S. Army after graduation, and helped liberate and investigate multiple concentration camps.

“Camps like Buchenwald, Mauthausen, and Dachau are vividly imprinted in my mind’s eye,” he has said. “Even today, when I close my eyes, I witness a deadly vision I can never forget.”

In early 1945, at age 27, Ferencz was recruited to become part of the Nuremberg prosecution team as the Nuremberg Trials were already underway. Ferencz said he lobbied the team to add additional trials as he gathered evidence of the scale of the Einsatzgruppen’s atrocities.

The Einsatzgruppen Trial was his first-ever case as a lawyer — he told CBS in an interview he was unsure if he had even been in a courtroom before the trial — and was described by the Associated Press as “the biggest murder trial in history.”

In his opening statement at the trial, Ferencz suggested the scope of the prosecution, “It is with sorrow and with hope that we here disclose the deliberate slaughter of more than a million innocent and defenseless men, women and children. Vengeance is not our goal, nor do we seek merely a just retribution. We ask this court to affirm by international penal action, man’s right to live in peace and dignity, regardless of his race or creed. The case we present is a plea of humanity to law.”

Ferencz did not call any witnesses in the trial, instead using the Nazis’ own reports of their actions.

“Defendants’ face[s] were blank, all the time. Defendants — absolutely blank. They could — like, they’re waiting for a bus,” Ferencz told CBS. “I’m still churning.”

In a 2005 Washington Post interview, Ferencz reflected that the Einsatzgruppen trial did not come close to the scale of the unit’s crimes.

“There were 3,000 members of these killing squads who did nothing but kill women and children for three straight years,” he said. “These 3,000 men alone were responsible for almost 1 million murders. Do you know how many I brought indictments against? Twenty-two. The rest were never tried.”

He also acknowledged in that interview that he observed and participated in practices in post-war Germany that many would now consider questionable.

“I once saw DPs [displaced persons] beat an SS man and then strap him to the steel gurney of a crematorium. They slid him in the oven, turned on the heat and took him back out. Beat him again, and put him back in until he was burnt alive. I did nothing to stop it,” he recounted. “I suppose I could have brandished my weapon or shot in the air, but I was not inclined to do so. Does that make me an accomplice to murder?”

“You know how I got witness statements?” he added. “I’d go into a village where, say, an American pilot had parachuted and been beaten to death and line everyone up against the wall. Then I’d say, ‘Anyone who lies will be shot on the spot.’ It never occurred to me that statements taken under duress would be invalid.”

Following his work in Nuremberg, Ferencz became the leader of the Jewish Restitution Successor Organization and helped negotiate a key reparations agreement between Israel and West Germany.

He spent the next phase of his life advocating for the establishment of the International Criminal Court, and has lamented that the U.S. did not join the body.

“Nuremberg taught me that creating a world of tolerance and compassion would be a long and arduous task. And I also learned that if we did not devote ourselves to developing effective world law, the same cruel mentality that made the Holocaust possible might one day destroy the entire human race,” Ferencz has said.

Ferencz has remained a restless antiwar advocate preaching a mantra of “law, not war.”

“I will tell you something very profound, which I have learned after many years. War makes murderers out of otherwise decent people. All wars, and all decent people,” Ferencz told CBS.

He has been outspoken against U.S. military aggression in the Middle East. He told NPR in September 2001, shortly after the Sept. 11 attacks, that war in Afghanistan would not be a “legitimate response” to the attacks, and said later that former President George W. Bush should be tried for war crimes.

He speculated in a letter to The New York Times that the 2011 U.S. killing of former al-Qaida leader Osama bin Laden may have been “premeditated illegal assassination,” contrasting the killing with the “fair trial” that “Hitler’s worst henchmen” received in Nuremberg.

Last year, he penned another letter to The New York Times condemning the killing of Iranian Gen. Qassem Soleimani in a U.S. drone strike in Iraq, which he called “immoral” and “a clear violation of national and international law.”

“The public is entitled to know the truth. The United Nations Charter, the International Criminal Court and the International Court of Justice in The Hague are all being bypassed,” Ferencz wrote. “In this cyberspace world, young people everywhere are in mortal danger unless we change the hearts and minds of those who seem to prefer war to law.”

To award Ferencz with the Congressional Gold Medal, Frankel’s legislation must be cosponsored by two-thirds of the members of both houses of Congress.

“Sometimes it takes a little bit to get because you have to get 290, but I feel pretty confident that we will be able to do that,” Frankel said.

A footpath at The Hague adjacent to the Peace Palace was also named after Ferencz, and the U.S. Holocaust Memorial Museum established an initiative in his honor. He’s also been nominated multiple times for a Nobel Peace Prize, most recently in 2020.