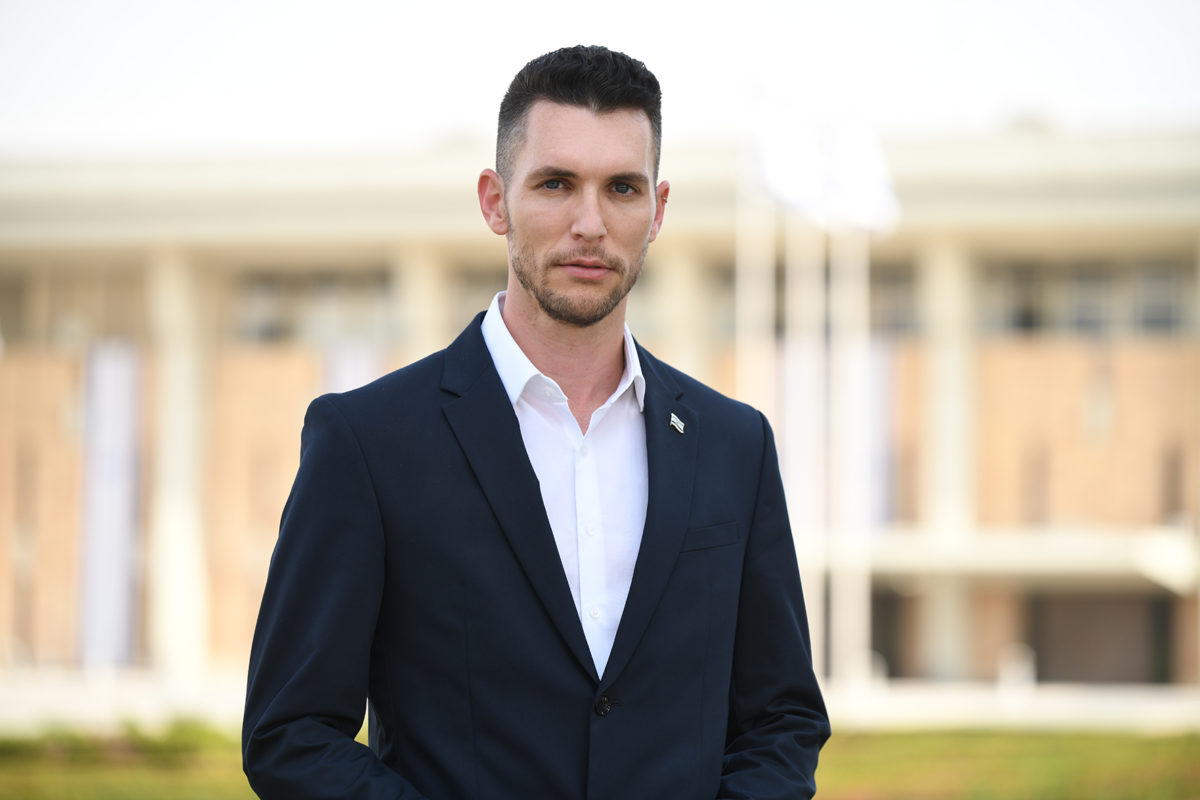 When he heads to Washington, D.C., this weekend on his debut visit to the United States as deputy foreign minister, Idan Roll will be a man on a tightrope.

One of Israel’s more liberal politicians and the government’s youngest high-ranking official, Roll, 37, may be the poster child for a more diverse and pluralistic Jewish state. He is openly gay, married to one of Israel’s biggest pop stars, Harel Skaat, and the father of two children born via surrogate.

But when he meets with American legislators and Jewish groups with the goal of highlighting Israel’s liberal side, he’ll have to carefully balance between what “liberal” means in an Israeli context, and what “progressive” means in an American one.

In recent weeks, Israel has upset leaders in the U.S. by announcing plans to expand settlements in the West Bank and declaring a ban on six Palestinian NGOs for alleged ties with a terrorist group. There is another clash looming, as the U.S. has said it intends to re-open its shuttered Jerusalem consulate that traditionally served as a liaison with the Palestinian Authority, even while Israel vehemently objects.

“I want to start a conversation,” Roll, who arrives in D.C. on November 14, told journalists at the Jerusalem Press Club last week. “Israel is changing and, I believe, we are doing a much better job at promoting liberal values.”

Roll, a member of Foreign Minister Yair Lapid’s centrist Yesh Atid party and former head of its LGTBQ group, believes that despite claims Israel has grown increasingly conservative in recent years, its new, eclectic government “has a lot to offer the world.”

“We are making tremendous strides in the fight against the climate crisis, something that was overlooked for too many years. We are also doing many innovative things to promote LGTBQ rights and women’s rights… we just need to do a better job in conveying the things that we are doing,” said Roll.

Among his responsibilities at the Ministry of Foreign Affairs, Roll has taken up the challenge of reaching out to young leaders around the world, focusing on the United States, and he is aware that his outreach comes at a time when progressives in other places are fiercely critical of Israel and its policies vis-à-vis the Palestinians.

“I understand the way Israel is perceived and I understand our challenges, but I believe in respecting people’s views, and I care about people’s opinions,” Roll said in the briefing. “As someone from a centrist party, I believe in compromise — I will tell you about my perspective and you can tell me yours. I don’t believe there have been enough opportunities for that to take place.”

Yossi Klein Halevi, a senior fellow of the Shalom Hartman Institute, said that even though Roll represents Israel’s liberal flank, he might still struggle to find common language with some American liberals, including Jews, and particularly with progressive leaders.

“Many Israelis who are progressive on social issues tend to be center or center-right on security issues and this contributes to the growing disconnect between parts of Israeli and American society that should be in conversation,” Klein Halevi told Jewish Insider.

“Israelis don’t realize how deeply the delegitimization of Israel has gone in certain circles, and for growing numbers of American progressives, it does not matter if you are an LGTBQ Israeli with impeccable social liberal credentials, the very fact you are from an ‘apartheid state’ places you beyond the pale,” Klein Halevi said.

He added: “Israel has been subsumed into the American culture war and we are on the wrong side — we are still playing the game of trying to make a compelling political argument but that is not what it is about anymore. No matter how strong our arguments are, we are culturally toxic for many progressives.”

Roll said he was aware of the tensions. “It is not about winning an argument, the majority of Congress and members of the Democratic Party care about Israel and just want to know more. As someone who got into politics to promote liberal values, I think myself, this government and this ministry have a lot to offer, and we share the same values as the U.S.”

But the deputy minister himself waded into the looming dispute on the re-opening of the U.S.’s Jerusalem consulate by stating recently that he was sure it would not happen. Asked about the basis for such a statement, Roll said: “The American administration understands the complexity on our side.”

“We have the deepest respect for the U.S. administration, and we are talking to them about this all the time,” he added. “They understand our side and we will see how this unfolds.”

On Israel’s decision last month to ban six NGOs due to alleged ties with the Popular Front for the Liberation Palestine (PFLP), Roll explained “there is concrete evidence showing what these organizations did with money donated to them by European donors.”

He outlined details of a trial involving a Spanish woman, Juana Ruiz Sánchez, who was charged earlier this year by an Israeli military court with funneling large sums of donations from European governments to the banned Palestinian militant group.

Roll will meet with the Conference of Presidents of Major American Jewish Organizations, representatives from the Washington-area Jewish community and students and rabbis, according to an individual familiar with Roll’s schedule. A spokesperson for Roll told JI that the deputy foreign minister will hold “meetings with high ranking officials in the White House and State Department along with members of Congress from across the board,” but declined to name the legislators and officials with whom Roll is scheduled to meet.

As Roll’s team works on finalizing his schedule, a question about whether he will reach out during his Washington visit to members of the so-called ‘Squad’ — a small group of Democratic members of the House of Representatives known for their far-left views, as well as their contentious position on Israel — gives a good indication of how the deputy minister views the situation: “No one is blacklisted,” he said.