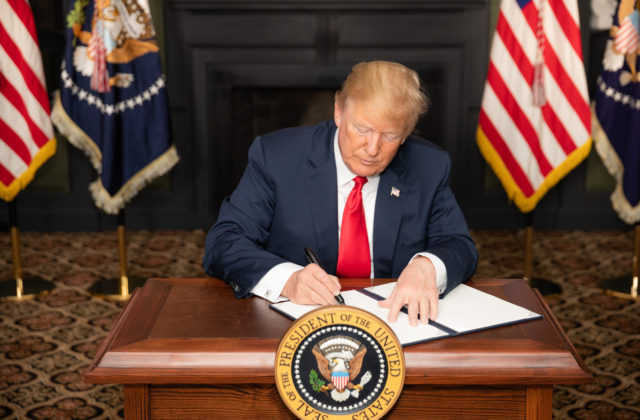 The report, declassified Monday by Director of National Intelligence Avril Haines, concluded that “Iran carried out a multi-pronged covert influence campaign intended to undercut former President Trump’s reelection prospects — though without directly promoting his rivals — undermine public confidence in the electoral process and U.S. institutions, and sow division and exacerbate societal tensions in the U.S.”

It further assessed that Iranian Supreme Leader Ayatollah Ali Khamenei authorized the “whole of government” campaign, which was carried out using “overt and covert messaging and cyber operations.” The report also found that Hezbollah, an Iranian-funded terror group, also engaged in smaller-scale attempts to undermine Trump’s re-election.

Iran’s efforts were “driven in part by a perception that the regime faced acute threats from the U.S.” under Trump, the report details.

The Iranian efforts were aimed largely at “sowing discord in the United States and exacerbating societal tensions” and influencing U.S. Iran policy through methods such as promoting anti-Trump social media content, spreading pro-regime messages and attacking pressure points such as the COVID-19 pandemic response, the pandemic’s economic impacts and domestic civil unrest.

The Iranian campaign was further-reaching in 2020 than in previous election cycles, according to the report, which specifically mentions a previously disclosed campaign by Iranian actors who sent threatening messages to swing-state Democratic voters impersonating members of the right-wing pro-Trump Proud Boys group.

It also discusses several other influence attempts, including disseminating a video demonstrating alleged voter fraud, publishing over 1,000 pieces of online content in the U.S., utilizing “several thousand” inauthentic social media accounts and attempting to gather passwords from U.S. government and campaign officials in order to “gain derogatory information or accesses for follow-on operations.”

Iran’s efforts have not stopped after the election, the report adds, alleging that “Iranian cyber actors were almost certainly responsible” for a website containing death threats against election officials and that Iran is “seeking to exploit the post-election environment to collect intelligence.”

The assessment concluded that the regime’s influence efforts were likely blunted, compared to  previous election cycles, due to greater awareness of the issue, information sharing between the government and social media companies — which led the companies to take down Iranian-operated  accounts, public information-sharing and sanctions against some of the individuals responsible for the efforts.

“Nasrallah probably saw this as a low-cost means to mitigate the risk of a regional conflict while Lebanon faces political, financial and public health crises,” the report reads.

The report also details extensive efforts by Russia to influence the election in favor of Trump and exacerbate domestic divides, and contradicts claims from former DNI John Ratcliffe that China conducted election interference or influence operations.