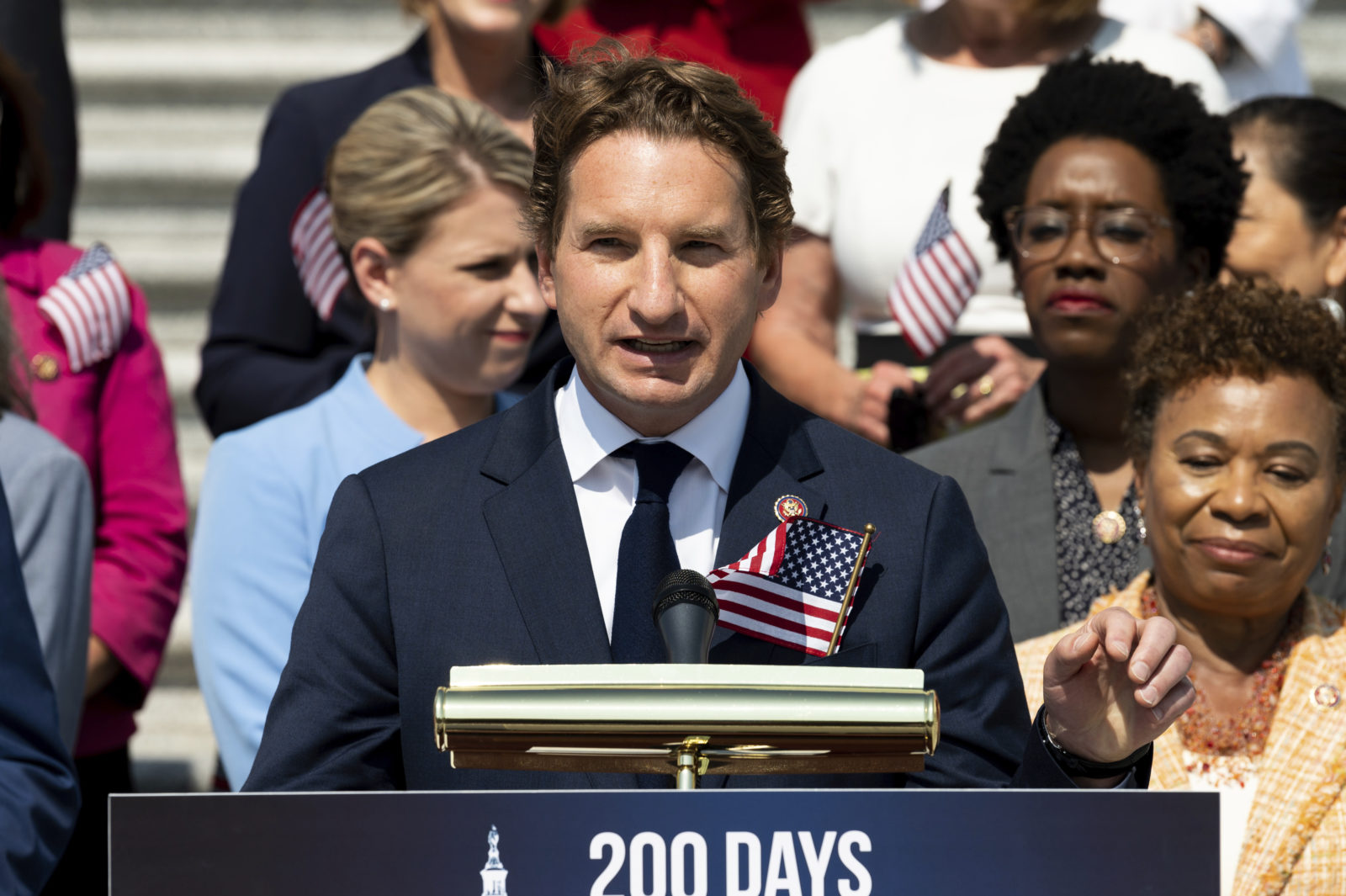 Rep. Dean Phillips (D-MN) is a spirits and gelato entrepreneur, a father and now a newly elected congressman. He’s also the descendant of Jewish refugees who fled to the United States to escape pogroms in eastern Europe.

Phillips is most often seen as the relatable millionaire-next-door — a successful businessman from a well-to-do family who is still down-to-earth and accessible. During his 2018 campaign for Minnesota’s third district, Phillips drove around the neighborhood in a restored 1960s milk truck.

His Jewish identity is at the core of his politics, and he’s willing to invoke that when necessary. In March, Phillips demanded an apology from fellow Minnesota Democrat Rep. Ilhan Omar after she charged that American supporters of Israel have “allegiance to a foreign country.” A month earlier, responding to another controversial antisemitic comment by Omar, Phillips said that she had “propagated dangerous and destructive stereotypes of the Jewish people and the State of Israel.”

Just months into his freshman term in Congress, Phillips took action to combat the many faces of hate — of Jews, of immigrants, and of “the other.” During a press conference in the basement of the Capitol in April, while introducing a resolution condemning white nationalism, Phillips took time to reflect on his great-grandparents’ journey. It was a quiet moment away from the chaos of the Hill and the fights for attention.

“I come from an immigrant family,” he told the small group of journalists gathered, recounting how his great-grandparents told him of their parents fleeing persecution to find refuge in the United States.

Yet Minneapolis was far from a safe haven for Jews at the time, Phillips recounted in an interview with Jewish Insider. The Minnesota lawmaker was told stories in his youth of the “horrid antisemitism” that his great-grandparents worked hard to fight against.

“I have very distinct memories of my great-grandparents reminding me of my eventual responsibility to advocate for those whose voices are quieter or resources are limited, and whose opportunities are not as significant as my own would be one day,” he recalled.

Phillips is surprisingly Minnesotan. It can be hard to reconcile the Midwest twang and ‘aw shucks’ attitude with someone who casually recounts his family’s close relationship with former Vice President and former Minneapolis Mayor Hubert Humphrey.

Phillips’s life is also one marked by tragedy. When he was six months old, his biological father was killed in the Vietnam War, widowing Phillips’s then 24-year-old mother. A photo of his father in his army uniform, the black-and white exposure yellowed with age, sits in a frame on a shelf in the congressman’s Washington, D.C. office.

That understanding of loss informs, in part, his view on foreign affairs. Phillips recalled a town hall meeting held earlier this year in Edina, Minnesota, where he was asked a question by a mother of an active duty soldier deployed in the Middle East.

“She specifically mentioned Iran and her fear — which is, by the way, on the mind of every single person serving in the military and their families right now,” Phillips said. “Every decision that is made, just down the street from here, and even in these buildings, will affect the lives of potentially millions of people, we have to be aware of that.”

Phillips is a member of the House Foreign Affairs Committee. He expresses strong support for Israel, and says there were elements of the 2015 nuclear deal with Iran that he supported, but he was troubled by the sunset clause. He stresses international cooperation, reinforcing positive relationships with allies and working across party lines.

Phillips defines himself as center, or left-of-center politically — joking that his position as center-fielder in the congressional baseball game is a metaphor for his values. Walking this line is important for Phillips, who beat out a Republican incumbent in 2018, and represents both millionaires and refugees in his district.

Sitting in his D.C. office, Phillips brings out a silver-tarnished, rotary telephone, engraved with “J.P.J Phillips,” the initials of his great-grandfather, “from H.H.H” — Hubert Horatio Humphrey.

The two worked together to develop Mount Sinai Hospital in Minneapolis, Phillips recounted. It was the first hospital to allow staffing positions for Jews and other minority groups, mostly African-American, and a more accessible health care option for those who would have been turned away from other hospitals or asked to pay upfront.

“Hubert Humphrey gave my great-grandparents this phone in 1967… and the notion was that my great-grandfather could use that phone to call Hubert Humphrey when necessary,” Phillips explained. “Now I have this phone, reminding me that I always have my phone open to people who need to call me for that same line of communication.”

Phillips said he plans to join the Black-Jewish Caucus, a bipartisan initiative launched in early June.

“I’m excited by that because, back to my upbringing, the same great-grandparents I’m talking about, would share often with me how the Jewish community and the Black community in Minneapolis, the Twin Cities, would walk hand in hand, literally, down Plymouth Avenue after the riots in the late 1960s,” he recalled.

Phillips’s interest in politics began young. He jokes that his grandmother Pauline, the blunt, often tounge-in-cheek columnist Dear Abby, anointed him a Democrat at age 11.

“I remember, for the first time, watching the election returns in 1980… that was the first time in which the political seeds, I guess you could say, were planted in me — by my grandma,” he said.

He interned for Senator Patrick Leahy (D-VT) when he was in college but then went into the family business. “I recognized that I would not begin my career in Washington or in public life, but that if one day — if the opportunity perhaps arose, or the need existed — that I would stand up.”

Despite being heir to the fifth-generation Phillips Distilling Company, he hit the ground at entry-level, making deliveries and working in the production plant and warehouse before becoming the company’s chief executive. In 2012, he co-invested in the start-up and premium gelato company, Talenti. In both companies, he said, the notion is about providing “an affordable luxury.” The Distilling Company brought Belvedere Vodka to the U.S., Talenti brings gelato.

“We zigged when others zagged,” he said, “and we took good care of people along the way and that was a hallmark of how we did things.”

And after 25 years working for the family business, Phillips felt the call of political life.

“During the 2016 [presidential] election campaign, I was so appalled and disgusted, and frankly embarrassed for our country — relative to the tone and tenor of that election — and of course the outcome concerned me deeply,” Phillips explained.

“My daughters that night, who were 18 and 16, Daniella and Pia — their reaction left an indelible mark on me,” he continued. “They were fearful, they shed tears, they expressed fear, and the next morning I woke up and at the breakfast table, I promised them that I would do something. I raised them to be participants, not just observers, and I felt the responsibility to put my feet in the street, if you will, and that’s exactly what I did.”

Phillips says entering politics was “the best decision I ever made in my life. That’s what inspired me. There was a moment [on election] night that I thought, I can no longer just watch. I have to be a participant.”

The freshman congressman says one of his priorities is getting special-interest money out of politics. To that end he opted to forgo all donations from Political Action Committees or other campaigns. Phillips is asking for this type of pledge from all members, though he concedes he’s in a better position to refuse big money than his colleagues.

“I understand why not everybody is in the same position that I am, but it does not mean that it’s not possible for every single one of the 535 to do it the same way,” he said. “That’s a choice. And it is possible, and I raised over $5 million from individuals in my last campaign.”

According to OpenSecrets.org, a non-profit political research organization, Phillips donated about $1.35 million to his own campaign and raised over $3 million from large individual donations, and about $1 million from small donations of $200 or less.

Phillips said a radical shift is needed in the barriers to entry and the amount of money necessary to run a campaign.

Phillips says that serving in the 116th Congress is the best job he’s ever had. He’s a member of the Congressional Problem Solvers Caucus, a group of about 40 members who work to find bipartisan solutions on legislation, “which is the best hour I spend every single week.”

His campaign slogan, and the sign that hangs outside his office door, proclaims “Everyone’s invited.” It’s his promise and ethos to focus on personal interactions rather than wars of words over social media.

Later, over email, I asked Phillips what advice he would seek from his grandmother, in her role as “Dear Abby.”

He wrote, “Dear Abby — Every time I turn on the TV or go online, people are yelling and screaming at each other about politics. How can we disagree without being disagreeable? — Disappointed Dean.”