Matt Lieberman won’t back down 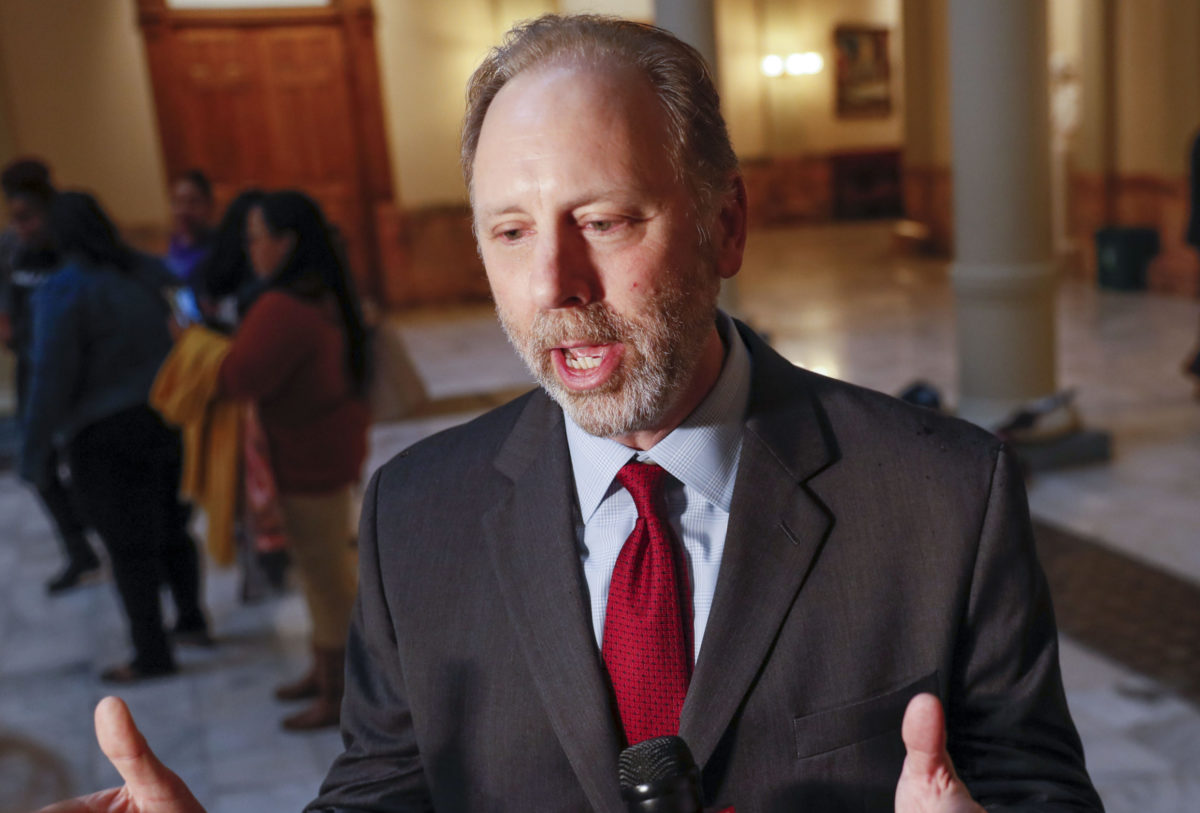 Matt Lieberman speaks with the media Wednesday, March 4, 2020, in Atlanta, after qualifying to run for U.S. Senate in the special election to fill the seat held by former Sen. Johnny Isakson.

The Atlanta businessman running in Georgia’s hotly contested Senate special election is facing mounting pressure to bow out of the race as polls show he lags far behind his Democratic opponent, Raphael Warnock. Lieberman, a fellow Democrat, has been accused of spoiling Warnock’s chances as Warnock seeks to clear the 50% threshold that would allow him to circumvent a January runoff and flip the seat during the first election year in decades in which Georgia is ever so slightly trending blue.

A new Civiqs poll, released today, is the first public survey to suggest that Lieberman may be preventing Warnock from obtaining a majority and avoiding a runoff. The poll puts Warnock, senior pastor of Ebenezer Baptist Church in Atlanta, at 48%, with Lieberman pulling in a paltry 2% of the vote. The leading Republicans in the race, Sen. Kelly Loeffler and Rep. Doug Collins, are hovering in the low 20s.

“I haven’t seen that poll, so I just can’t really comment on that,” Lieberman told Jewish Insider in a phone interview on Tuesday morning.

Still, Lieberman added his firm belief that it would be impossible for any candidate to pull in more than 50% of the vote and that the election will likely head to a runoff with or without his involvement in the race. “Math is math, math is not partisan, it is actually fact,” he said. “So my reflexive reaction would be that that poll is an outlier.”

Lieberman, a former schoolteacher and the son of former Sen. Joe Lieberman (I-CT), is holding out hope that his prospects are better than they appear. “While the polls are not overly encouraging right now, there are probably 15% of voters who are undecided, and I’d like to believe I have a better-than-even chance at a good chunk of those,” he said. “So you never know. You never know what’s going to happen.”

He said he wasn’t worried about the possibility that he was limiting Warnock’s chances in spite of repeated calls for him to step away from the race, which have only grown more intense in the week leading up to the election.

“It’s been fear-mongering all the way through,” Lieberman insisted. “I don’t believe that there’s ever been a mathematical chance of that, and I think another good sort of acid test for what I’ve been saying is the fact that the Republicans, Collins and Loeffler, have continued to train their fire almost entirely on each other and almost not at all on Warnock because they understand that their prospects are completely tied to being the top Republicans. So that’s what they’re focused on. The top Republican and the top Democrat will advance. And that’s just the way it is.”

Lieberman predicts that next week’s regular Senate election in Georgia — a tight race between Sen. David Perdue, the Republican incumbent, and Democrat Jon Ossoff — will also likely advance to a runoff.

Musing on the races, Lieberman delivered a strongly worded critique of the growing number of Democrats who are calling for him to withdraw. “For all the attention that this seat has gotten, and for all of this absurd pressure that entitled left-wing activists have been pushing against me to do whatever,” he said, “I think it’s also compelling to note that in the other race, where there’s only one other candidate running, it’s also likely to go to a runoff — which just, again, I think, based on math of Georgia politics, shows the absurdity of the fear-mongering.”

He continued, “Not to mention that many of these same people are, out of the other side of their mouths, enormous champions of democracy and participation and people being able to vote their conscience, and yet, they want every candidate that isn’t their preferred candidate to disappear, which would deny, whatever, half a million, a million or more voters their first preference of who to vote for. That doesn’t seem to bother these pro-participation activists as long as it serves their ultimate end.”

“I see a lot of this pressure as exposing that part of the party as not so much champions of democracy,” Lieberman concluded, “but people who want to accomplish a specific end, and who embrace democracy as long as it serves their purposes. And in that way, I think they’re quite similar to Trump, who loves the people and loves democracy as long as he wins. If he doesn’t win, there’s something wrong. And I think the Democratic machine in Georgia is open to the same criticism.”

Warnock is the party favorite and on Monday earned an endorsement from Democratic presidential nominee Joe Biden. The reverend has raised nearly $22 million, according to the most recent filings from the Federal Election Commission, while Lieberman has only pulled in $1.5 million.

“A big difference between me and the reverend is that he is bought and paid for by the Democratic establishment in Washington and in Atlanta,” said Lieberman, accusing his Democratic opponent of running a “very evasive, slippery campaign.” Lieberman added, “He has diligently avoided joint appearances with me, even virtual ones to the extent that he’s actually backed out of what was going to be our final and largest debate this Sunday.”

The WSB-TV debate was canceled last night after Warnock and Loeffler both pulled out.

Terrence Clark, Warnock’s communications director, declined to comment on whether he believed Lieberman was spoiling Warnock’s prospects. “We don’t really have any additional thoughts to share on that,” Clark told JI, noting that the campaign was focused on the race and raising Warnock’s name recognition in the state. “The last few weeks of signs of momentum seem to point to the fact that we’re moving in the right direction. We’re pretty confident in our chances.”

Last October, Lieberman became the first candidate to enter the race to succeed retiring Sen. Johnny Isakson (R-GA). Loeffler was appointed to replace Isakson in early January by Georgia Gov. Brian Kemp, and is now defending the seat as several candidates vie to serve out the remaining two years of Isakson’s term.

Lieberman says his priorities haven’t shifted since he announced his run. “From the very, very beginning, I said I was running as a fed-up citizen of Georgia and for the fed-up citizens of Georgia,” he told JI. “I continue to say that. I continue to make the point that our leaders are all tied up in meaningless bickering and unable to actually produce a product for us.”