The Iran-born human rights activist discusses femicide, the country’s theocratic rise and current protests and how the Biden administration should respond 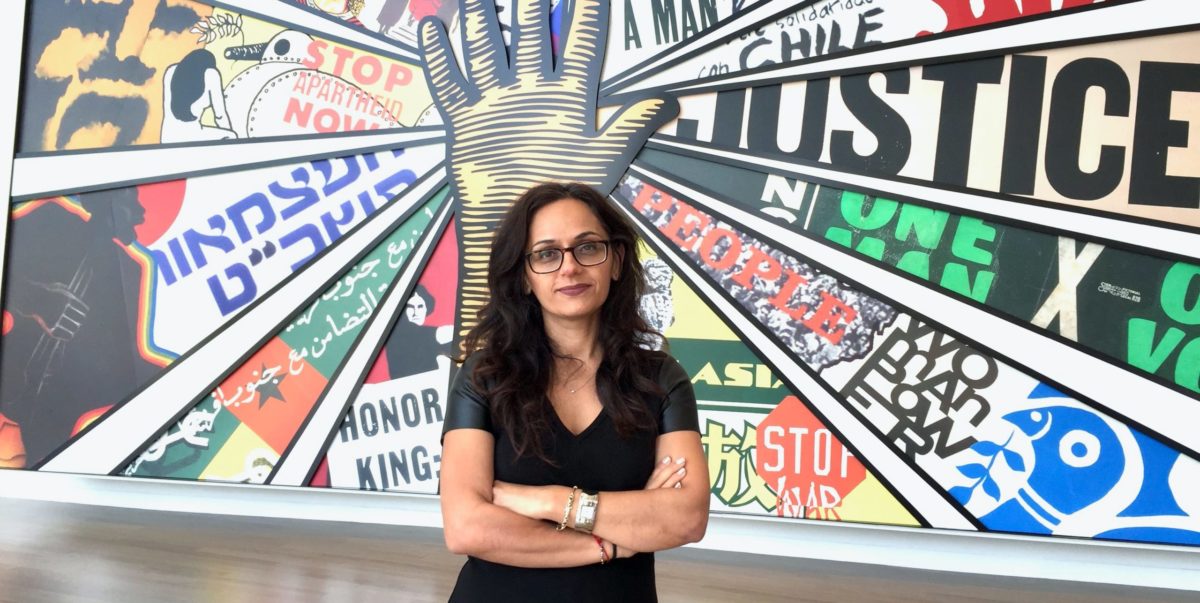 Before the global outcry, before thousands of protestors lined city streets, before refusing a headcovering — among other trivial “transgressions” — became punishable by death, Marjan Keypour Greenblatt remembers what life was like growing up in Iran that had not yet been overtaken by an oppressive theocracy.

She also remembers what it was like directly after.

“Women and men lost a lot of the freedoms that we used to have and used to enjoy,” she continued. “Simple things like freedom to listen to the music you want to listen to, freedom to dress the way you want to dress, freedom for men to wear their hair the way they like to wear their hair. For men, people don’t always talk about it, but there were also restrictions for [the] dress code of men…But really the impact of it was mainly for women and minorities, because all of our freedoms were eliminated and in many ways we were also regarded as lesser than our male counterparts, or as our Shia Muslim counterparts.”

Keypour Greenblatt fled Iran at age 14, initially landing in France before her family was driven out by large-scale antisemitism and xenophobia. They finally settled in Los Angeles — “Teheran-geles,” Keypour Greenblatt joked — and have been in the U.S. ever since.

Today, Keypour Greenblatt is a human rights activist fighting for the rights of women and other minorities in Iran. She is the founder and director of the Alliance for Rights of all Minorities, a non-resident scholar with the Middle East Institute’s Iran Program, founder of StopFemicideIran.org, an advisory board member for the National Union for Democracy in Iran and producer of HOMANITY, the first-ever compilation album of Iranian underground music.

Below is a select breakdown of the conversation.

Marjan Keypour Greenblatt: Many factors were at play at the time. The shah of Iran is really to be credited for a lot of the modernization, and progressive and forward-thinking approaches to create a modern country, a country that was going to look for modern medicine, for modern education, including women in the cabinet…So 43 years ago, or before that, this was very, very progressive and forward-thinking, but the pace of the shah’s movement and vision for the country was not necessarily the pace that the country was able to follow and process. So for a lot of the more traditional sectors of the community of the country, and certain intellectual sectors who felt like there was not enough freedom of expression under the shah’s leadership, they wanted to see some changes and they wanted to create some, in hindsight, perhaps reforms, but what should have been a reform movement during the shah’s period in Iran ended up being a revolution. And given the fact that the shah loved the population and did not want to order the army to draw their weapons against their own civilians, the shah made a decision to leave the country and to give the people seemingly what they wanted, which was an overthrow or an end to his governance.

What we see today on the streets is the complete opposite of that. Today we have leaders who are directly ordering the army, and the police, and the [Islamic Revolutionary Guard Corps], and the many, many different repressive elements that they have at their disposal to draw their weapons against their own people… So what happened? I think that in1979, perhaps Iran was in need of minor reforms, perhaps more freedom of expression and perhaps a little more galvanisation of the poor and the more traditional sectors of the society in order to move forward with a vision and the direction of the shah. But rather, what happened was a revolution, and to be honest with you, most people who voted for the Islamic government did not really know what they were getting.

Richard Goldberg: You are the founder and director of the Alliance for Rights of all Minorities, tell us a little bit about that organization.

Keypour Greenblatt: I started my activism just over eight years ago, when in Washington there was talk about a detente and diplomatic relationships with the Islamic republic. There was a level of enthusiasm and fascination by [former Iranian President Hassan Rouhani] being elected. And, you may recall the whole “charm offensive” language that was being thrown around, and people were of the belief that now we have a reformist in Iran, and therefore everything is going to be workable and therefore we should begin our so-called diplomatic relations with Iran in order to perhaps come to a nuclear agreement at the price of lifting sanctions from the regime. And at the time, because of my proximity to the White House and my access to several Iran roundtables, I was privy to certain so-called human rights activists who actually sat around the table and they believed that lifting of sanctions from repressive elements of the Islamic republic would actually help human rights in Iran, or even coming to a nuclear agreement with Islamic republic, a nuclear agreement that had nothing to do with human rights facts on the ground, would improve conditions of human rights in Iran. And I was very much against this perspective, and because I am a woman and because I am of the minority community and I had access and relationships with the Baha’is, the Sunnis, the Zoroastrians and other marginalized populations in the country, I saw all of these events in a different way, and I found it upon myself to have an alternative voice, present an alternative voice around the table. A voice that was not all for closing our eyes and putting our trust in a diplomatic movement towards Iran, but rather holding the regime accountable for their human rights violations, especially when it comes to women and minorities. And that’s why I started this organization, the Alliance for Rights of all Minorities, with a network of activists, inside and outside of the country, representing Iran’s religious and ethnic and gender minorities.

Bernstein: You’re the producer of an album featuring music of banned underground artists in Iran. How did that happen? Tell us about those artists.

Keypour Greenblatt: I’m a music junkie and an amateur musician myself, and it was always [on] my bucket list to do something beyond my own living room when it comes to music. And I had the opportunity to connect with musicians who use their music as a form of protest in Iran, and through a project called HOMANITY, together with a group of other artists, we were able to create a compilation musical album. And we featured music that was diverse in genre and at times politically combative against the Iranian regime, or simply just music that is about love and about freedom and about, you know, human beings being ordinary human beings far from hate and differences.

All of the songs that we featured in that album are practically illegal and banned from being played in the soundwaves of Iran. And we were able to bring these artists together, rappers, heavy metalists, rockers and others together to create an album, and I’m very proud of what we accomplished.

Bernstein: Tell us about your work with StopFemicideIran. What is femicide? What’s been going on in Iran? And what does the group do?

Keypour Greenblatt: So as we were documenting the repression of women and minorities in Iran, and monitoring both within Persian-language media on a day-to-day basis, but also communicating with folks on the ground about what is happening in Iran, we saw report after report of women and girls getting killed by male relatives, male friends, acquaintances, in the most gruesome and violent ways. And these reports were coming to us at such frequency and such gravity of crime scene that we could not ignore it anymore. And we made a decision with the team of Aram that we need to do something more fundamental about what is happening with respect to murders of girls and women in Iran.

At first we thought that these are probably just “honor-based” or so called “honor-based crimes,” — the crimes of passion, where a man feels that their daughter or wife or sister has been engaging in inappropriate behavior with a male person…So we started to track these murders and identify how they’re happening, where they’re happening, what is the excuse for the murder, and we saw that, no, it’s not just the honor that is the cause of these crimes, but rather men are killing women and girls because they can. Because going back to what I said in the beginning of this interview, women and girls are second-class citizens, their lives are not worth as much as a complete human being, and therefore there is no retribution when a crime has been committed against a woman or a girl.

I have seen stories of men, fathers killing their 10-year-old daughters, because she was playing the music too loud. Newlywed husband and wife deciding that, the husband decides that, you know, this wife of mine is not hygienic enough for me and I can’t tolerate being with her, and he just draws the weapon and kills her. Or in other circumstances, a man walks into the house and he is either high or he is angry or he has a lover and he wants to just give up his former family in order to marry a new woman, and comes in to their house in one murder scene, kills his wife and daughters at the same time in order to start a new life. So these things are happening, and it’s not just ‘honor-based,’ and this is why we are using the word “femicide,” because it is a catch-all term for [the] murder of women and girls for a variety of reasons just because the target is a female. And I’m very proud to say that even though we have absolutely no budget from anywhere, we have created the first ever map of femicides taking place in the country, and we are following this very closely, and we hope to be able to expand our work in the near future.

Favorite Persian food? “Two things, ghormeh sabzi and tah chin. Tah chin is like tahdig, but it’s even thicker and yummier. It’s really amazing. Crunchy on the outside, soft on the inside.” Favorite Farsi word or phrase? “‘Ghorbunet beram,’ which means ‘May I sacrifice myself for you,’ which is a term that parents and older people will say to their children. It’s like, ‘I love you,’ but because we’re intensely passionate we don’t just say ‘I love you,’ we say, ‘I love you so much, I would die for you.’ Ghorbunet beram.” Favorite place you would like to visit in Iran? “You’re gonna make me cry. You’re gonna make me cry. The parks. The parks. I have such great memories from the parks, and unfortunately, I’m literally choked up, there has been such a devastation of the environment in Iran — I hear about the trees dying and the environment just being polluted and miserable. But the parks of the 1970s in Iran, I would like to go back to those moments, and just the smell of the trees.”