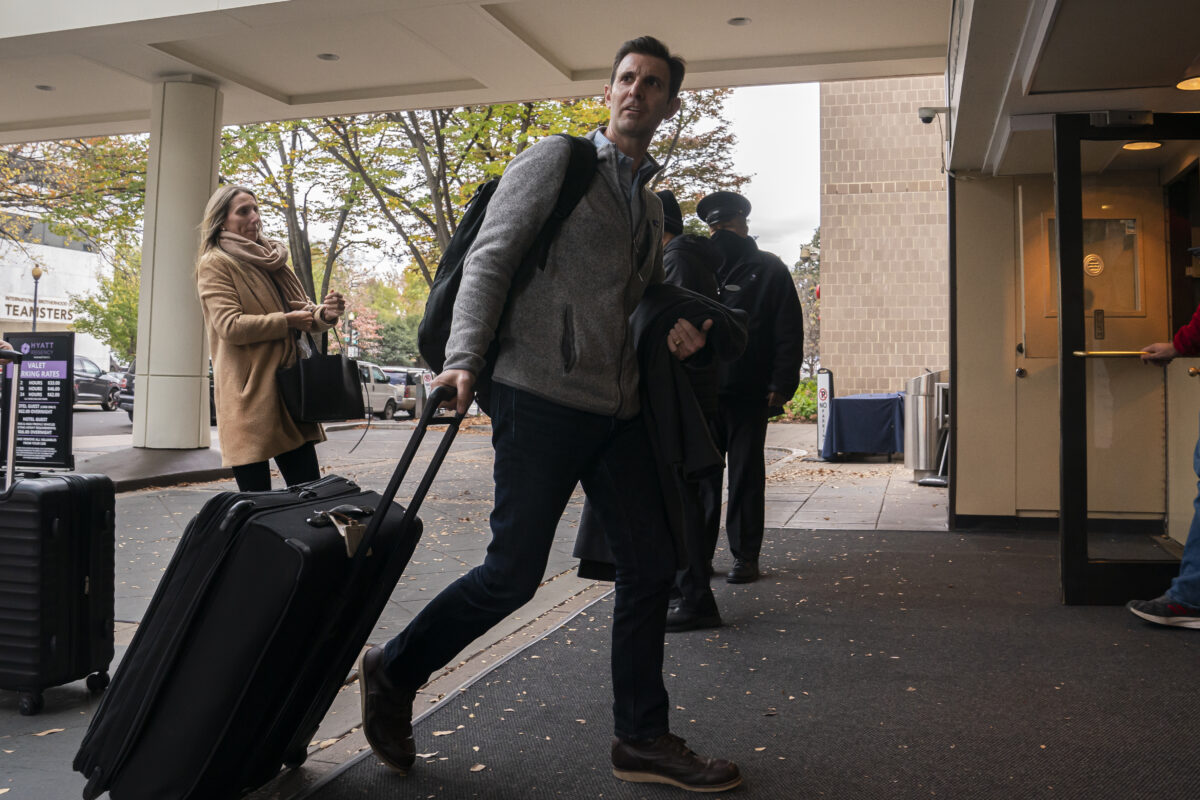 Rep.-elect Chris Deluzio of Pennsylvania arrives at the Hyatt Regency on November 13, 2022 in Washington, DC. Newly elected members of the House arrived in the capital today for orientation. (Photo by Nathan Howard/Getty Images)

For Chris Deluzio in blue-collar Western Pennsylvania, the key to the Democrat’s midterm victory was “standing up for the union way of life.” In Ohio, Democrat state Rep. Emilia Sykes banked on her roots in the Akron-area district. Anthony D’Esposito flipped a blue seat on Long Island by staying disciplined on the issues of crime and the cost of living. And Republican Marc Molinaro won an open seat in New York’s Hudson Valley by running against entrenched interests in Democrat-controlled Albany.

As the final results from the 2022 midterms continue to trickle in, candidates, strategists and other politicos continue to pore over the election results to suss out why Democrats largely overperformed and the expected red wave largely failed to materialize, outside of a few states. Speaking to Jewish Insider in the weeks following the election, four newly elected lawmakers from purple districts, two Democrats and two Republicans, broke down what they think tipped their races in their favor.

Pennsylvania Democrats overperformed in 2022 relative to the 2020 election, outpacing President Joe Biden in many areas of the state.

“We stuck to some messages that from the beginning were the things I was talking about,” said Deluzio, who won the district represented by Rep. Conor Lamb (D-PA), keeping it in Democratic hands. “No. 1 was economic, taking on not just corporate power but fighting to bring back our supply chains and manufacturing and standing up for the union way of life.”

Deluzio said he sees unions as critical to his victory and those of other Democrats across the Keystone State.

He added that his campaign “never strayed from our commitment to protecting reproductive freedom,” citing efforts to engage voters following the Supreme Court’s overturning in June of Roe v. Wade, and highlighted “threats to our democracy and some of those election deniers and others who were running in Pennsylvania and across the country. We were pretty direct about those threats.”

Democratic Ohio state Rep. Emilia Sykes, who won the Akron-area district represented by Rep. Tim Ryan (D-OH), argued that her history in elected office in the district helped push her over the edge.

“I am very well-versed in the community. [The district] has seen my leadership, has seen my work ethic, and has known me for a very long time,” Sykes said. “It was very apparent that folks across the district wanted someone who had a track record of success, of working across the aisle, who looked at this position as a servant job and truly wanted to deliver meaningful results for our community.”

Sykes ran against a campaign advisor on former President Donald Trump’s 2020 reelection campaign and conservative media personality, who won a crowded primary thanks in part to an endorsement from Trump. Candidates tied closely to Trump underperformed in competitive districts nationwide this cycle.

“My platform was one that was very clear about what my solutions were for those issues,” she said. “And people were at a point where this division, the hatred, the nonstop fighting is getting old.”

One of the few bright spots for Republicans was New York, where several flipped districts — the result of a new redistricting map drawn after a legal battle — helped the GOP win the House.

Anthony D’Esposito, a Hempstead town councilman and former police officer, and Marc Molinaro, the Dutchess County executive, offered some similar views on why they were able to resist national trends that ultimately favored Democrats.

“I think that a lot of it had to do with us sticking on message, I think the things that mattered most to the voters in the 4th Congressional District and across Long Island,” said D’Esposito, who flipped a Long Island District held by Rep. Kathleen Rice (D-NY).

He specifically mentioned the cost of living and crime as key issues.

D’Esposito said that he felt Republicans had been successful in New York and other states where these issues were top of mind, and “perhaps [in] the [states] that… we didn’t do as well in, other issues were of importance.”

D’Esposito also said that he had received “great support” from the Jewish community, which “without a doubt carried me over the finish line.” New York Republicans made significant efforts this cycle to appeal in particular to Orthodox Jewish voters.

Molinaro fell short in a special election this summer, but managed to pull through to victory in November, albeit under different district lines and facing a different opponent. Political pundits attributed his special election loss in large part to concerns about the overturning of Roe v. Wade.

Molinaro said he continued to double down on his message from the special election, focusing on cost of living and crime.

“And there’s no question that not everybody has those as their principal issue,” Molinaro said. “But overwhelmingly this part of New York, and I think most New Yorkers, acknowledge and are concerned about the high cost of living policies, the policies of Albany that have made us less safe and a real desire to just have government respect and function for them. That remained our message because it was what residents and voters wanted us to focus on.”

He also argued that turnout and the overall “dynamic” of the election were different between the August special election and the general election in November.

D’Esposito attributed Republican’s successes statewide to the climate in the state, as well as “great candidates” up and down the ballot, particularly gubernatorial candidate Rep. Lee Zeldin (R-NY), a sentiment that Molinaro echoed.

“He was a great candidate, he ran an exciting campaign, he really ignited the base and ignited a lot of people who were just tired of the one-party rule in New York and Washington,” D’Esposito said. “We saw it across Long Island in Nassau County and Suffolk County. I mean, the numbers are huge. And I think [Zeldin] had a lot to do with it.”

Looking ahead to the 2024 cycle, D’Esposito said that he believes the blueprint for Republicans to win in bluer districts includes “appealing to people on both sides of the aisle. You have to show the moderate Democrats and the independents, and, of course, the Republicans and conservatives, that you’re a hard worker, that the issues that matter to them are the ones that matter to you. And they want to see you, they want you to be present, they want you to be accessible.”

For Democrats, Deluzio said his election should serve as a reminder of the importance of unions to the Democratic coalition.

“I said it in my victory speech, I don’t think I’m standing here as the next member of Congress from the 17th District of Pennsylvania without labor with me,” Deluzio said. “I think that has to be such a key part of our constituencies as Democrats. And frankly, how we win in places like Western Pennsylvania is to be solid with labor fighting for workers’ rights, fighting for jobs.”

Sykes told JI that “the most important thing for any candidate or elected official to do is to listen to their communities, they will tell you exactly what they need and what they want from you.”

“So that would be my first suggestion,” she continued, “to truly listen to what people are saying, and understand the challenges that they’re having [and] put forth solutions that meet those goals, rather than any personal professional goals.”