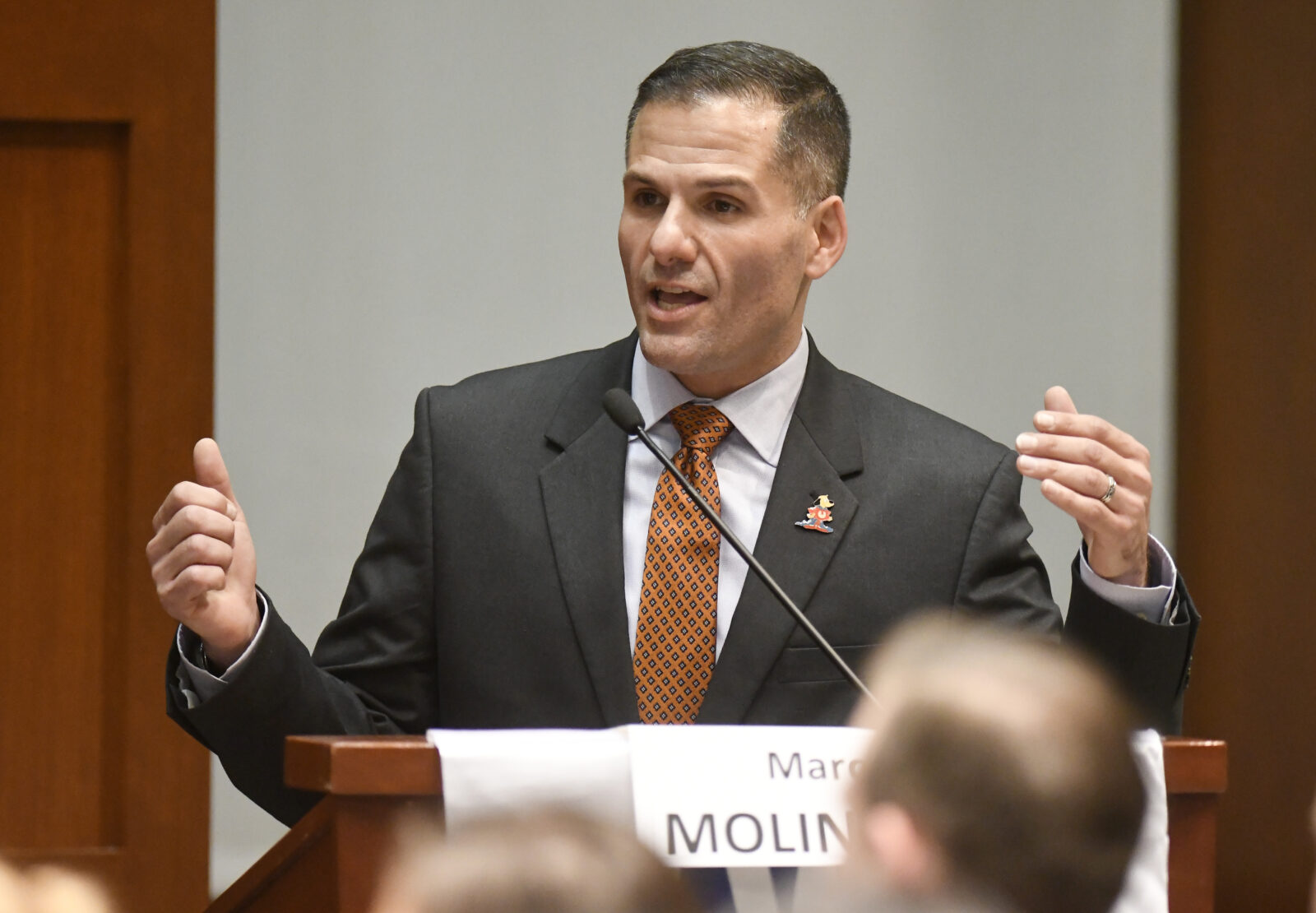 Molinaro looks for a second chance in a new NY-19, with a new opponent

Molinaro has shrugged off the loss and has trained his eyes on November, when he will again appear on the ballot — but against a different Democrat and in a newly drawn district, following the state’s redistricting earlier this year.

Speaking to Jewish Insider last week, Molinaro downplayed the implications of the special election results for the November election in the newly drawn 19th District, saying that his internal polls never showed him beating Ryan outright, and that Democratic turnout was higher due to competitive Democratic primaries in the area.

“All of that and redistricting created so much confusion that, frankly, we knew that turnout was going to be a difficult challenge,” Molinaro explained. “Elections are not about candidates. You can’t tell people what they should believe or what issues are important to them… We as candidates not only have to talk about those issues but be honest and earnest about listening to voters about those issues.”

While pundits have attributed Ryan’s victory to a significant degree to renewed national debates over abortion, which have energized the Democratic base and were a focus of Ryan’s campaign, it has not been the most prominent message employed by Democrat Josh Riley, an attorney whose resume boasts stints as general counsel to former Senator Al Franken (D-MN) on the Senate Judiciary Committee and as an appellate court clerk.

“Folks across upstate New York want more public servants and fewer professional politicians,” Riley told JI, when asked what lessons he’d taken away from Ryan’s victory. “The contrasts between me and my Republican opponent are pretty stark… I was born in this district, I was raised in this district… I have a career both in the private and the public sectors.” Riley is also a former aide to the late Hudson Valley Rep. Maurice Hinchey (D-NY).

Molinaro rose to prominence as the youngest elected mayor in the country in the mid-1990s after a successful run in the Dutchess County village of Tivoli. He served in the county legislature before mounting a successful bid for state Assembly in 2007, leaving in 2011 to serve on then-Gov. Cuomo’s Mandate Relief Redesign Team. Seven years later, he was the GOP’s gubernatorial nominee, but lost to Cuomo 60-36%.

Riley’s core campaign message — and the focus of his first general election ad, released Wednesday — centers around bringing manufacturing and industry back to upstate New York, with a focus on high tech and technologies critical to the renewable energy sector.

Following in the footsteps of some moderate Democrats on Capitol Hill, Riley raised concerns about President Joe Biden’s student debt cancellation plan, which he argued should have been more “narrowly tailored and focused.” Riley did not hesitate to criticize the administration on other areas where he thought it had misstepped. “There’s some things I think the administration has done well, and there’s some things I think they have not done well.”

Molinaro’s agenda includes bringing down the cost of living, bringing in jobs, creating economic growth and improving education, as well as improving public safety and quality of life, including homelessness, mental health and drug addiction.

Over the summer, Democratic ads tied Molinaro to the Supreme Court’s overturning of Roe v. Wade. Molinaro, who in the past has said that he considered the original ruling to be a settled issue, has more recently said that it’s a decision that should be left to individual states.

Riley and Molinaro did find some common ground on foreign policy — they both expressed opposition to a nuclear deal with Iran along the lines currently being negotiated.

Molinaro said he does not expect any positive outcome could come from negotiations with Tehran, calling for a “hard-line approach” involving the Islamic republic’s “economic, military and cultural isolation.” He also argued that Iran does not see the United States under the Biden administration as a serious threat.

Riley said he has “some pretty serious concerns with what I have seen so far,” calling for a “longer and broader and stronger” deal than the original 2015 agreement — a pursuit largely abandoned by the Biden administration. He called the current draft deal “shorter and weaker” and said he’s also concerned by Russia’s role in the negotiations.

Riley noted that he had been part of a legal team representing families of 9/11 victims that sued the Iranian regime, which he said gives him “a track record of holding Iran accountable for the instability and danger it is causing. So that’s the lens through which I look at the Iran deal.”

Both candidates also framed themselves as strong supporters of Israel.

Molinaro called the Jewish state “our strongest, most significant democratic ally in the world,” adding, “We must both respect Israel’s democracy, which means we don’t meddle in it.”

He said he supports a two-state solution, but was pessimistic about the prospects for it, arguing that there is no “honest broker” for a deal on the Palestinian side. If an honest broker does emerge, he continued, the U.S. should make clear it supports a negotiation, but not “at the expense of Israel.” Molinaro supports humanitarian assistance to the Palestinians, but said he is worried about ensuring it does not end up in the hands of bad actors.

Molinaro traveled to Israel in 2017 as part of a Dutchess County business exchange program with Israeli companies. He called it “one of the [most] inspiring trips, if not experiences, of my professional life,” both from a personal perspective as a Christian and as a “student of history and a government official.”

“Just awe-inspiring, overwhelming in a lot of ways, and touching,” he said.

Riley, who was endorsed on Wednesday by the Jewish Democratic Council of America, said that, “given everything we’re seeing in the world, I think it’s really important that we stand with democracies across the world, and especially democracies in historically unstable regions.”

He is supportive of a two-state solution, but said that it “is something that’s going to need to be accomplished through agreement among folks on the ground,” although there “may be a role” for the U.S. and other international partners to “facilitate conversations.”

Riley said that his experience working for the Senate Judiciary Committee has given him insight into the role that the federal government can play in fighting antisemitism. Congress, he said, can work to ensure proper oversight of and funding for the FBI and Justice Department’s efforts to fight attacks against the Jewish community.

“This isn’t just a policy issue,” he added. “This is a horrific thing we have been seeing across the country… We have had so many acts of unacceptable violence against our Jewish brothers and sisters, and it warrants a really strong response.”

Molinaro emphasized that leaders and law enforcement need to specifically call out and pursue antisemitism as a distinct issue and trend, rather than generalizing it as part of broader issues of hate, extremism and white supremacy. He also said that the U.S. is doing a “very poor job” of teaching young people about both religion and the Holocaust.

Orthodox Jews in the district, which includes the Catskills, parts of the mid-Hudson Valley and the Ithaca area, Molinaro continued, “know firsthand what it’s like to live under the judgment, if not direct antisemitism, of either government or neighbors. That has to be confronted in a real way.” He said that his county created a Human Rights Commission in response to the concerns of Jewish and other minority communities to support them and provide direct assistance.

“I think it’s valuable that we acknowledge and call it what it is, stand with those who feel personally attacked and then have the appropriate response moving forward… regardless of the population,” he said.

Andrew Mangini, an upstate New York political strategist who has previously worked for Republican officials, told JI he felt the special election race might not directly benefit either candidate, given the different district lines, but said it could be a “bellwether” for November.

“Riley will try to do a lot of the things that were successful for Pat Ryan, and Molinaro’s camp needs to figure out what didn’t work,” said Mangini, senior director of public affairs at The Martin Group. “What you’ll continue to see in his race is each candidate will try to tie the other back to a president. Riley will try to draw comparisons between Molinaro and Trump, and the Molinaro camp will try to talk about Biden’s high unfavorable poll numbers and also talk about the inflation that we seem unable to escape.”

Mangini added that both campaigns are likely “still probably working to develop exactly what their platform needs to be to win.”

He also predicted Molinaro will double down on “pocketbook issues” with a focus on pulling in swing voters and “softer” Democrats, while he expects Riley to follow Ryan’s “playbook.”

Jack O’Donnell, a political consultant and former staffer to Sen. Chuck Schumer (D-NY), described the special election results as part of a positive trend for Democrats on a number of levels, both statewide and nationally. ”Democratic energy is back,” he said.

“Whether that is sustainable over the next few months is really I think the biggest question,” O’Donnell continued, arguing that the election may come down to whether swing voters end up voting more based on economic factors or abortion. “I don’t think we can read too much into what happened in August.”