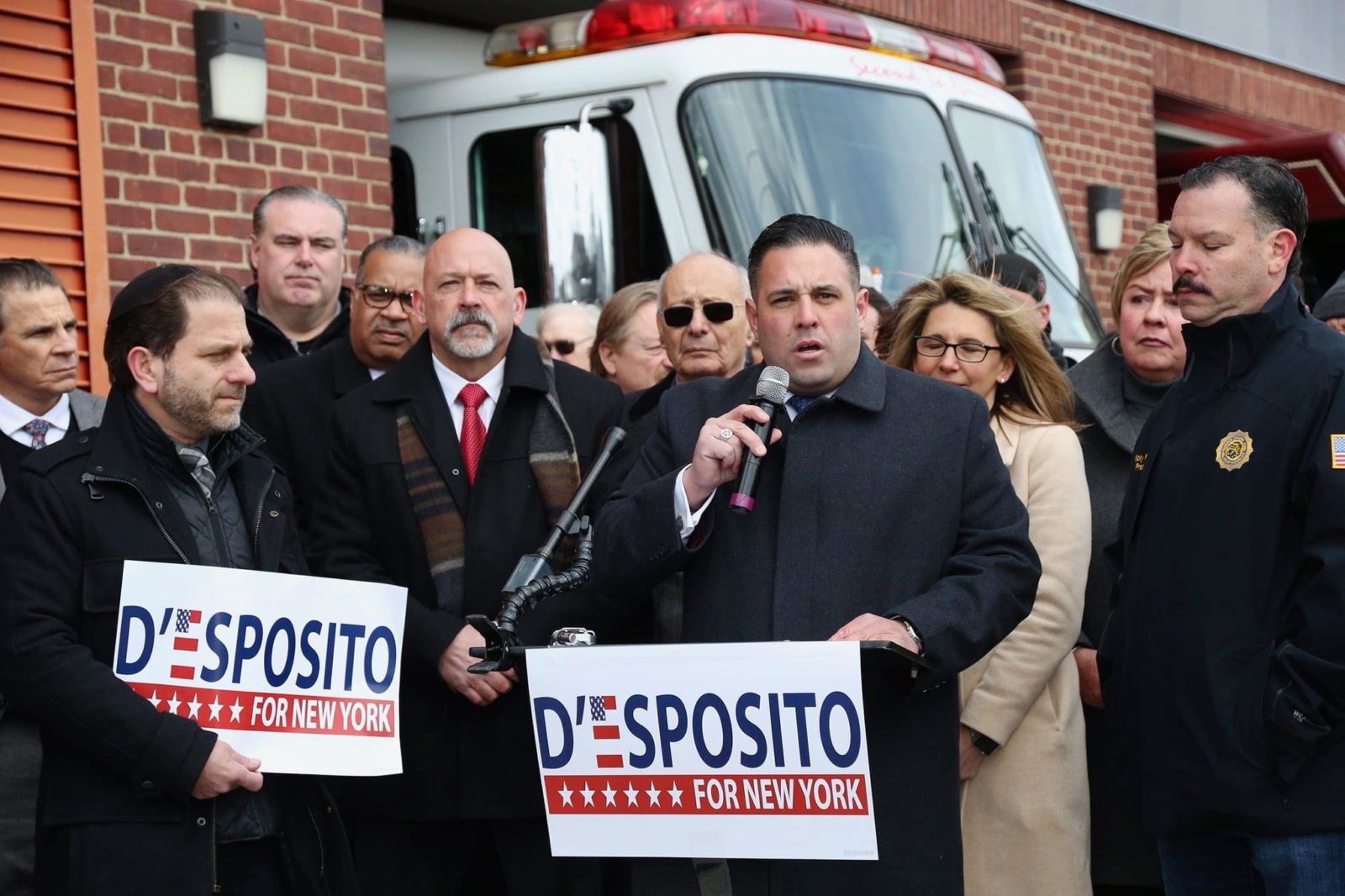 Nassau Republicans are all in on Anthony D’Esposito

D’Esposito told Jewish Insider last week that he’s running for Congress “because the country clearly needs a change” and people in the community feel “that our country and our state are on the wrong track… We really need some common sense in Washington.”

The town councilman said that he would seek to “treat government like a business and make sure that you protect the taxpayer at all costs,” which he said would be a continuation of his work on issues like cutting taxes in Hempstead. He characterized public safety as “a huge issue” — both locally and at the U.S. southern border — and decried rising gas and food prices.

“We need to stop and break the majority because Nancy Pelosi and the Democrats in Congress — they’ve been a rubber stamp for all these [Biden administration] programs and all of these policies that have failed the American people,” he said.

Bill Staniford, another GOP challenger who had been in the 4th Congressional District race for months and raised $255,000, dropped out soon after D’Esposito announced his bid and secured the party’s backing in April.

D’Esposito enters the race in a strong financial position: He told JI that he had around $230,000 in the bank, which he will be able to dedicate to the general election. Democratic former Hempstead Supervisor Laura Gillen, who leads the Democratic pack, had $217,000 on hand as of the end of the first quarter, some of which she’ll have to use to stave off other Democrats trailing her ahead of the primary, which was pushed to August amid a court battle over the state’s newly drawn congressional map.

A new map is expected to be finalized by the May 20 deadline given by the courts, but Nassau County Republicans had high hopes for flipping the district as originally drawn, with the heavily Orthodox Jewish Five Towns community — much of which D’Esposito currently represents as a town councilman — expected to form a key base of support.

An early March poll of 300 likely voters in the district conducted by McLaughlin & Associates for D’Esposito’s campaign found that he led Gillen on the head-to-head ballot, 48% to 36% with 16% undecided. The poll also found that a generic Republican leading a generic Democrat 55% to 33%, and showed President Joe Biden with a 53% disapproval rating in the district.

When Rice announced her retirement from Congress in February, Democratic strategist Jake Dilemani told JI that the district was “by no means a lock” for Democrats. Veteran New York Democratic strategist Hank Sheinkopf likewise speculated at the time that Rice may have retired because she was concerned about her electoral prospects in a year in which Republicans are expected to pick up seats.

Democrats also fell short in a recent local special election in a usually reliable part of the district. “If I were a Democrat running for Congress in the 4th Congressional [District], I would be very worried,” Democratic strategist Ross Wallenstein told JI at the time.

Despite his attacks on the administration and congressional Democrats, D’Esposito decried partisanship in Washington, saying his time on the Hempstead town board and in the New York Police Department gave him experience with working with people of varied backgrounds and political stripes.

“I sat in cars with guys and girls that I may have probably never met if it wasn’t for joining the police department… my life depended on them and their life depended on me,” he said of his colleagues in law enforcement. “And I learned better than most [people] get the opportunity to, how to compromise and work with those that were not the same as us to deliver real results. And that’s the exact same mentality I want to bring to Washington.”

D’Esposito demurred when asked whether he thought President Joe Biden was the rightful winner of the 2020 election, but acknowledged, “President Biden was sworn in, and he took an oath that he is the president of the United States… I may disagree with his policies but I think whenever a president is sworn in, whether we love them or dislike them, it’s a chance for us to root for them because we want success for America.”

D’Esposito boasted of strong relationships with the local Jewish community and a strong record on Israel, including opposition to the Boycott, Divestment and Sanctions (BDS) movement in local government.

“We were, if not the first, one of the first municipalities to draft anti-BDS laws,” he said.

When ice cream maker Ben & Jerry’s announced last year it was pulling out of what it referred to as “Occupied Palestinian Territory,” D’Esposito said the town board was “out front and center” and had “immediately” directed officials to stop doing business with parent company Unilever.

“We’ve certainly done our part for a township on Long Island to really fly the flag and let everyone know that we not only stand with Israel, but we’re willing to put the pen to paper and let everyone across the nation know it,” he said.

From a federal perspective, “the U.S. needs to make sure that there is always funding and that we provide anything and everything that we can to the State of Israel,” D’Esposito continued.

Foreign aid to the Palestinians “is important to maintain relationships,” he added, but should be reassessed annually “based on behavior and relationships and mutual respect.” He said he was not familiar enough with the specifics of the issue to say whether he supports a two-state solution.

Like most Republicans, the Hempstead councilman opposes returning to the 2015 nuclear deal with Iran, but said he would “absolutely” support a stronger agreement, although he had not thought through what he’d like to see in such an accord.

“I understand that the sanctions perhaps have not worked to the best that they [could] have, but I think strong sanctions and really crippling their economy is a smart way to encourage a stronger agreement,” he said.

D’Esposito said Hempstead’s government has worked “very hard” with the Five Towns to “help in any way we can” to secure places of worship and local yeshivas and also touted antisemitism education programs in the town.

He said he also works closely with the local police departments to ensure necessary security for Jewish institutions, as well as with a civilian public safety team that augments the police presence around Jewish institutions during the High Holy Days.

“In all facets of my district right now, I think really because of my background and being a New York City detective and a former chief of the fire department, when people think of safety or public safety or there’s a concern in a Town of Hempstead community, I am usually their first call,” he said.

Rabbi Zalman Wolowik of the Chabad of the Five Towns told JI D’Esposito’s law enforcement background has been helpful in providing honest assessments of the community’s security needs and vulnerabilities, and said he has worked with police and federal officials “trying everything in his power to make sure that our community is as secure as possible.”

“Anthony is a dear friend to everyone in the community,” Wolowik said. “I don’t know of anybody who does not like him. He’s a dedicated servant. He takes his job serious[ly]. He takes his responsibilities serious[ly].”

According to Rabbi Anchelle Perl, D’Esposito was, during his time as a New York City cop, responsible at one point for guarding the global Chabad headquarters in Brooklyn and recently helped coordinate an event commemorating the 120th anniversary of Lubavitcher Rebbe Menachem Schneerson’s birth.

To curb the spate of antisemitic incidents in the United States, D’Esposito said that the federal government needs to provide further funding for antisemitism education — delivered through law enforcement agencies and municipalities, in addition to schools; “do a better job” through the Department of Homeland Security to secure all places of worship; and consider prosecuting more antisemitic crimes at the federal level.

“When you send a message that we are taking a step forward to really protect these places of worship, it raises that awareness that people think, ‘Maybe this isn’t a crime that I want to commit,’” he said.

He compared his idea for federal prosecution to the “Trigger-Lock Program” in place in New York during his time as a detective, which transferred all weapons possession crimes from the state to the federal judicial system, where penalties are often stiffer.

“If we realize that people aren’t being charged on a state level and there’s an opportunity that someone who commits a heinous antisemitic attack is now being charged federally… I think that begins to send a real message that the United States and the federal government is standing against all acts of hate,” he said, adding that he’d support such a program for hate crimes of all types.

D’Esposito said the Nonprofit Security Grant Program, which provides DHS grants to nonprofits and houses of worship to improve their security, needs both additional funding and improved outreach to local leaders.

“If you walked into the Five Towns right now and just started going synagogue to synagogue and said, ‘Rabbi, do you know about this program?’ over half of them would say, ‘I have no idea what you’re talking about,’” he said.

The town councilman said he’s been working to spread that awareness, hosting one of the first events in Hempstead to spread awareness about the NSGP, and several since then. He said the town had also brought in town staff to explain the application process.

D’Esposito said he does not see antisemitism as originating from any particular political perspective, but exists “in all walks of life” and is not “geared to any one group.”

“I think it’s just people that unfortunately have some serious hate in their heart,” he said. “The fact that those numbers are so high is scary and there’s a real opportunity in every level of government to do our part to make sure that number drops dramatically over the next year.”

D’Esposito told JI he’s worked closely with the Jewish community on a range of issues, including starting a local program to distribute and train citizens to use Narcan — an emergency treatment to counter opioid overdoses — in response to a concern raised by Perl, a local Rabbi. The program has now trained almost 11,000 people, working in particular through local religious institutions.

Perl said that the councilman had taken a “personal interest” in the issue and “constantly is someone I can turn to.”

Rabbi Mordechai Kamenetzky, dean of the Yeshiva of the South Shore, said D’Esposito had been helpful with a range of projects like securing permits for building projects and putting up safety signs in local communities.

“He’s been a guy who’s been tremendously responsive to any requests that members of our Jewish community place,” Kamenentzky said. “He is a proven friend of the community.”