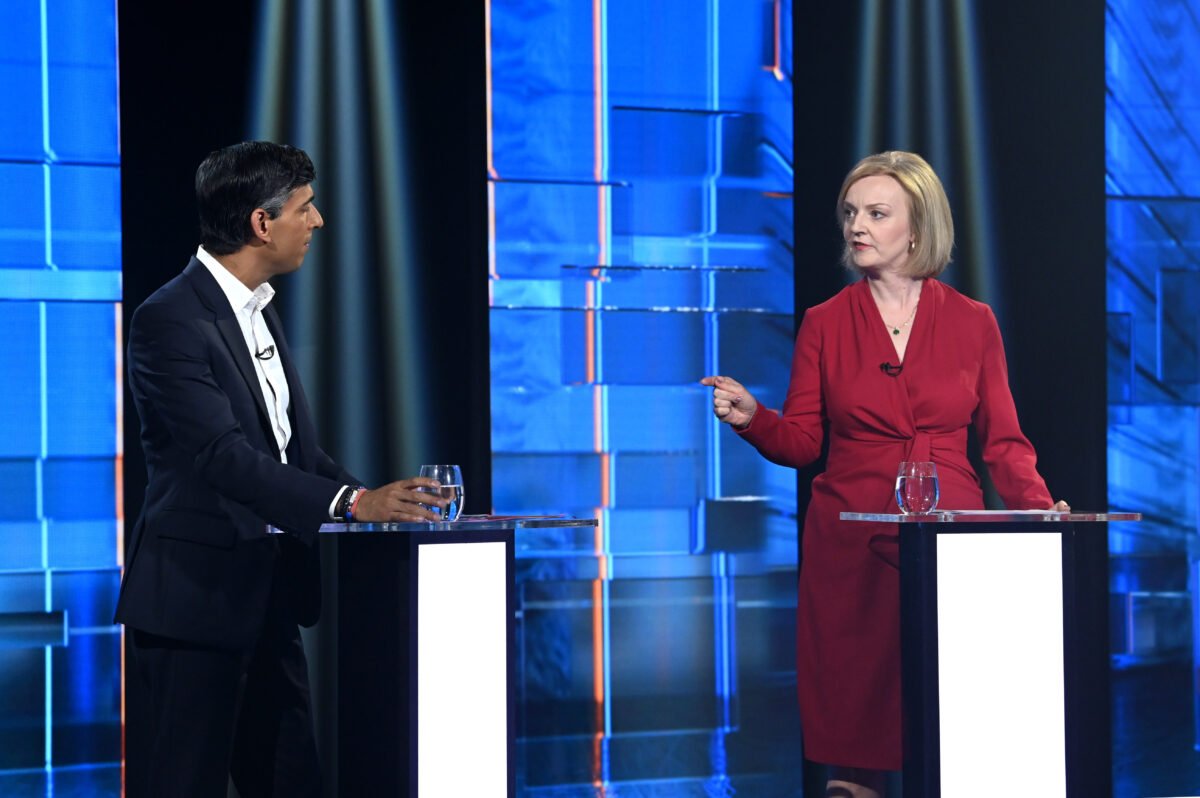 After three years of tumultuous politics during the scandal-laden administration of Boris Johnson, British politics will enter a new phase as the country’s Conservative Party selects Johnson’s successor.

Last week, the field was whittled down to two contenders after five rounds of voting open to members of Parliament. In the final round, set to be held over the coming weeks, dues-paying Tories will now decide who they will send to 10 Downing Street: former Chancellor of the Exchequer Rishi Sunak or current Foreign Secretary Liz Truss.

The race pits two Thatcherites and Johnson associates against one another, yet each claims a different economic plan and vision for the Conservative Party.

Sunak, 42, is a former hedge funder who, if elected, would become Britain’s first prime minister of color. Born to Indian immigrants from Kenya and present-day Tanzania, Sunak went on to the prestigious Winchester College and studied politics, philosophy and economics at Oxford. After a stint at Goldman Sachs as an analyst, he worked for various hedge funds before entering politics in 2015, embracing a long-held skepticism of the European Union that pushed him in 2016 to endorse Brexit.

In 2009, Sunak married Akshata Murthy, the daughter of Indian billionaire Narayana Murthy whom he met while pursuing an MBA at Stanford University under a Fulbright fellowship. The Murthy family’s wealth has helped propel their son-in-law’s political career, but Sunak has also been hurt by revelations that his wife has evaded paying millions of pounds of taxes by declaring herself to be a non-domicile status, a tax status that allows individuals born outside the U.K. or born to parents from outside the U.K. only pay taxes on their British income.

Less ideological than Truss, Sunak has a reputation as an effective political operative who shies from the social aspects of politics — he does not drink, despite British pub culture. He is also a practicing Hindu, and would become the country’s second non-Christian prime minister after Benjamin Disraeli, who was Jewish.

Truss, 46, grew up in a liberal family and also studied politics, philosophy and economics at Oxford. After working at Shell and Cable & Wireless, Truss entered politics, first working at the Reform Research Trust, a think tank, and then winning election to Parliament in 2010. In her college years, Truss identified with the Liberal Democrats, but has since drifted to the right. Initially an opponent of Brexit, Truss now supports the 2016 decision that pulled Britain out of the European Union.

Truss, who played Margaret Thatcher in a school play as a 9-year-old girl, is the race’s more experienced candidate and favorite to win. She has served various positions in the Cabinet including as environment secretary, justice secretary, chief secretary to the treasury (a position also briefly held by Sunak before he became chancellor of the Exchequer), international trade secretary and then finally foreign secretary.

In her role as international trade secretary, Truss was a key player introducing the controversial Northern Ireland Protocol, which requires goods inspections to occur at the border of Northern Ireland and Great Britain.

In March, she secured the release of Nazanin Zaghari-Ratcliffe and Anoosheh Ashoori, British-Iranian citizens who were being held hostage in Iran, by resolving a decades-old $480 million debt with Tehran. She also supported the decision to designate Hamas as a terrorist organization.

Despite their political differences, both candidates have expressed support for Israel and have relationships with the U.K.’s Jewish community.

Justin Cohen, the news editor at U.K.’s Jewish News, told Jewish Insider that both candidates are friendly to Israel and the British Jewish community, but that Sunak’s positions are less well-known because he is newer to politics.

“I would expect literally any member of the current government, or the pre-Johnson resignation government, to be a very strong supporter of Israel,” he said.

Cohen described Sunak as a “lesser-known quantity when it comes to the community,” and added that “there’s no doubt that for the staunchest supporters of Israel who want to know exactly where things are going, then the current foreign secretary, who is a big supporter, the safest bet is there.”

In a 2019 parliamentary speech, Sunak said, “It is only right that we celebrate the great achievements of the Jewish community, whose contributions have truly shaped our nation’s journey and identity,” later adding, “that positive, collaborative social action is underpinned and inspired by the Jewish values of kindness, justice and shared responsibility.”

Both candidates reiterated their support for Israel and the Jewish community in op-eds published by the Jewish News last week.

“I will double down in my determination to stamp out antisemitism and hate around the world,” Sunak wrote.

He also expressed his hope to deepen economic and security ties between the U.K. and Israel and committed to “work towards” a free-trade agreement between the two countries.

Whether it is a sense of hard work, fairness or belief in family values, the Conservative Party should be the natural home for the British Jewish community.”

She also promised to tamp down on antisemitism, and said she called out the Colleyville, Texas synagogue shooting.

At one point in the piece, she referred to Israeli Prime Minister Yair Lapid by his first name, writing, “I am looking forward to working closer with my friend Yair as Prime Minister.”

Truss has been vocal on Twitter in denouncing antisemitism, tweeting this January, “We will stand up to the scourge of antisemitism and prejudice in all forms.”

Both candidates have met with Israeli officials to discuss a free-trade agreement between the countries. In March, Sunak met his counterpart, Israeli Finance Minister Avigdor Lieberman. Truss met with Israeli Ambassador to the U.K. Tzipi Hotovely last year.

Both Sunak and Truss endorsed a controversial Johnson administration plan to deport migrants to Rwanda, a stance unpopular among some in the U.K.’s Jewish community.

Roughly 160,000 Brits are eligible to vote, and the campaign will probably center on the two candidates’ economic stances. Truss is criticizing Sunak for causing a recession by hiking taxes, and has promised to lower the country’s tax rates. Sunak is also in favor of cutting taxes, but insists the country wait until inflation abates, warning that premature tax cuts could exacerbate rising prices.

The Tory party does not publish its voter roles, so it is impossible to discern the exact number of Jews who will have the opportunity to cast their ballots in the race, however Cohen noted that British Jews are “probably more politically engaged than your average person” and that they are “more likely to vote Tory than they are to vote Labour,” suggesting that the Jewish voice — albeit small — might be somewhat disproportionate in the race.

The winner of the election will be announced in September.