For the first time, the White House Seder will be open to both the public and the press 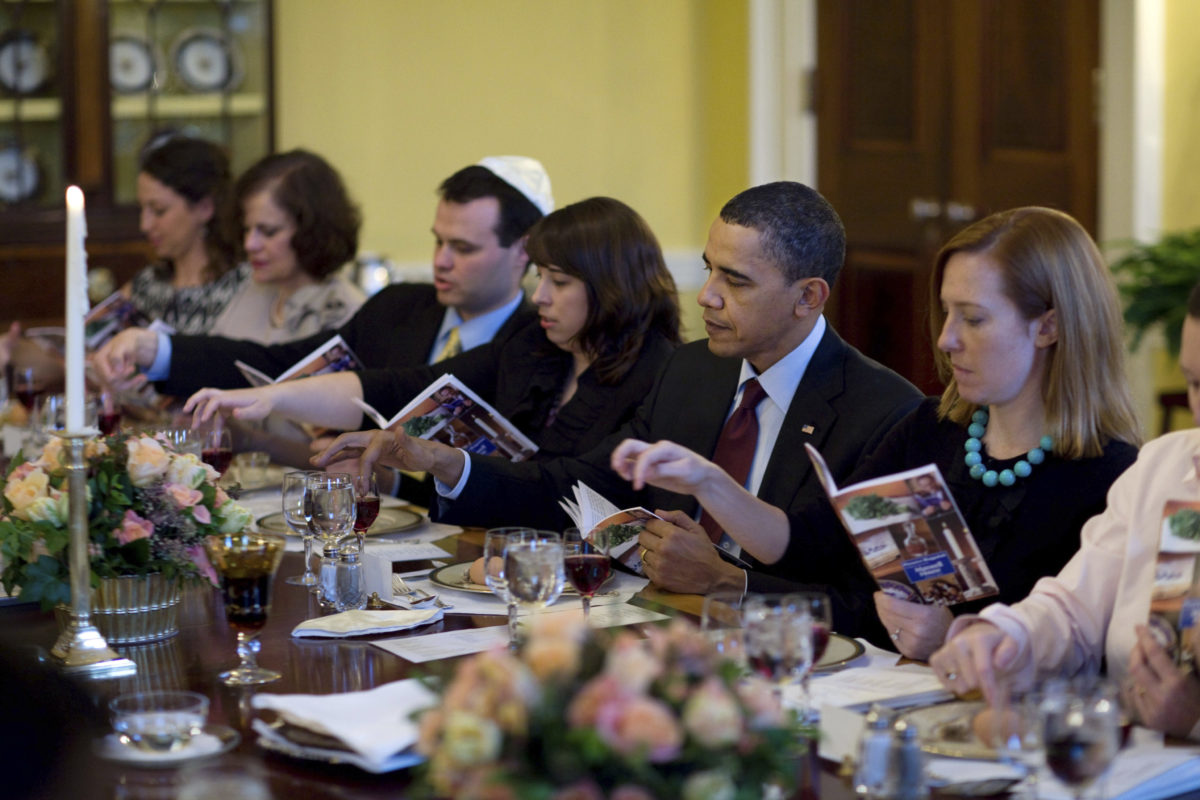 In this image released by the White House, President Barack Obama and the first family mark the beginning of the Jewish holiday Passover with a Seder with friends and staff in the Old Family Dining Room of the White House in Washington, on Monday, March 29, 2010.

When it comes to Passover at the White House, former President Barack Obama set a high bar for future administrations as the first president in American history to host a Seder back in 2009 — a tradition he observed annually during his time in office. The ritual was personal for the former president, originating from a campaign stop in Harrisburg, Pa., where Obama sat down with three Jewish staffers for a makeshift Seder in the basement of a Sheraton hotel.

Former President Donald Trump was comparatively less engaged with the annual holiday. The White House hosted Seders in the first two years of his presidency; Trump did not attend either of them.

This year, the Biden administration is opting for a more accessible approach than either of his two immediate predecessors. On Thursday evening, the White House will host and broadcast a virtual Passover celebration featuring live remarks from the second gentleman, Doug Emhoff, who is Jewish, as well as reflections from other top White House officials, according to a spokesperson. Vice President Kamala Harris is also expected to join the event. Sharon Brous, senior rabbi at IKAR, a non-denominational synagogue in Los Angeles, will emcee.

“My focus is on lifting up the very essence of the story of yetziat mitzrayim, the exodus from Egypt,” Brous told Jewish Insider in an interview on Wednesday evening, noting that the holiday’s themes carry added significance during the pandemic. “In particular, for thinking together about what the message of the trajectory from enslavement to liberation, from darkness to light, from degradation to dignity, from narrowness to expansiveness, has to teach us in this time of so much grief and loss and isolation.”

Brous said the White House asked her to lead the event about 10 days ago. “My reaction was that I wished we were doing this in person,” she said. “I know that it was meaningful for the Biden-Harris administration to do this, and so I hope we’ll be able to do it in person at some time in the future.”

The hour-long Zoom event, scheduled to begin at 5 p.m., is open to the public and the press — making it the first White House Passover event of its kind. Technically, it isn’t a Seder because it takes place two days before Passover’s official start, though the celebration is in keeping with the manner in which many Jews have observed the holiday since the pandemic began.

“This is the second year in a row that families around the country are going to be celebrating Passover on Zoom,” said Matt Nosanchuk, president of the New York Jewish Agenda and a former White House Jewish liaison who participated in one of Obama’s Seders.

With that reality in mind, the Biden administration’s decision to recognize the holiday in an online gathering, open to all who are interested, represents a significant gesture, Nosanchuk told JI. “For them to bring the Jewish community to celebrate Passover with the second gentleman,” he said, “is a tremendous opportunity to forge some connection.”

“It’s definitely different,” said presidential historian Tevi Troy, who contemplated organizing a White House Seder during his time as a Jewish liaison in the Bush administration but didn’t pursue it because the logistics were too challenging. “The Jewish world is recognizing the benefits of Zoom and virtual events, and I think this is playing off of that,” he added. “It’s nice to have these acknowledgements of the Jewish presence in America.”

Noam Neusner, who also served as a White House speechwriter and Jewish liaison under Bush, agreed with that assessment. “It’s always good when the Jewish community is authentically represented and recognized at the highest levels of the U.S. government,” he said. “It’s affirming. It reminds people that Jewish people came to this country and thrived here. So this kind of recognition is kind of long in the making, and it’s nice to see it.”

Still, Neusner said it would be unfortunate if the event were politicized. “The one thing I would caution against would be to make the event explicitly political, even though a significant majority of Jewish voters supported the election of the Biden-Harris administration,” he told JI. “Judaism does not require political alliances.”

But Karen Adler, a former Biden aide and senior vice president of the Adler Group, suggested that wouldn’t be an issue. “It’s both particular and universalist,” she said of Passover, “and so I think a White House Passover event like this covers the waterfront, if you might, of who we are as a very, very diverse Jewish community, both those who supported President Biden and Vice President Harris, and those who didn’t. We all share in the Passover holiday.”

While President Joe Biden is slated to kick off the event with a prerecorded message from himself and First Lady Jill Biden, he appears to have no plans for a private Seder of the kind hosted by Obama. Biden did not participate in those Seders, which were intimate affairs, but at least two high-level staffers now in his administration — Jen Psaki, the White House press secretary, and Herbie Ziskend, deputy communications director to Harris — attended every year.

Eric Lesser, a Massachusetts state senator and former Obama aide who helped kickstart the Passover tradition in Harrisburg, also never missed a Seder at the White House between 2009 and 2016. “I think back very fondly to the eight Seders that President Obama hosted,” he said. But he seemed equally excited to join the Biden administration’s virtual Passover event on Thursday evening. “It’s just great to see a continued focus on it,” Lesser said. “I’ve got it on my calendar, so I’m ready to go.”

Such are the advantages of celebrating Passover on Zoom. “Doing it virtually actually does give us the opportunity to stream it live, so there will be many thousands of people who will be able to participate in the celebration this year,” said Brous, the IKAR rabbi who is leading the event. “That’s a bit of a pandemic silver lining for us.”