Gelman, the former chief executive of the Wing, commissioned a small but meticulously curated selection of Hanukkah items to accompany the Christmas offerings now on sale 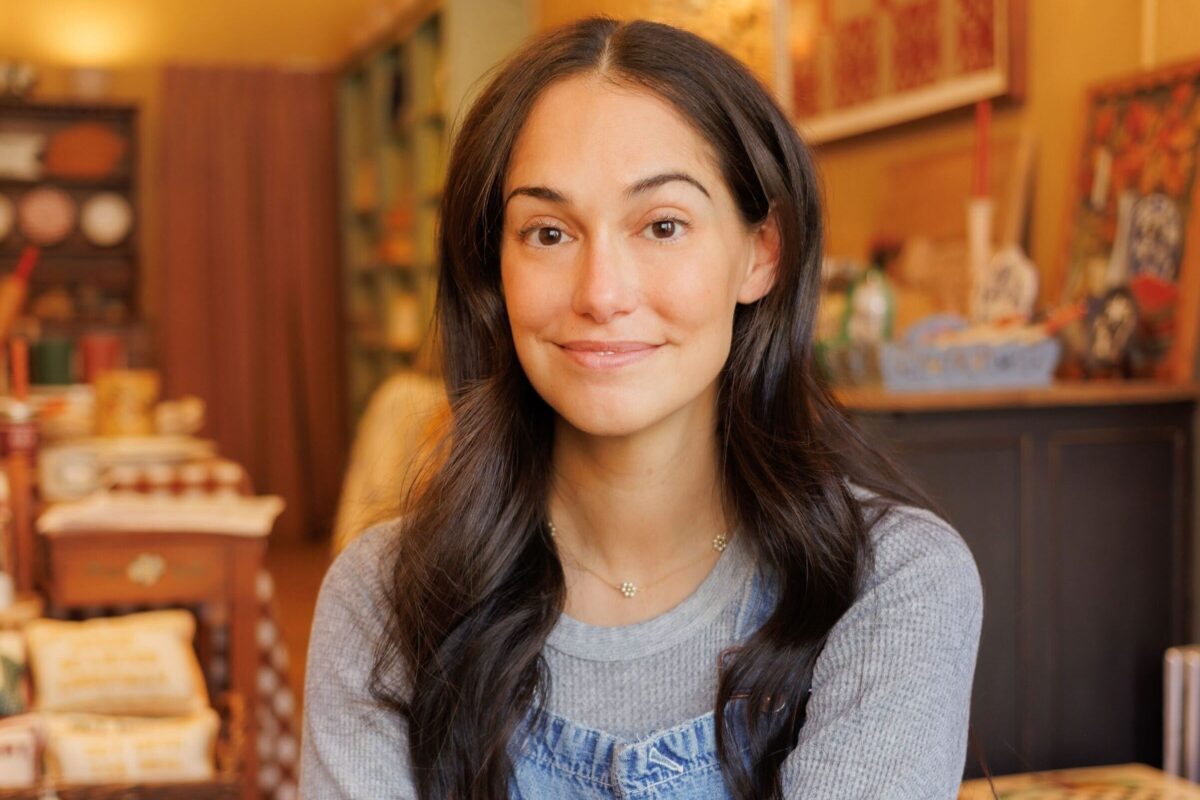 On a recent gloomy morning in brownstone Brooklyn, Audrey Gelman, the former chief executive of the women’s co-working space, the Wing, was snugly ensconced in her country-inspired homewares store, the Six Bells, where a festive assortment of holiday trappings made for a welcome distraction from the imminent prospect of mid-December rain.

The shop, which opened eight months ago in Cobble Hill, had undergone an intensive Christmas-themed makeover for its first holiday season, replete with dark-red ribbons, coniferous garlands, cheerful stockings, glistening silver bells and a sumptuously appointed Christmas tree, among other things.

“We really doubled down on the holiday stuff,” Gelman, 35, told Jewish Insider last Thursday before opening hours, sitting at a large wooden desk near the back of the store.

The yuletide decor was in keeping with the Six Bell’s bucolic atmosphere, even if Gelman, who described the revamp as a “jewess’ lifelong dream” in a tongue-in-cheek Instagram post last month, doesn’t celebrate Christmas herself — and never had a tree growing up. “No way,” she said, dismissing the idea as preposterous. “My dad’s a cantor.”

In a heimish nod to her Jewish roots, Gelman commissioned a small but meticulously curated selection of Hanukkah items to accompany the Christmas offerings now on sale, including hand-painted ivory taper candles, hand-decorated gingerbread cookies shaped like the Star of David and a blue-and-white porcelain menorah sourced from the English pottery company Spode, which maintains a Judaica collection.

For Gelman, it was particularly gratifying that the menorah had been among the shop’s “best-selling holiday items,” she said. “We cast a wide net trying to find different gifts and Judaica that felt like it fit in with the rest of the aesthetic of the store,” she explained. “There’s obviously a lot of Christmas stuff, which is really, really fun. But people have definitely been buying the Judaica, too.”

“I think we’re going to double down on Hanukkah next year,” Gelman suggested. “I’m excited for that.”

The Jewish festival of lights, which commenced on Sunday evening, has always been a “really big deal” for Gelman. “Latke-making was just an awesome kind of conveyor belt, like every member of my family doing something different,” she said. “It’s been fun to introduce my son, so far, to making latkes and sufganiyot and the traditional part of it that’s so important, I think, to family.”

Gelman, who lives in Brooklyn with her husband, Ilan Zechory, a co-founder of the music annotation site Genius, and two children, was raised in a religious household on the Upper West Side, and regularly went to synagogue on Fridays and Saturdays. “As a toddler,” she recalled, “I would sit on the bima with my dad when he was doing services.”

“He has a really beautiful voice,” she said of her father, Irwin Gelman, who served as a cantor at the Conservative Synagogue of Fifth Avenue in Greenwich Village. He now serves at Congregation Beth Abraham in Buffalo.

Would she ever consider playing cantorial music in the Six Bells?

On a more serious note, Gelman said she has long been motivated by a personal commitment to Jewish representation as the granddaughter of Holocaust survivors on her father’s side. “It’s really important to me,” she said. “That’s a big part of my Jewish identity.”

Had that impulse influenced Gelman throughout her career?

“That’s a good question. I mean, I worked for Jewish elected officials and I worked in politics in New York,” she mused, alluding to her previous role as a widely respected publicist for Democratic politicians such as Scott Stringer, the former city comptroller. During her time leading the Wing, the now-shuttered women’s coworking behemoth Gelman co-founded six years ago in New York, “we celebrated Jewish holidays in a sort of communal way,” she added.

In June 2020, Gelman resigned from the Wing amid accusations that the company had mistreated employees of color, saying her decision was “the right thing for the business and the best way to bring the Wing along into a long overdue era of change.”

It was an especially jarring reversal of fortune for Gelman, an ambitious young executive who, before her abrupt departure, had been heralded as an embodiment of female empowerment. The Wing, which ceased operations this past August, had more than 10,000 members and established outposts across the country and internationally, while raising more than $100 million in venture capital investments.

But with the drama now more than two years behind her, Gelman acknowledged that she has been enjoying a “different pace” in her new position. “Scale is really intense, and massive growth of a company is its own experience,” she said, casually dressed for the interview in a patterned wool sweater, blue jeans and leather boots. “It’s been really, really nice to embrace a sort of a slower, more thoughtful approach to growing a company but also get to be really creative.”

Gelman has leaned into her enthusiasm for antiquing since she opened Six Bells, which takes its name from an English pub in South Oxfordshire of personal significance to the newly minted shopkeeper. “Definitely the hunt is really, really fun, and there’s all sorts of funny antique mantras, like ‘the bigger the pile, the bigger the smile,’” she said with amusement. “I feel very connected to everything in the store because we’ve either found the brands, or some of it I’ve just bought myself.”

When JI visited late Thursday morning, Gelman was eager to highlight an antique menorah, which was on display among the candles and cookies. Was it a limited edition? “Very limited,” she said with a laugh. “One of one.”

It is too soon to say if the business is profitable, Gelman told JI, because it has been open for less than a year. “It’s doing really, really well and certainly exceeding our expectations,” she allowed.

While Gelman had assumed that most orders would come from New York and Los Angeles, she was pleasantly surprised to be proven wrong, she said. Roughly 60% of the store’s online customers have come from outside those states, including far-flung locales such as the Midwest as well as Alabama and Tennessee, according to Gelman.

Still, Gelman said she feels no “immediate rush to grow, grow, grow,” even as she is now in the early stages of exploring the possibility of establishing Six Bells offshoots, which she would only characterize as “store-based and not store-based.”

“The thing I’m excited about with it is, I love growing companies, and so this is no different,” Gelman said. “But it’s just a very different approach.”

One way the shop itself differs from others is its playful focus on a fictional parish of undetermined vintage called Barrow’s Green, which Gelman invented as the imaginary inspiration for the Six Bells’ rustic offerings. The small village is populated by an eccentric group of archetypal townspeople, who are depicted in a cluster of oil paintings that hang from a wall in the store.

Culled from Gelman’s personal art collection, the pictures portray, among others, a “town gossip,” a “mystery writer,” a “parlor maid” and a bespectacled rabbi, Haskel Frumkin, whose black skullcap, long white beard and slight scowl suggest an air of bemused authority.

“I definitely wanted him to have a place in all of this,” Gelman said of the rabbi. “He’s just got a vibe.”

What was his backstory?

“The idea around him is he struggles to get a minyan but manages to do it,” she explained, referring to the quorum of 10 Jewish adults required for prayer services. “He’s very focused on restoring this old synagogue that has fallen into disrepair in the village and creating sort of a vibrant congregation there.”

Did Gelman envision the village — featured in an interactive guide on the Six Bells’ website — as a kind of shtetl?

“That’s the thing,” she replied. “It’s like, shtetl means little town, and obviously, Jews have always historically been very comfortable in small villages. I wanted to create the idea that there was a rich Jewish life in the village.”

So how many Jews live in Barrow’s Green?

“I’d have to look up the exact number of families that belong to the synagogue,” she told JI, without breaking character as the town’s unofficial historian. “We never have an exact date, and it’s supposed to live in a time that is open to interpretation and also a specific place. But it’s obviously many, many, many decades ago, more than a half-century ago, and you probably wouldn’t find many Jews in a village like that.”

In a seemingly cruel twist, the rabbi is placed on a wall overlooking the Christmas tree, a squat but voluminous spruce festooned with silver tinsel and assorted holiday baubles, including hand-blown egg ornaments that Gelman discovered on a trip to Austria this summer, just before the birth of her daughter. “I got to go to the Holocaust museum there and see a lot of Jewish history,” she recalled. “And also found Christmas ornaments.”

The rabbi, it turns out, is a fan of the ornaments as well, at least according to an “interdenominational” village gift guide published in a fake newspaper, The Green Evening Chronicle — printed versions of which are available at the Six Bells.

“He does a lot of interdenominational services with the local vicar, so I think he is very interested in building a community that mixes both Christianity and Judaism in the village,” Gelman said, before concluding: “This is all obviously completely fictional.”

But for Gelman, such diversions are no doubt part of the appeal. “The world is crazy,” she said softly, looking out over her compact domain from behind a pair of tortoise-shell glasses. “It’s very relaxing and sweet in here.”