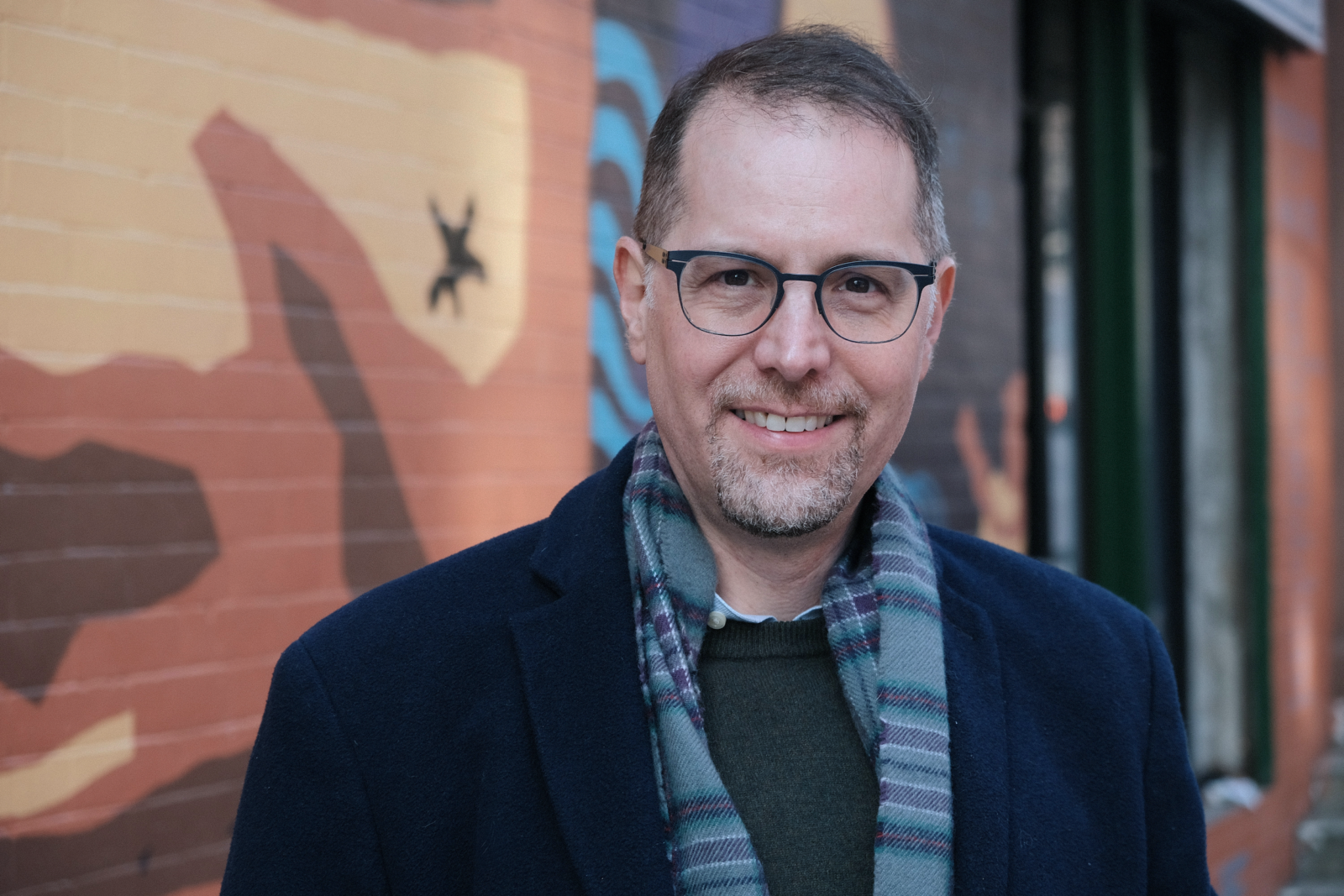 Before the pandemic, Mark Levine, a Democratic New York City councilmember who represents Upper Manhattan, was widely viewed as an ambitious lawmaker with a strong progressive bent. Beginning in 2014, his first year in office, Levine helped revitalize the council’s Jewish caucus into an activist vessel focused on matters impacting the Jewish community and beyond, while sponsoring historic legislation guaranteeing free legal representation for low-income tenants facing eviction.

But over the past year, Levine’s profile has risen dramatically as he has become one of New York’s most trusted public health resources on all matters COVID-19 — an unlikely role for the councilmember, who chairs the city’s health committee but has no experience in medicine. When the pandemic tore through New York last March, however, Levine emerged as an early, outspoken and sobering voice of reason, urging caution, championing science and, when appropriate, dispensing nuggets of restrained optimism from his widely followed Twitter feed — earning praise from one colleague as “the Anthony Fauci of the New York City Council.”

As the vaccine rollout continues apace, Levine’s social media presence has transformed into a veritable catalogue of available appointments as he seeks to ensure that residents across communities — particularly those that are underserved — schedule a time to get the shot. 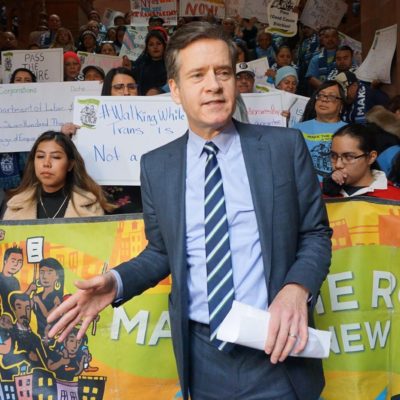 Brad Hoylman sets his sights on the Manhattan borough presidency

“His platform has become one of the most important to follow for up-to-date information around vaccine access,” said Dara Kass, an associate clinical professor of emergency medicine at Columbia University Medical Center, lauding the councilmember’s steadfast effort to publicize city resources while advocating for real-time change when certain approaches proved ineffective. “I have seen him absolutely shine as a leader through this pandemic.”

David Greenfield, the Met Council CEO who worked closely with Levine during his time as a city councilmember from 2010 to 2017, said his former colleague “has attracted a citywide following” thanks to his work during the pandemic. “That has made him tremendously popular even outside of Manhattan.”

That reputation will no doubt serve Levine well as he now competes in the Democratic primary for Manhattan borough president, which will be held on June 22. While there is no public polling on the race, Levine is one of the most recognizable candidates in a crowded field that includes fellow Councilmember Ben Kallos, New York State Senator Brad Hoylman and former congressional candidate Lindsey Boylan.

“I’m going to be a public health warrior for the rest of my life,” Levine said in a recent interview with Jewish Insider. “As borough president, I will fight really hard for a full and just recovery from this pandemic.”

The 51-year-old councilmember announced his candidacy in January of 2020, just before the first confirmed coronavirus case was documented in New York, and has since raked in endorsements from a number of prominent city figures, including City Comptroller Scott Stringer, who is now running for mayor, Rep. Adriano Espaillat (D-NY), former Rep. Charles Rangel (D-NY) and former City Council speaker Melissa Mark-Viverito.

Though Levine was initially somewhat cavalier about the emerging pandemic, denouncing COVID-19 “fear mongering” in an early-February Twitter message featuring photos of an appearance at the crowded Lunar New Year Parade in Chinatown, his rhetoric shifted significantly when he and his wife, Ivelisse Suarez, contracted the virus. “It undoubtedly makes it more real and gives me authority to say that this is anything but just like the flu,” he said. “I see my role, as standing up for science, for equity, for compassion.”

As he takes stock of the pandemic, which has claimed tens of thousands of lives and shuttered untold numbers of small businesses in New York, Levine sees an opportunity in the wake of such devastation to advance sweeping change. Recovery, he argues, will need to address the glaring inequalities laid bare by the virus. He calls for “unprecedented investment” in universal healthcare as well as an expansion of the city’s parks system and renewed investment in mom-and-pop stores and the arts. “I’m running for borough president to take on the fight for our comeback,” he said.

Whether he will be in a position to enact such priorities as Manhattan borough president, a role that is largely viewed as ceremonial, depends on how effectively he can wield the limited number of responsibilities that fall under his purview. Levine, for his part, believes he’s up to the task. “I think the office is incredibly important, now more than ever, to lay out a bold agenda for this borough, and to use the many levers of the office to enact it,” he said, citing his ability to introduce legislation, appoint community board members and make recommendations around zoning, land use and preservation.

“What it really all adds up to is a very powerful platform for organizing, and this is how I’ve led in the council,” Levine asserted. “As one member in a body of 51, I don’t have absolute power, but we enacted right to counsel for tenants, really historic legislation, because I led a three-year organizing campaign. I think that my record as chair of the Jewish caucus proves that I can take on a role that has been seen as ceremonial and use it to organize for impact.”

Greenfield backed up that view. “I would say that he has tremendously impressive organizing skills,” the Met Council CEO said of Levine. “He really has a unique ability to bring people together, and his reign as the chair of the Jewish caucus was a very inclusive one where everybody, regardless of their background, felt welcome.”

Throughout his four years leading the caucus, Levine worked to address Jewish poverty, foster intergroup relations with other minority communities and raise awareness around antisemitism, which he personally experienced during his campaigns for City Council in 2013 and 2017. He also visited Israel on a delegation of council members. “We came under attack for that,” Levine recalled. “There’s a real double standard. There’s been delegation trips to Russia and Turkey and China that led to not a peep of protest. But our trip to Israel certainly, unfortunately, did.”

Over the summer, Levine spoke out against a questionnaire distributed by the New York City chapter of the Democratic Socialists of America asking that local candidates pledge not to visit Israel if elected. “I think it would be absurd to say that I couldn’t travel to visit my cousins,” said Levine, who has family in Israel and is fluent in Hebrew. He began learning the language in his 20s after visiting the Jewish state a number of times, and views it as “a central part” of his Jewish identity.

Yiddish is on his to-do-list. “I wish I knew more,” he told JI. “The pandemic disrupted it.” Still, Levine said he has been working with a group of activist parents to create a dual-language Yiddish public school program as part of what he describes as his passion for dual-language education. “I fight hard for government communication to be more available in Yiddish,” Levine said, charging that the city’s failure to develop strong ties with Orthodox communities in New York “really hampered the public health effort” during the pandemic.

The Orthodox community has been “scapegoated in often ugly, vicious terms” throughout the course of the virus, Levine said. “I remember last March being asked by a reporter whether I thought there was something unique about Jewish ritual that makes us more vulnerable to the coronavirus,” he added. “So I’ve been outspoken about both the need for the city to be better about building ties to the community and pushing back against the kind of vicious scapegoating that has been an unfortunate feature of the last year.”

The Chicago-born politician, who grew up in Maryland, lives in Washington Heights with his wife and two sons, and attends Hebrew Tabernacle Congregation, a Reform synagogue. He first ran for City Council in 2001 and was long active in local Democratic politics before he assumed office seven years ago. “A phrase which motivates me every day when I get out of bed to do this work is tzedek tzedek tirdof,” Levine said, referring to a line from Deuteronomy that translates to “Justice, justice you shall pursue.”

“It’s the pursuit of justice,” he said, “which our sages have taught us is such an essential value.”

“He’s not afraid to stand up for the Jewish community and for Israel,” said Greenfield. “I think that positions him well not just for Manhattan borough president but for future citywide office.”

But as Levine prepares for the June election, he swats away any speculation of that kind, even as his newfound status as a de facto public health ambassador has likely introduced him to a number of voters who were unaware of him before the pandemic. “I’ve got my hands full with this race, and being borough president would be a dream job,” he said. “So no plans beyond that.”

He is also, of course, still busy raising awareness about the virus — a job he envisions folding into the borough presidency in one form or another if he is elected. “These are going to still be urgent matters come January 2022,”  said Levine, who is hopeful that the city will soon emerge from dormancy as New Yorkers get vaccinated. Still, “it will be, undoubtedly, a main focus for me as borough president for years.”

“It’s been a year-long fight, and I have seen clear communication as just a pillar of the public health response,” he told JI. “This fight is not over.”