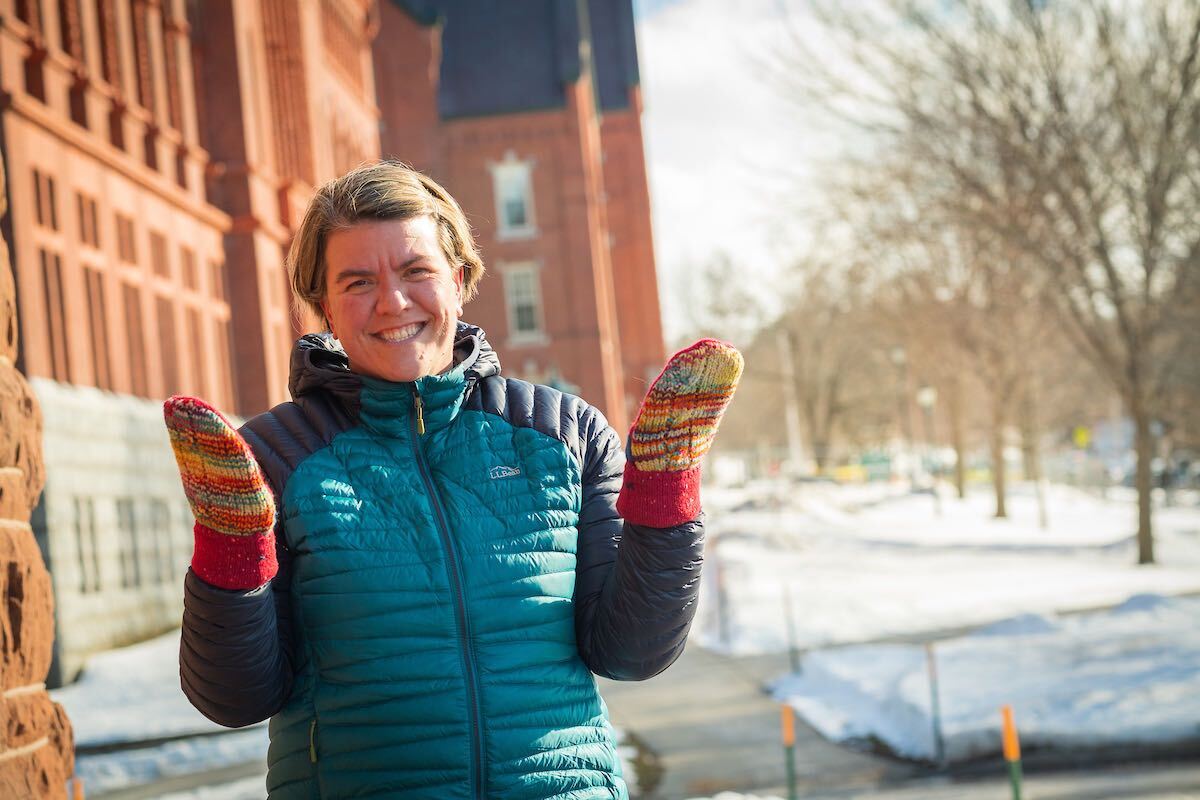 When she became an internet sensation as the woman behind Sen. Bernie Sanders’s (I-VT) viral mittens, Jen Ellis, a 43-year-old Vermont schoolteacher and craft hobbyist, decided that, rather than profit from her newfound celebrity, she would use her platform to promote charitable causes. With that ambition in mind, she has since auctioned off select pairs of mittens while partnering with companies like Vermont Teddy Bears and Darn Tough Vermont to raise money for local nonprofits.

“It has been a crazy few months!” Ellis, who has launched a website, Generosity Brings Joy, to broadcast her many projects, told Jewish Insider in an email earlier this week.

On Wednesday, Ellis — who lives outside Burlington with her partner, Liz Fenton, and their kindergarten-age daughter — participated in what she characterized as one of the most meaningful, though unexpected, experiences to have resulted from her recent success. In a virtual interview filmed by PJ Library, the popular free subscription service for Jewish-themed children’s books, Ellis spoke with a former student, Owen, about the Jewish concept of bal tashchit — which discourages wastefulness.

The idea for the interview came from Alli Thresher, PJ Library’s director of digital content, who reached out to Ellis shortly after the presidential inauguration, when Sanders wore her mittens on national television and photos began to circulate on social media. Thresher was impressed that the mittens — which Ellis had given to her senator as a gift five years ago  — were made from repurposed wool sweaters and recycled plastic, and asked if she would be willing to discuss her process with a child participant.

“One of my personal favorite values that we talk about in our books is the value of bal tashchit, not wasting needlessly,” Thresher told JI. “It’s one of the easiest values to teach kids about.”

Ellis, who isn’t Jewish, was nevertheless enthusiastic about the request — and suggested bringing in Owen, now a third-grader who subscribes to PJ Library, for a Zoom discussion. “His mother came in a couple times to teach us about Jewish traditions and read books to us when he was in my class in first and second grade,” recalled Ellis, who said that Owen is one of just two Jewish students she has taught throughout her 15-year career in public education.

“I have been intentional to give them a platform to talk about being Jewish if they want to, and both of them have,” Ellis emphasized. “I am intentional about teaching the kids about all different religions, cultures and identities.”

In conversation with JI on Thursday afternoon, Ellis said the interview with Owen, who is 9, had exceeded her expectations. “He came prepared with all kinds of great questions,” Ellis remarked, “which he had numbered and written on note cards and clearly practiced.”

They discussed, among other things, why Ellis believes it is important to use materials that would otherwise go into a landfill — and she briefly demonstrated how to salvage old sweaters to make her mittens, which she describes as “swittens,” a portmanteau of sweater and mittens.

“We talked about how when you reuse something you give it a second life,” she said.

Ellis said she was at times amused by the line of questioning, as when Owen —  whose mother did not respond to a request for comment from JI — asked his former teacher how big a snowball she imagined one could pack together with her rustic, paw-shaped mittens. “I said, ‘I think a pretty big snowball,’” Ellis chuckled. “‘The question is, what are you going to do with that snowball?’”

Ultimately, they concluded that the mittens would be best put to use for a snowman.

The video, according to Thresher, will be released online sometime between Passover and Shavuot. “My hope is that we can create a really fun piece about a really wonderful value,” Thresher said, adding that the discussion had “touched on many other valuable Jewish lessons in action: kindness to animals, welcoming guests, feeding the hungry.”

In the past couple of months, Ellis has leveraged her fame in an effort to bring attention to charitable causes. Still, there have been moments in which she has been able to sit back and simply enjoy the benefits of her rare status as a kind of internet celebrity. She spoke with Sanders, whom she long admired but never met, and is now at work on a memoir about her recent experiences.

Her discussion with Owen, particularly amid the pandemic, ranks high among them, she suggested.

“It was wonderful to talk to him,” Ellis told JI. “Normally, when I send a kid to third grade, I would still get to see them in the hall and in the lunchroom and at recess. But this year, because of the pandemic, we’ve been really isolated.”