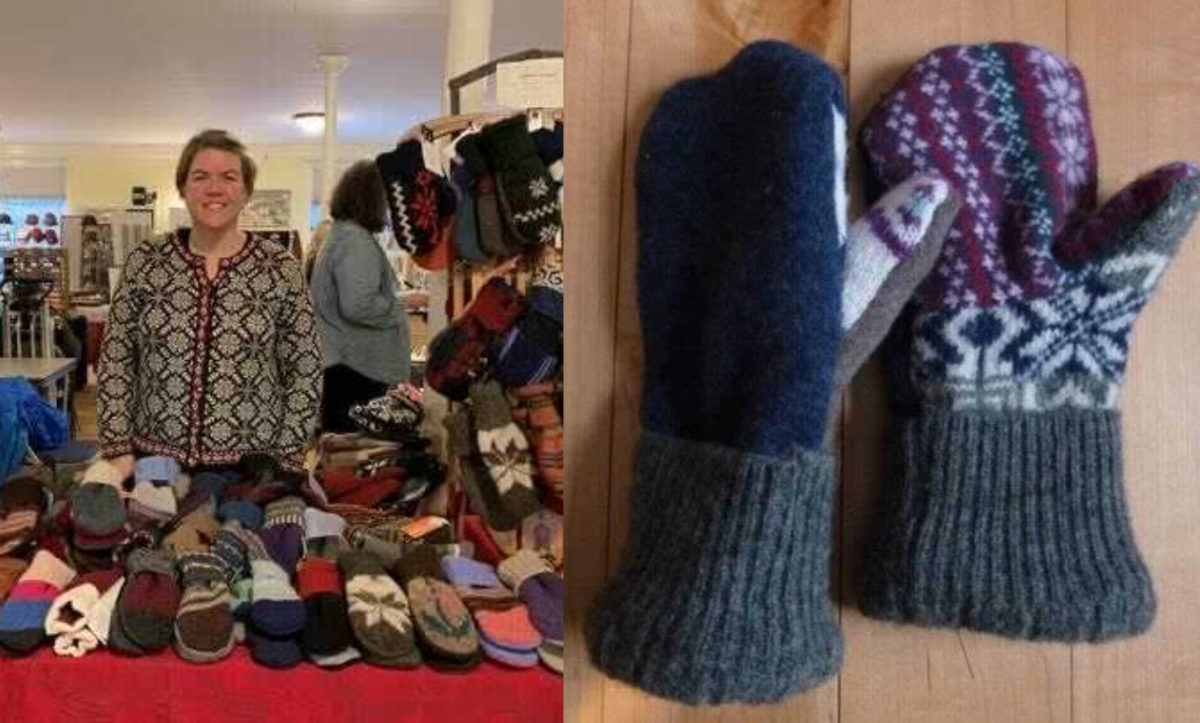 Jen Ellis and her "swittens."

While President Joe Biden was unquestionably the star of Wednesday’s inauguration ceremony in Washington, Sen. Bernie Sanders (I-VT) appeared to have stolen the show on social media thanks to his endearingly grandfather-like attire, including a disposable blue surgical mask, gray Burton winter coat and oversized brown mittens made from repurposed wool sweaters. The mittens, patterned and lined with fleece, were the main attraction, resembling a pair of oven mitts or perhaps two strangely colored paws. The memes, of course, were abundant.

“In Vermont, we dress warm — we know something about the cold,” Sanders said in his characteristically no-nonsense manner in a CBS News interview after the inauguration. “We’re not so concerned about good fashion. We want to keep warm. And that’s what I did today.”

Setting aside the practicality of his ensemble, however, the mittens in particular were no doubt more meaningful than Sanders was letting on. They were made by Jen Ellis, a 42-year-old second grade teacher and craft hobbyist who lives in Essex Junction, Vt., outside Burlington — where Sanders was mayor in the 1980s — with her partner, Liz, and their kindergarten-age daughter. She gave the mittens to Sanders as a gift five years ago, but has never met him, even though she is an admirer.

“He must really like them if he chose to wear them,” Ellis said with apparent glee in an interview with Jewish Insider on Wednesday evening. How did it feel to discover that her mittens had gone viral? “It’s been unexpected,” she replied calmly, going on to add that she had, somewhat alarmingly, received approximately 6,000 emails in the past few hours about an old tweet in which she had advertised her wares. Not an active social media user, Ellis was in the process of figuring out how to log back into her Twitter account so she could announce that, unfortunately, there was no product left in stock. “I don’t have any mittens to sell.”

Despite the interest, Ellis had no plans to meet the demand. “Honestly, I don’t really do it a lot anymore,” said Ellis, who has sold her mittens — which she calls “swittens,” a portmanteau of sweater and mittens — online and at craft fairs. “I’m flattered that they want them, but there are lots of people on Etsy who sell them and hopefully people will get some business from them,” she said. “But I’m not going to quit my day job. I am a second grade teacher, and I’m a mom, and all that keeps me really busy.”

“There’s no possible way I could make 6,000 pairs of mittens, and every time I go into my email, another several hundred people have emailed me,” Ellis added. “I hate to disappoint people, but the mittens, they’re one-of-a-kind and they’re unique and sometimes in this world, you just can’t get everything you want.”

Of course, she has her own personal supply of swittens, which have come in handy — no pun intended — during the pandemic, as she has been conducting classes in the woods beside her school. “I’ve actually been wearing my mittens to teach every day,” Ellis said. “I love them,” she added. “I think it’s a really cool project because it takes a garment, a sweater, that otherwise would have been thrown away. I use sweaters that have moth holes or have ripped or they’ve been sent through the wash and turned into cardboard.”

The fleece lining, Ellis noted, is made from recycled plastic, “which diverts material from the landfill.”

“They’re a lovely gift,” she said. “I often give them as wedding gifts. I put gift cards in them. We have bees, so I will usually put together a little bag of honey and mittens. It’s very Vermonty.”

Ellis was inspired to give a pair to Sanders when he lost the Democratic presidential nomination in 2016 and wanted to lift his spirits. “I didn’t think he was going to run again,” she said. “But I wanted him to.” At the time, Ellis’s daughter was attending a pre-school directed by Sanders’s daughter-in-law, Liza Driscoll, so the opportunity was right to slip him a pair of swittens. “I was making mittens for holiday gifts for the preschool teachers,” Ellis said, “and I made an extra pair for Bernie. I gave them to Liza to give to him, just as a thank you.”

Sanders appears to have appreciated the gesture. He wore the mittens on the campaign trail in New Hampshire, during his second failed presidential bid this past cycle. “Last year when this had a little buzz, somebody made a little clothing line that had a picture of Bernie wearing his mittens and the words, ‘I like Bernie,’” Ellis said. “So I have a couple of those T-shirts, which I think are funny.”

“I’m a fan, and I’ve always voted for him,” Ellis said of her senator, who has served in the upper chamber since 2007. “I agree with his politics. As a teacher, I work with people from all walks of life, and I can see how a lot of people need more help and support. Some of the things that Bernie talks about, like forgiving student loans and free education and just a lot of his humanitarian ideas and things, really align with what I see as a need in our country every day.”

She hopes to cross paths with Sanders at some point in the future. “Someday, maybe he’ll be walking down Church Street, and maybe I’ll just come up and introduce myself and say hi,” Ellis said. “I want him to keep doing what he’s doing and fighting the good fight.”

Still, in the unassuming manner of her political hero, Ellis sought to deflect attention from her mittens and instead drew attention to the historic nature of Wednesday’s inauguration.

“I’ve tried not to let all of the mitten business overshadow the gloriousness of sitting with my five-year-old daughter and my partner and watching the first woman be sworn in as vice president,” she told JI. “That’s amazing. I had to wait four decades for that, and my daughter didn’t even have to wait one. So that really is the true star of the day.”