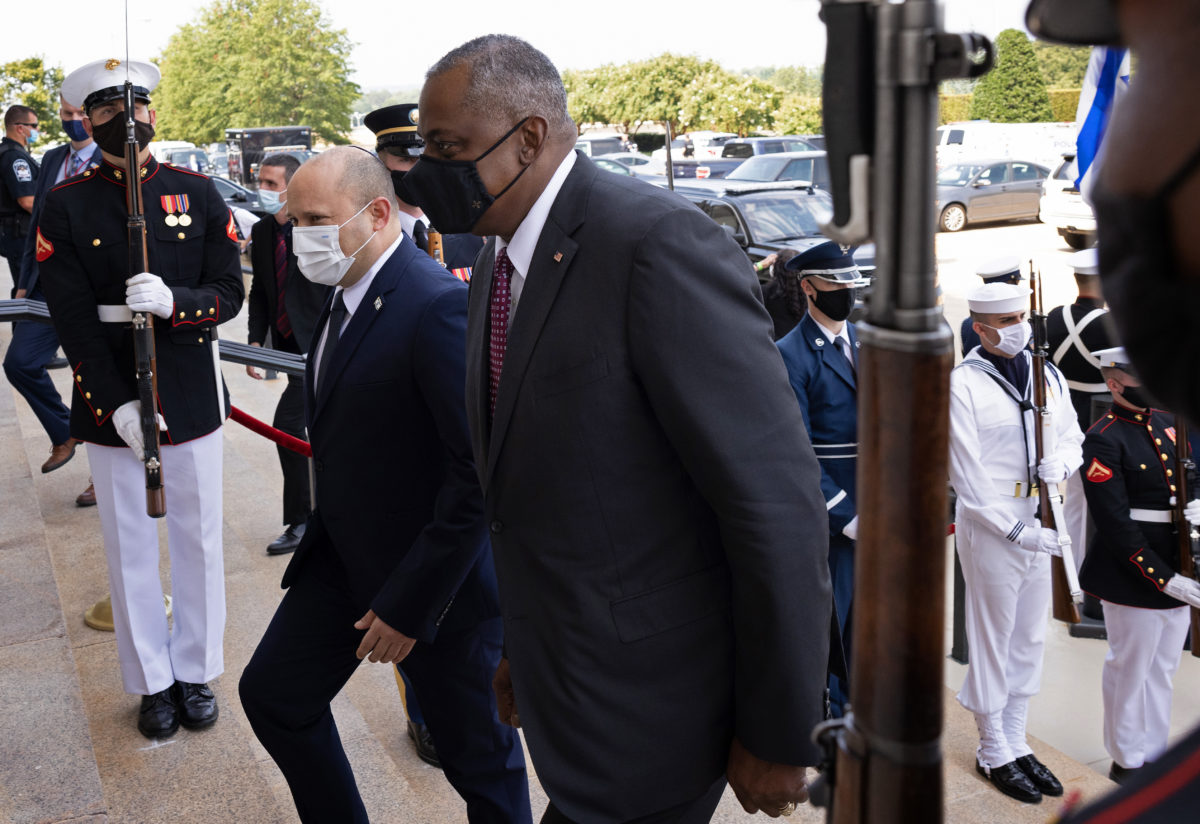 Iran was front and center during Israeli Prime Minister Naftali Bennett’s meetings Wednesday with Secretary of Defense Lloyd Austin and Secretary of State Tony Blinken on his first trip to Washington since ascending to the prime ministership.

In remarks on Wednesday, Austin was upfront that Iran would be the prime focus of conversation.

“Mr. Prime Minister, I look forward to a frank discussion today about Iran’s alarming nuclear steps and continued regional aggression,” Austin said. “Iran must be held accountable for acts of terrorism and aggression, whether in the Middle East or in international waters, like the July 30th attack on the Mercer Street commercial [oil] vessel.”

According to a post-meeting summary by Pentagon Press Secretary John Kirby, Iran was the primary topic discussed, and Austin and Bennett agreed to cooperate on air and missile defense and anti-drone systems.

Later in the day, in his opening remarks prior to his meeting with Blinken, Bennett emphasized that the two would be “primarily” discussing how to “fend off and curtail Iran’s pursuit to dominate the region and its race to a nuclear weapon.”

“We look forward to addressing all of these challenges that we face, particularly regional security and the deep concerns that we share about Iran and the role that it’s playing in the region, including its nuclear program,” he said.

Aside from Iran, in remarks before their meeting Austin highlighted the administration’s support for replenishment of the Iron Dome missile defense system, explaining that the administration is working to provide Congress “all the necessary information to respond positively to your request for $1 billion in emergency funding.”

Austin’s remarks are the first time the administration has explicitly expressed public support for the full $1 billion request. Administration officials told a Senate subcommittee recently that fulfilling that request is, at this point, Congress’ responsibility.

Prior to the Blinken meeting, Bennett also alluded to his goal of resetting relations with the United States, which have become strained in recent years.

“I bring from Israel a new spirit, a spirit of folks who sometimes harbor different opinions but work together in cooperation, in good will, in a spirit of unity and we work hard to find common things that we do agree upon and move forward on it,” Bennett said. “This is the same spirit that I want to bring to our relationship of cooperation, of goodwill, of friendship.”

Blinken also praised Israel’s recent normalization of relations with several Arab states as “a very important development and one that we look forward to helping to build on.”

State Department Spokesman Ned Price said in a statement after the meeting that in addition to discussing Iran, Blinken “emphasized that Israelis and Palestinians alike deserve equal measures of freedom, prosperity, and dignity, which is important in its own right and as a means to advance prospects for a two-state solution.”

Earlier Wednesday, Bennett met with AIPAC CEO Howard Kohr. Bennett “thanked AIPAC CEO Kohr for the organization’s steadfast support for the State of Israel and noted that he views its activity as a leading and integral factor in strengthening Israel’s standing in the US” and the two “agreed to remain in close contact,” according to an Israeli government summary of the meeting.

Bennett will meet today with President Joe Biden. “I know how much President Biden is looking forward to seeing you tomorrow,” Blinken remarked in his opening comments with Bennett.