After more than nine months of online webcasts, most Jewish nonprofits say their audiences are still hungry for more 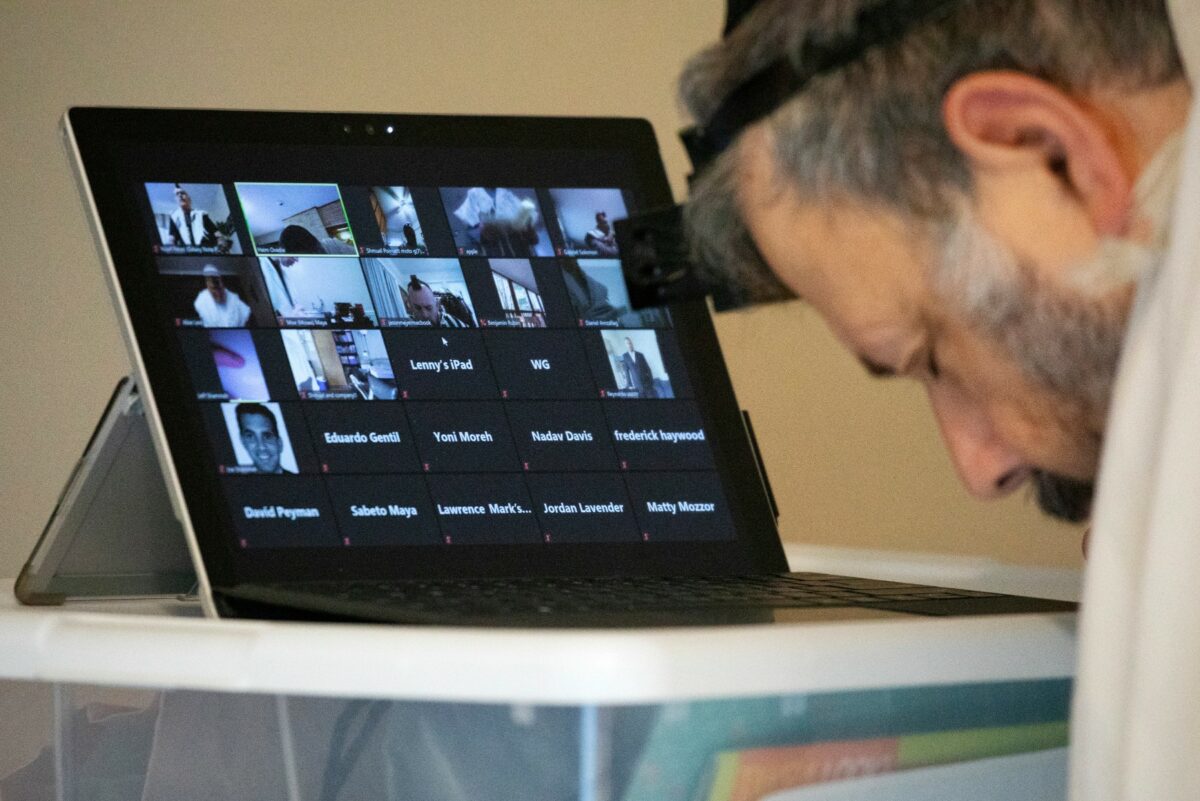 As AIPAC’s annual policy conference in Washington, D.C., wound down in early March, attendees bumped elbows, tapped feet and waved goodbye, joking that they’d see each other in a few months, once the novel coronavirus, which had yet to spread its way across the country, had run its course.

It was the last large-scale gathering for the Jewish community before the pandemic would alter the ways in which we engage with friends, colleagues and loved ones. Within weeks, the world shifted to a new, virtual model to facilitate communication once meeting in-person became unfeasible. Since March, Jewish Insider has tracked the attendance of hundreds of events held for virtual audiences.

The community had its first test over Passover. What may have seemed like a plague in April broke down resistance to online engagement platforms to help people stay connected and engaged.

“Passover helped everybody become ‘Zoom proficient.’ And it was early on in the pandemic, [so] everybody had to learn how to use it and be comfortable with it,” Janice Kamenir-Reznik, the chair of Jews United for Democracy and Justice, a Los Angeles-based network of activists, told JI.

A couple months turned into summer, and then fall. Nine months later, organizations continue to conduct both day-to-day business and large-scale events online, leading to the creation of a new term to describe the exhaustion associated with constant video connectedness: “Zoom fatigue.”

While many of the Jewish non-profit professionals who spoke to JI mentioned “Zoom fatigue,” they say it has not impacted turnout for the hundreds of events, lecture series and galas that have pivoted to the virtual realm this year.

The American Jewish Committee was one of the first organizations to adapt to a virtual setting, holding its first webcast in mid-March and continuing to host several web events each week throughout the pandemic. Since March, the group has held more than 150 webcasts, with most events garnering upwards of 400 participants.

“People are continuing to come back — even when you hear people talking about ‘Zoom fatigue’ and how many virtual programs they’re on — because our numbers have not dipped over the last nine months,” Daniel Silver, AJC’s director of programming for global events, told JI.

In some cases, audiences have grown as the months have gone by. JUDJ’s Kamenir-Reznik has seen engagement rise steadily since her organization first started holding virtual events this spring. The volunteer-led group, which was created in 2017, began holding weekly Zoom events in conjunction with organizations and synagogues in the Los Angeles area once in-person gatherings were no longer possible.

Prior to the pandemic, JUDJ had a monthly lecture series that brought in 600-700 people per event. Since moving to the virtual space, they’ve been able to hold weekly events featuring speakers like the journalist Carl Bernstein, Rep. Adam Schiff (D-CA) and Bill Kristol, with attendance regularly surpassing 3,000 participants per webcast.

Part of their success, Kamenir-Reznik explained, is respecting the time of participants, even in a virtual setting. “You think that more time means you can do it better, which absolutely is not true,” she explained. “I think having a time limit, which you do with Zoom — we created a time limit so people know every Wednesday from 5 to 6, that’s their investment and time. Mark Twain — I think it was Mark Twain — said, ‘Sorry, for the length of my letter, I didn’t have time to make it shorter.’ People can ramble on and on for hours, but it’s not always meaningful.”

Dr. Gady Levy, who runs the Streicker Center at Temple Emanu-El in New York, noted a similar uptick in attendance.

“People adapted very quickly,” he said. “We have registrations from 44 different states, and 22 different countries in addition to the United States. That’s a reach that we had never really imagined before.”

“People are seeking things to do,” he added.

“The Jewish community is really good at many things,” explained Danny Sirdofsky, the development manager at Maccabi USA. “One of them is sticking together in tough times. I think that what a lot of people are striving to find during this time of isolation is community. I know that’s what Maccabi USA is trying to do, and I’m pretty sure that’s what all these other Jewish organizations are trying to do, too. It’s to build a community where people feel like they’re still having personal connection with others, despite physical, social distancing.”

Maccabi USA has been holding weekly events featuring Jewish athletes and other big names in the world of sports, which Sirdofsky said has provided an opportunity to forge cross-generational connections.

“It’s really been a great way to rekindle the connection we have with some of our older alumni,” he said. “We’ve had a lot of really touching events where a lot of them are back on, and really bonding over, you know, past shared experiences they’ve had with each other in Israel, or Europe or Pan Am, or wherever. And that’s been the most pleasant surprise, I think, [that] this virtual online movement is not just for young people, it’s been for the older generation as well.”

The shift to virtual programming allowed many organizations to reach beyond their typical audiences. Hillel International launched “[email protected]” in the spring to help local Hillels stay connected to college students. In the nine months since the program’s inception, Hillel International has connected with thousands of formerly unengaged students — and now has greater capacity to reach those who aren’t yet college students.

“This gave us a chance to give people a quick taste of a lot of different campus environments and Jewish environments on campus, through a really concentrated program across the movement,” said Kravetz, noting that the virtual college fair concept was likely to be replicated post-pandemic.

[email protected] averages three to five programs a week on a range of topics from cooking demonstrations to yoga classes to author interviews. The all-virtual setting has allowed smaller Hillels with less funding and access to high-level programming to offer new kinds of content to its students.

“Without the barriers of geography, campus, even age cohort, and frankly, organization, we’ve been able to work a lot more collaboratively across the Hillel movement, between Hillels and actually also with external organizations,” explained Kravetz. “155 individual Hillels have in some way partnered on a [email protected] program and therefore taken part in these big national events. And so in many ways, I think what it’s done is it’s equalized those kinds of opportunities with some major speakers and stars and celebs and media and high-level educators in a way that wasn’t possible before the pandemic.”

In many ways, the move to all-virtual settings has saved organizations — and participants — time and money.

Kamenir-Reznik’s JUDJ did not have the financial resources available to most groups. As a California-based organization, many of their speakers had to be flown in from the East Coast. While the group does not charge for events, Kamenir-Reznik found that participants were happy to contribute — many of their own volition.

“People are fair minded, [they figure] if they’re watching these programs, somebody’s paying for them, and [they] should chip in [their] fair share, and they do. So we’ve never had any financial stresses about being able to continue. We’ll be able to go into 2021 with the capacity to continue these programs, as long as our audience continues to feel that they’re beneficial.”

One thing lost in the pivot to Zoom, speakers tell JI, is the personal connection with an audience.

“People are eager for all the kinds of human connection that events used to provide, right?” New York Times columnist Bret Stephens told JI. “You went to an event, and it wasn’t simply a matter of listening to the speaker who might interest you. It was also a social occasion, it was a dinner, it was schmoozing. There were all kinds of things that go around simply delivering a talk that audiences just enjoy. And people can also eat at home, but everyone wants to go out to a restaurant, by the same token. There’s just a social instinct that people feel they’ve been deprived of. And I suspect that that’s going to happen once the threat of COVID lifts in a way that makes it safe to host events.”

Stephens predicted that when in-person gatherings are again possible, some speakers may no longer agree to address virtual events.

“It’s wonderful that technology allows us to connect in this way as a substitute for genuine human interaction. [But] it’s totally inadequate, and I hope we don’t civilizationally become accustomed to a world in which we’re online more often than we’re offline.”

In the days of in-person gatherings, Levy told JI that he would quip at the beginning of programs that the Streicker Center was the “new cheder.”

But now? “Zoom is the new cheder.”