Hoyer, McCarthy: We hope Tlaib, Omar learn from their time in Israel 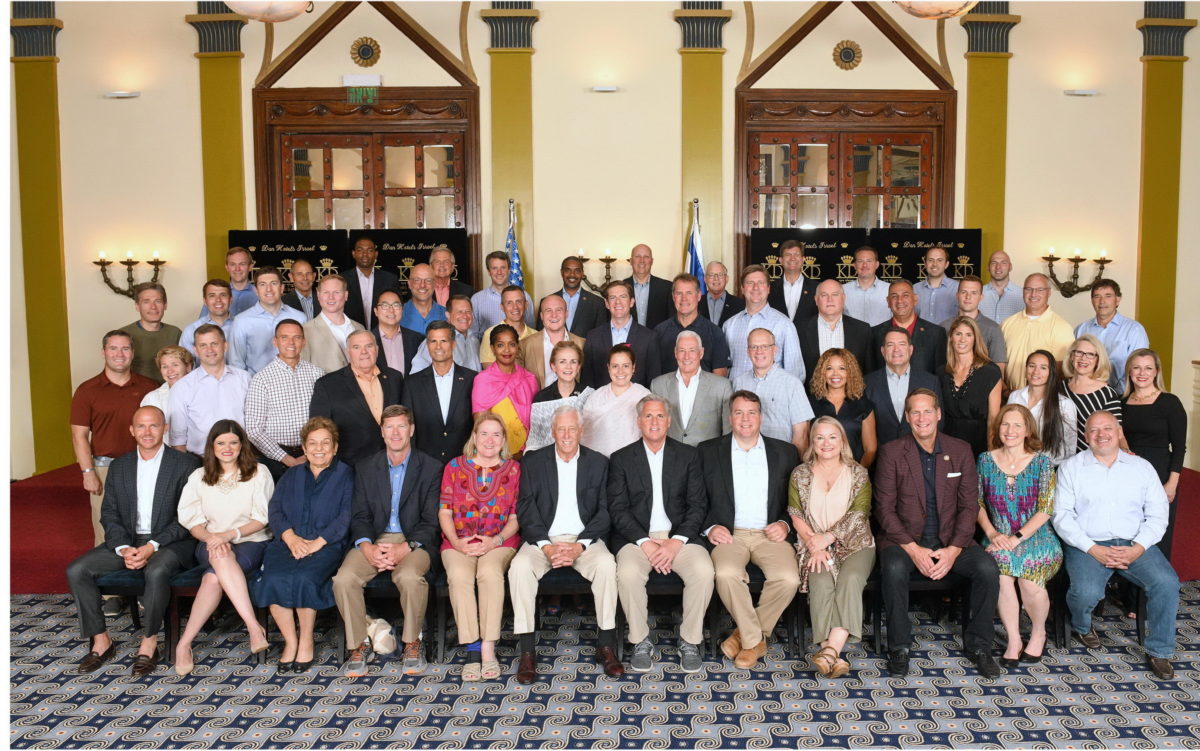 Democratic and Republican congressmen visiting Israel on an AIPAC-led trip pose for a photo this weekend at the King David Hotel in Jerusalem.

More than 70 members of the United States Congress were in Israel this weekend as two AIPAC-affiliated trips visited the country. But much of the buzz surrounding the Democratic and Republican trips — which overlapped for several days this weekend — was focused on those who were not in attendance, in particular Reps. Rashida Tlaib (D-MI) and Ilhan Omar (D-MN), who are planning their own alternate visit to the region later this month.

“I think and I presume Ms. Tlaib and Ms. Omar will hear things and see things — hopefully will talk to as many people as we talk to, and get a broad perspective and draw their conclusions,” said Hoyer at the press conference in Jerusalem’s King David Hotel. “If they do that, I think they will [have] a better understanding and better support for the interest of both of the Israeli and the Palestinian people.”

Hoyer and McCarthy were joined Sunday morning by most of the 72 members of Congress currently in Israel on the two trips. The 41 Democrats and 31 Republicans — the majority of whom are freshmen representatives — overlapped for just a few days on the trips organized and sponsored by AIPAC’s educational arm, the American Israel Education Foundation.

McCarthy denied a recent report by Channel 13’s Barak Ravid that President Donald Trump was disappointed by Prime Minister Benjamin Netanyahu’s decision to allow Tlaib and Omar to enter Israel. “I do not know of the president being disappointed in that,” he said Sunday. “I speak to the president daily.”

Hoyer noted that White House press secretary Stephanie Grisham also dismissed the report, calling it “fake news.” He added that Israeli Ambassador to the U.S. Ron Dermer assured the House that “any member of Congress was welcome to come to Israel.”

Hoyer said that Tlaib, Omar and Rep. Alexandria Ocasio-Cortez — if she chooses to join them — “all three are very bright… there’s an openness to learn.”

McCarthy added: “Anybody that is actually on the ground and sees the situation will walk away with a difference of opinion.” He noted that he wished Tlaib and Omar had opted to join the larger ongoing congressional trip.

Both Hoyer and McCarthy stressed the bipartisan nature of support for Israel, pointing out that it is rare to see 72 members of Congress — more than 16% of the legislative body — gathered in any place outside of Washington.

Hoyer, who presided over the Democratic trip that comes to an end on Monday, said the group had met with Prime Minister Benjamin Netanyahu, de facto Opposition Leader Benny Gantz and Palestinian Authority President Mahmoud Abbas, as well as many people in the economic and nonprofit sectors in Israel.

“Frankly I did not hear anything new,” Hoyer said. “He indicated he was prepared to sit down and negotiate without preconditions — and then he referenced a number of preconditions.” Nevertheless, Hoyer said, he felt it was important for the new members of Congress “to go to Ramallah and to hear Abbas, who is in his 14th year of a five-year term.”