White House, Congress standoff over F-16 sale to Turkey returns to the fore

Sen. Bob Menendez is vowing to block the arms sale to the NATO ally; he’s supported by a bipartisan group of lawmakers, as well as the American Jewish Committee 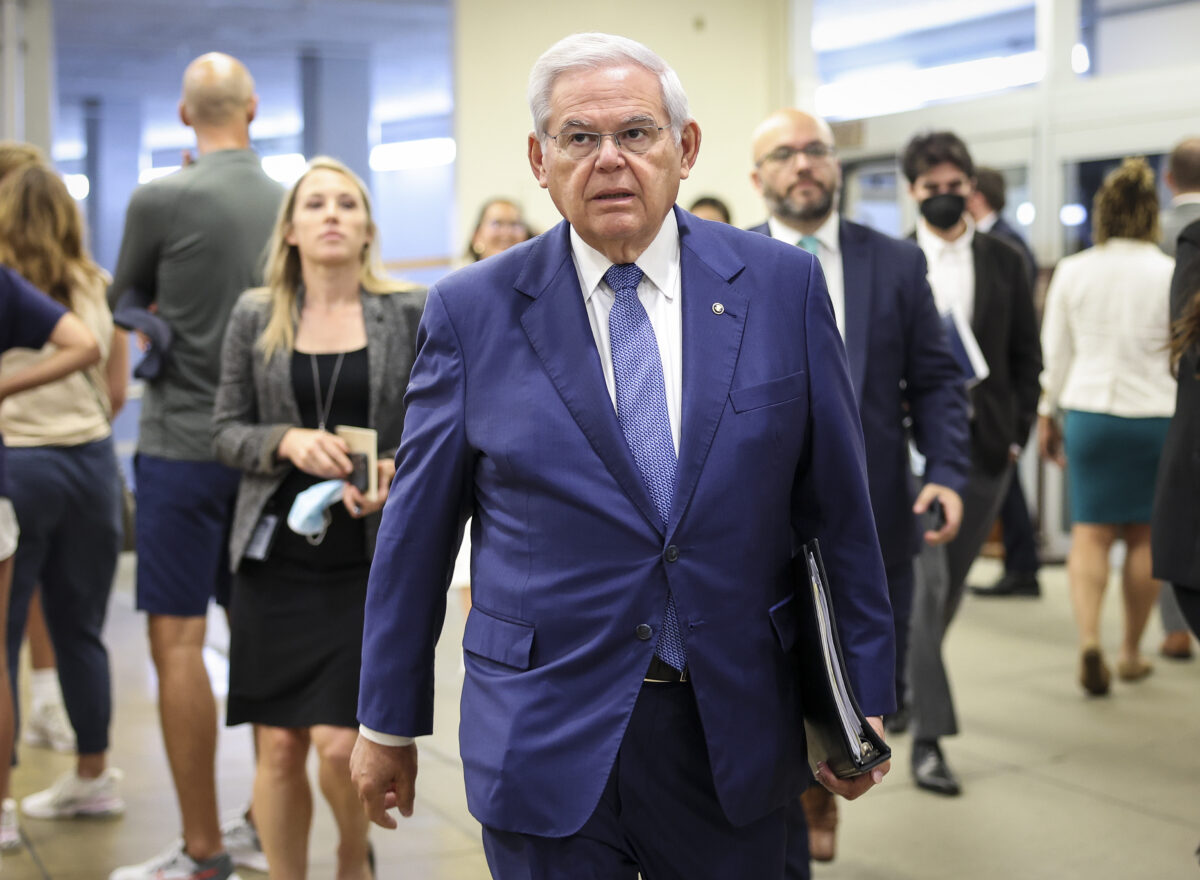 Sen. Bob Menendez (D-NJ), Chairman of the Senate Foreign Relations Committee, makes his way to the Senate Chambers at the U.S. Capitol on August 03, 2022, in Washington, D.C.

The news last week that the White House plans to seek congressional approval to sell $20 billion worth of F-16 fighter jets to Turkey renewed a standoff between the administration and key congressional leaders.

Turkey first requested to purchase the planes, as well as equipment to upgrade their existing F-16 fleet, in October 2021. But lawmakers on both sides of the aisle — most notably Sen. Bob Menendez (D-NJ), chairman of the Senate Foreign Relations Committee, who can unilaterally place an informal hold on the sale — have attempted to put up obstacles to the deal and otherwise pushed back against it. Opponents of the sale also have the support of some leaders in the U.S. Jewish community.

Sources of concern about the sale are numerous, many of which Menendez outlined in a speech late last year: Turkish fighter jets have routinely violated Greek airspace; Turkish President Recep Tayyip Erdogan threatened missile attacks on Athens; Turkey has increased its ties with Russia and Iran; Turkey has attacked U.S.-allied Kurds in Syria; and territorial disputes over Cyprus are ongoing.

“As I have repeatedly made clear, I strongly oppose the Biden administration’s proposed sale of new F-16 aircraft to Turkey,” Menendez said in a statement last week. “President Erdogan continues to undermine international law, disregard human rights and democratic norms, and engage in alarming and destabilizing behavior in Turkey and against neighboring NATO allies. Until Erdogan ceases his threats, improves his human rights record at home – including by releasing journalists and political opposition – and begins to act like a trusted ally should, I will not approve this sale.”

Turkey has also slow-walked the accession of Finland and Sweden to the North Atlantic Treaty Organization — an issue other lawmakers, such as Sen. Chris Van Hollen (D-MD), have framed as a condition for the F-16 sales.

And Turkey previously purchased Russian S-400 surface-to-air missile systems, leading the U.S. to expel it from the F-35 fighter jet program, due to concerns that the S-400s could allow Russia to compromise the next-generation fighter aircraft.

A Jewish community leader, who requested anonymity to speak freely on the sensitive issue, told Jewish Insider this week that — in spite of Turkey’s steps toward restoring normal relations with Israel and the nation’s geo-strategic importance — its ongoing tensions with NATO, Greece and Cyprus, its democratic backsliding and its harboring of Muslim Brotherhood and Hamas officials continue to pose concerns for some in the Jewish community.

“It’s understandable that organizations that care deeply about Western values, care deeply about the democracy in and across the region and care deeply about the sovereignty of its neighbors would want to see changes in Turkish government behavior before agreeing to the substantial upgrading of the military capabilities of Turkey,” the leader said. “This is not about Israel’s strategic interests so much as the behavior of a country that is an unreliable NATO partner and poses threats to other NATO allies.”

The individual added that he has not heard from within the Jewish community or Israel that the F-16 sale could have security implications for Israel or the Middle East, a view echoed by other experts who spoke to JI.

“As someone who’s very pro-Israel, I don’t have any concerns vis-a-vis Israel in terms of this sale going through,” Bradley Bowman, the senior director of the Center on Military and Political Power at the Foundation for Defense of Democracies, told JI, noting that Israel already possesses more-advanced F-35s and other advanced military capabilities.

The administration’s informal notification to Congress about the F-16 sale was accompanied by an announcement that it will sell F-35s to Greece. Soner Cagaptay, the director of The Washington Institute for Near East Policy’s Turkish Research Program, told JI that the administration likely hoped the Greek deal would alleviate concerns by essentially guaranteeing a qualitative military edge to Greece in the Eastern Mediterranean.

“The problem with this ‘deal’ is that nobody objects to Greece getting F-35s,” Cagaptay continued. “So it’s not as if this is a sweetener to Menendez. Greece gets F-35s whether or not Turkey gets F-16s.”

If the administration decides to do so, it can push ahead with the sale over Menendez’s hold. Both chambers of Congress would have to pass a joint resolution of disapproval to block it, but Congress has never managed to secure the two-thirds majorities in each chamber necessary to override a presidential veto and actually block any foreign arms sale. Cagaptay predicted it would not be able to do so in this case either.

A senior U.S. official told Reuters that the administration would be unlikely to try to override Menendez.

Bowman emphasized that Turkey has “in recent years… often been an ally in name, but not in actions,” criticizing Ankara’s “behavior” relating to the S-400s, Syria, Greece and Finland and Sweden.  But he also noted there are potential benefits to allowing the sale to proceed, rather than pushing Turkey toward another potential supplier for the necessary upgrades to its fighter fleet.

“When allies and partners buy weapons from us, that accrues — many times — 20-, 30-plus year benefits for us,” Bowman explained. “It creates all kinds of interoperability benefits, readiness benefits, diplomatic and other benefits that accrue to us. And so I would rather have those benefits come to us than to Russia or China, or even France.”

Bowman also noted that the sale could help pull Turkey back from its increasing ties with Russia and that the F-16 sale poses lesser “risks” than an F-35 sale would have.

As of now, the administration and Turkey appear set to push ahead toward pursuing the sale — although it has not said when it will send a formal notification of the sale to Congress. Secretary of State Tony Blinken met yesterday in Washington with Turkish Foreign Minister Mevlüt Çavuşoğlu, during which the two sides discussed “strengthening the U.S.-Türkiye defense partnership,” including the F-16 sale, according to a joint statement.

The meeting also included discussions on Swedish and Finnish inclusion in NATO, “the importance of preserving stability and channels for communication” in the Eastern Mediterranean and military action in Syria. Following the meeting, Çavuşoğlu told reporters that he urged Blinken not to link the F-16 sale to the NATO accession issue.

Cagaptay predicted little movement on the F-16 sale until after Turkey’s elections in May, after which he said Turkey’s leadership — whether that be Erdogan or his opposition — will likely be more willing to ratify Sweden and Finland’s accession to NATO. He said that a possible announcement that Blinken will visit Turkey would signal that the administration plans to continue seriously pursuing the sale.