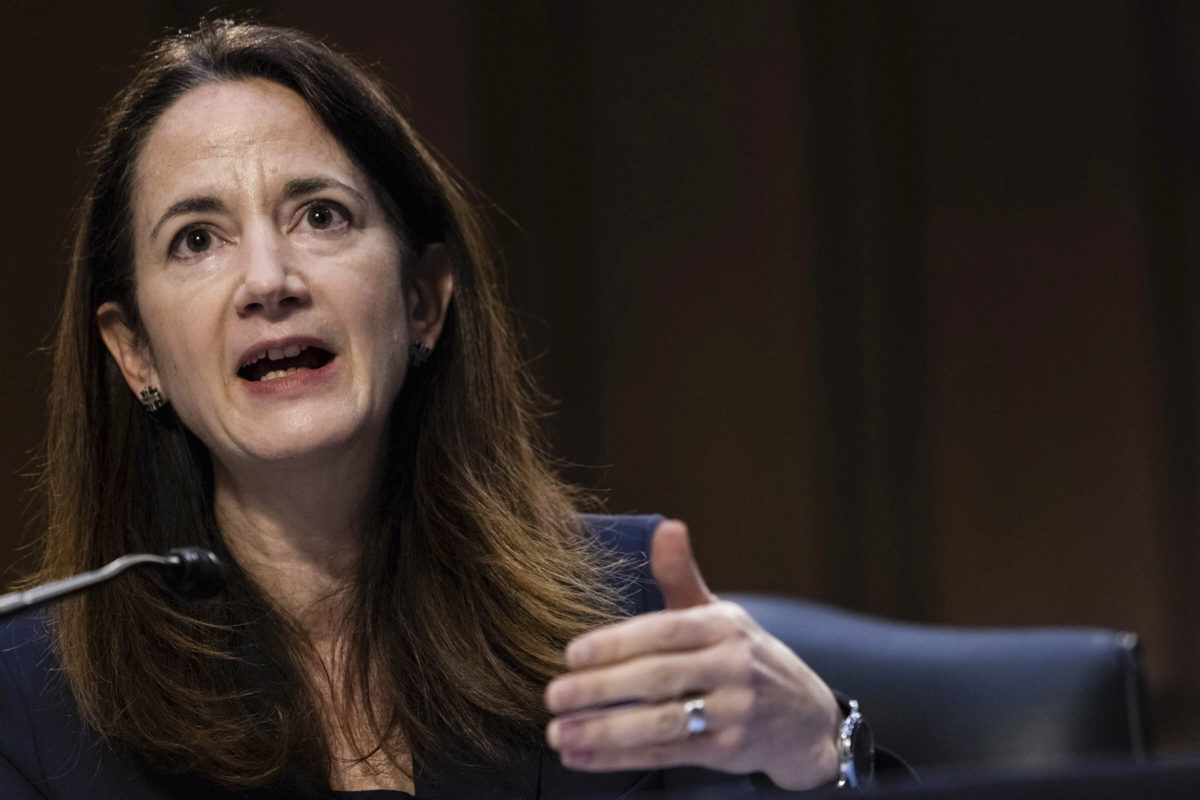 Director Avril Haines of the Office of the Director of National Intelligence (ODNI) testifies during a Senate Select Committee on Intelligence hearing about worldwide threats, on Capitol Hill in Washington, Wednesday, April 14, 2021.

Iran poses a continuing, and potentially rising, threat to the U.S. and Israel in the coming year, intelligence community leaders warned during a Senate Select Intelligence Committee hearing Wednesday.

The hearing comes a day after the release of an intelligence community report outlining what intelligence officials see as the greatest threats to U.S. security in the coming year. Global threats hearings — usually held annually — are one of a limited number of opportunities for the American public to hear from leaders across the intelligence community, but did not take place in 2020 out of concern that officials’ comments might anger then-President Donald Trump.

At Wednesday’s hearing, director of National Intelligence Avril Haines warned that Iran will remain a destabilizing regional actor in the Middle East, and continue its efforts against Israel.

“Iraq will be a key battleground for Iranian influence in the coming year, but Tehran will also continue to pursue a permanent military presence in Syria, destabilize Yemen and threaten Israel,” Haines said. “The iterative violence between Israel and Iran… [has] the potential to escalate or spread.”

Responding to a question from Senate Foreign Relations Committee Ranking Member Jim Risch (R-ID) about why the Abraham Accords, which normalized relations between Israel and several Arab states were not mentioned in the intelligence community report, CIA Director William Burns praised the agreement.

“The United States welcomes and supports the recent normalization agreements. We will continue to urge more countries to normalize relations with Israel and will look for other opportunities to expand cooperation among countries in the region,” Blinken said. “I expect Israel’s group of friends to grow even wider in the years ahead,” noting that Israel has established ties with countries “from Morocco all the way to Bhutan.”

Intelligence officials expounded further on the Iranian threat in an annual threat assessment published on Tuesday, which lists Iranian provocations among the most pressing global threats in 2021.

The report warns that, despite Iran’s “deteriorating economy” — largely a result of crippling sanctions imposed on the regime — and its “poor regional reputation,” it will use all tools at its disposal to advance its goals, including “diplomacy, growing its nuclear program, military sales and acquisitions and proxy and partner attacks.”

“We expect that Iran will take risks that could escalate tensions and threaten U.S. and allied interests in the coming year,” the intelligence community determined. “Tehran’s actions will reflect its perceptions of U.S., Israeli and Gulf state hostility; its ability to project force through conventional arms and proxy forces; and its desire to extract diplomatic and economic concessions from the international community.”

The report’s authors suggest that Iran will fuel proxy attacks on U.S. assets through Shia militias in Iraq, which “will be the key battleground for Iran’s influence… during the next several years,” also noting that Iranian threats to the U.S. are primarily focused on the U.S. presence in the Middle East and South Asia

Iran is also “not currently undertaking the key nuclear weapons-development activities that we judge would be necessary to produce a nuclear device,” officials wrote.

The report, which was finalized prior to last weekend’s incident at the Natanz nuclear facility, after which Iran said it would enrich uranium to 60%, predicted that Iran might make such a move, and could potentially build a new 40-megawatt heavy water reactor at one of its nuclear sites if the U.S. does not roll back sanctions on the Iranian regime.

The report also lays out challenges that U.S. negotiators face in ongoing negotiations with the Iranian regime.

“Regime leaders probably will be reluctant to engage diplomatically in talks with the United States in the near term without sanctions or humanitarian relief or the United States rejoining the Joint Comprehensive Plan of Action (JCPOA),” it reads. “Iran remains committed to countering U.S. pressure, although Tehran is also wary of becoming involved in a full-blown conflict.”

During the hearing, senators also questioned intelligence officials on the elevated threats posed by domestic violent extremists, including adherents of the QAnon conspiracy theory, which incorporates antisemitic tropes.

FBI Director Christopher Wray said that the bureau focuses on online extremism and conspiracy theories when “we are concerned about the potential that those things can lead to violence.”

“Where it is an inspiration for federal crime, we’re going to aggressively pursue it,” Wray said.

“Like a lot of other conspiracy theories, the effects of COVID — anxiety, social isolation, financial hardship, etc. — all exacerbate people’s vulnerability to those theories and we are concerned about the potential that those things can lead to violence,” he said.

The FBI director added that his agency will soon be issuing an unclassified report on QAnon.

Wray also said he had yet to review a letter sent to him yesterday by 18 Senate Republicans requesting an investigation into whether Pentagon nominee Colin Kahl improperly disclosed classified information via Twitter.

The officials will return to Capitol Hill on Thursday for a similar hearing with the House Permanent Select Committee on Intelligence.