Peeling back the ‘Layers’ of Jewish women

In a new book, photographer Shira Lankin Sheps works to break the stigmas that lead many women to stay silent about their struggles 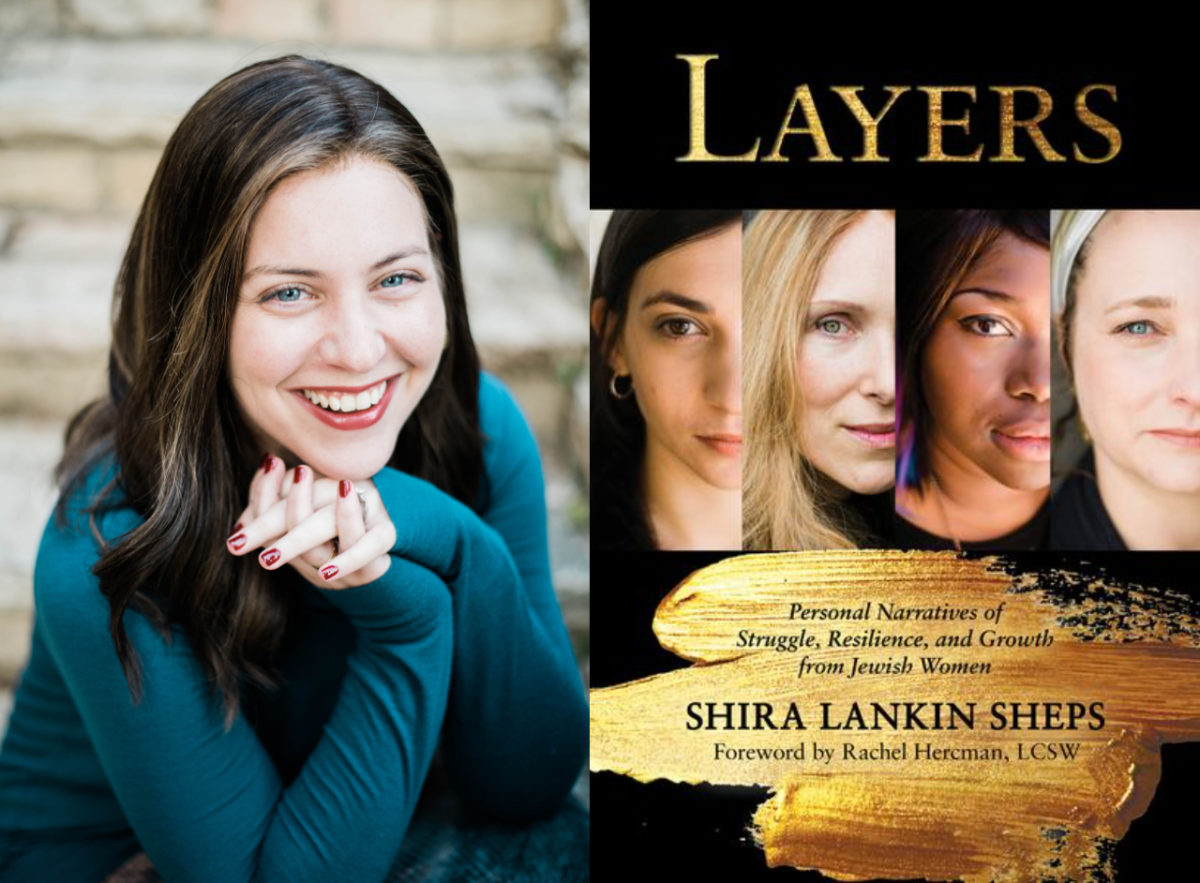 Malka refused to let cerebral palsy limit her life ambitions. Shira battled bulimia and metastatic cancer to finally reach a place of self-acceptance. Aviva is working to break the stigma of bipolar disorder. Lucie struggled to find a support system after converting from Catholicism to Judaism in France. Zehava never felt like she fit in anywhere until she settled in Israel with her interracial Chabad family.

For four years, Shira Lankin Sheps, 33, has been telling the stories of Jewish women and their unique struggles and challenges via social media, through The Layers Project. Now, in a new book from Koren Publishers, titled Layers: Personal Narratives of Struggle, Resilience, and Growth from Jewish Women, Lankin Sheps spotlights 34 women from around the globe and tells their own unique, deeply personal and oftentimes painful stories. The book arrived on shelves in North America earlier this month, and will be released in Israel in the coming weeks.

“I think as women, there are just such unrealistic expectations that society places on us and such unrealistic expectations that we place on ourselves,” Lankin Sheps told Jewish Insider during a recent interview at a cafe in north Jerusalem. Jewish women in particular, and observant Jewish women even more so, often feel an extra burden to be the perfect wife, mother, career woman, chef, chauffeur and everything in between, she said. And if any one of those layers shift out of place, it can upend your sense of self.

“Anything that prohibits you, or is a barrier to being all the things that are expected of you, or that you’ve been acculturated or raised to expect of yourself, is incredibly painful and can be shameful,” Lankin Sheps suggested.

The mom and trained social worker first set off on this journey after her own personal struggle — one she kept quiet for a long time. For an extended period, she suffered from an undiagnosed chronic illness that left her largely bed-bound, and unable to work or care for her family. But she hid her sickness from most of her friends.

“I was very ashamed, but it was so dumb,” she said. “I didn’t do anything wrong. I was just sick,” she recalled. “At a certain point, I realized that the shame was killing me faster than the illness.”

Lankin Sheps opened up about her experience in a blog post, and the reactions came flooding in. “I got a really huge influx of support,” she said, “that was very surprising to me.”

While she wasn’t well enough to begin working as a social worker, Lankin Sheps started to pick up photography. But soon she felt a yearning to undertake a project imbued with greater meaning. She issued a call looking for women who were interested in opening up about their challenges, their struggles and the stigmas that come along with them.

“Twenty women messaged me in the first hour,” she recalled. At first she was shocked that so many women were willing to be so open and vulnerable on the internet. “And then I stopped being surprised. And I started to get it.”

For four years, Lankin Sheps has told the stories of women facing infertility, depression, anxiety, cancer, terrorism, racism, divorce, abuse, widowhood, eating disorders, grief and countless other challenges. In a series of photos accompanying Facebook and Instagram posts — and more recently on her online magazine — she delves into some of the most painful details of women’s lives, telling each story in a style reminiscent of that made famous by Humans of New York creator Brandon Stanton.

And she chooses her subjects — who generally approach her — with great caution.

“The people who I choose to work with are people that want to be activists for their cause,” she said. “It is really very, very difficult to be so emotionally vulnerable online.”

Lankin Sheps works carefully with each woman to ensure they are ready to come forward and be fully public with their stories. She speaks with each woman often for hours, and travels to photograph them in their own spaces, where they feel most comfortable and free. Her photographs are intended to showcase the women at their most comfortable, at ease with themselves and their stories.

“It’s a very careful process to ensure that people are ready and healthy,” she said. While she is not currently a practicing social worker, “all my clinical skills are at play every single day,” she added. “This is clinical work. It’s communal work, it’s writing for social change. And it’s very intentional and specific.”

The book — and the magazine — was written in consultation with Rachel Hercman, a practicing psychotherapist based in Manhattan. “She carried the load with me,” said Lankin Sheps. “Her insights were integral to the process.”

In 2018, a year and a half into her Layers Project journey, Lankin Sheps and her family moved from New Jersey to Israel and settled in Jerusalem. Within a few days of her aliya, she was approached about turning the project into a book. After a few bumps along the way, she signed a deal with Koren Publishers to photograph and tell the stories of dozens of women living in Israel.

And she selected each profile for the book with great care. Though she and Koren initially agreed on 25, she felt strongly that these 34 women all needed to be included. “I wanted to make sure that there were women from all over the world featured,” she said. “These women are immigrants and they’re refugees, very few of them are sabras. I really wanted to capture the immigrant experience.”

Photographing, writing and editing the book — which was delayed and updated due to COVID-19 — was an intense experience for Lankin Sheps. But she is immensely proud of the final product.

“It’s going to leave you feeling broken and whole and inspired and sad and joyful — and moved,” she said, noting that she dropped early copies off with friends along with a box of tissues.

When she first started out, Lankin Sheps said, a lot of the issues she chronicled were not nearly as common on social media as they are today.

“The landscape of social media is radically different today than when we first started,” she said. “Social media was a highlight reel. It was just the best of the best. It was just your perfect, filtered happy moments. That’s what it was back then; it was really toxic.”

But the posts she began sharing that talked about women’s fears, struggles and journeys received near-unanimous support from those who read them. The community that sprung up around the Layers Project was supportive, empathetic and energized.

And while she doesn’t shy away from tough topics, Lankin Sheps says she is cautious and considered in her approach.

“I think that social justice writing or social change writing has to be done from the inside,” she said. “I know my community, and it requires a really slow moving of the dial; you have to just keep moving the line forward really slowly. You have to keep gaining trust, you have to keep having those really important conversations, you have to keep resonating with them. And you have to do it in a way that’s healthy for the community — that they’re ready for it.”

Lankin Sheps estimates that about 80% of her regular readers online are women. But she is optimistic that a greater number of men will take an interest in the stories and in the book.

“I really think it’s tremendously important for men to care about our issues,” she said, “and want us to come to the table and want to listen to what we have to say and what hurts us and what heals us.”

With the book finally out in the world, Lankin Sheps is thinking about her next project, and dabbling in writing fiction for the first time. After all, she said, the profiles in the book and in the Layers Project are not her own stories or told in her voice.

“These stories are not my own words,” she said. “It’s their voices, their words. I’m just there to shape it, to photograph it, to give it context and to put it out into the world.”