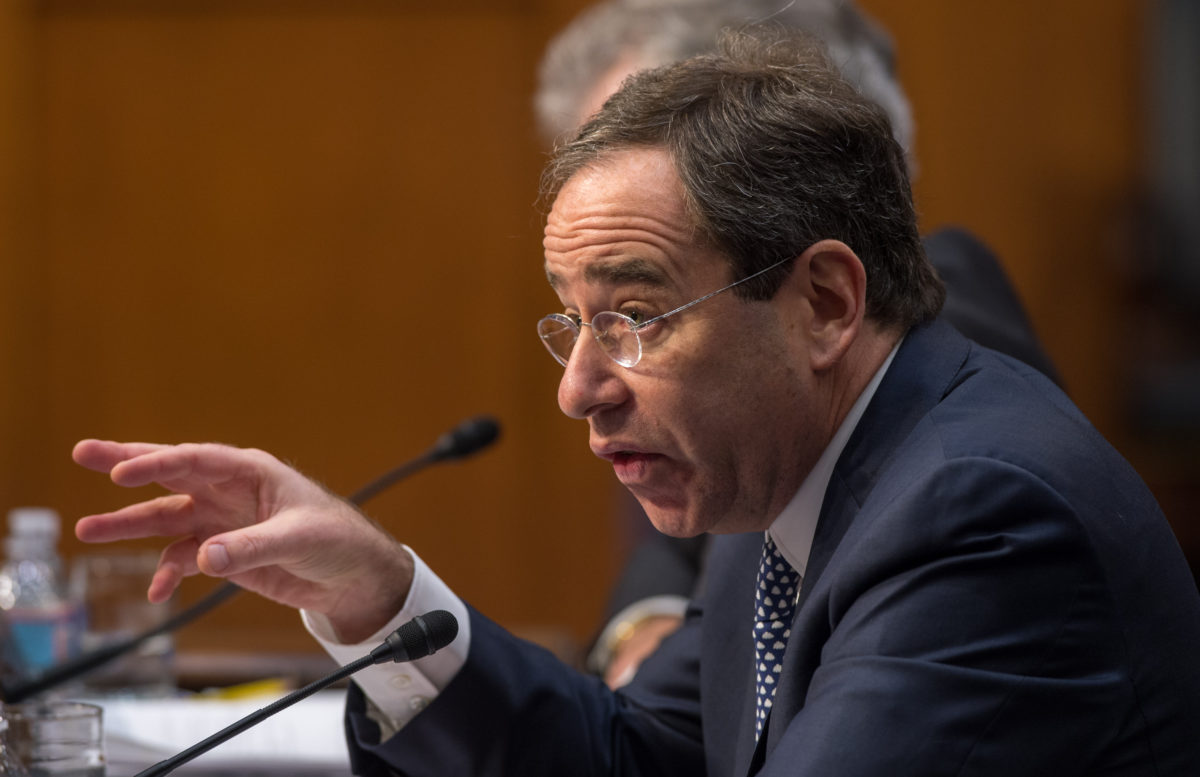 Thomas Nides, Deputy Secretary of State for Management and Resources, speaks during the Senate Foreign Relations Committee hearing on the Sept 11, 2012 attacks on the U.S. Consulate in Benghazi, on Capitol Hill, December 20, 2012 in Washington, DC.

Tom Nides, President Joe Biden’s nominee for U.S. ambassador to Israel, sailed through his Senate Foreign Relations Committee hearing on Wednesday, receiving praise from senators on both sides of the aisle.

Nides, the managing director and vice chairman of Morgan Stanley and a former deputy secretary of state for management and resources, largely stuck to the administration’s positions on a range of issues; those included peace efforts between the Israelis and the Palestinians, the Abraham Accords, Jerusalem’s status as Israel’s capital, support for Iron Dome resupply, reopening the Jerusalem consulate that serves the Palestinians, Iran policy, the Golan Heights and assistance to Palestinians.

“I don’t think any one of us believes that is achievable in the next couple weeks,” Nides said of a two-state solution. “I do believe that we need as a government to continue to create the pathway to achieve that” by emphasizing the importance of a two-state solution, providing aid to the Palestinians and dissuading both sides from provocative unilateral actions.

Nides said that his “North Star is a democratic Jewish state” and argued that the Abraham Accords, the normalization agreement between Israel and several Arab nations, make it “stronger,” and benefit both the U.S. and the Palestinians.

He was also questioned on the wisdom and propriety of providing U.S. aid to Palestinian NGOs whose assets, under Palestinian Authority law, can be seized by the PA. The Taylor Force Act blocks the U.S. from providing most direct aid to the PA as long as it continues its policy of paying the families of terrorists.

Nides said he was not aware of the PA policy in question, but “the Taylor Force Act is the law of the land and we will abide by any laws on the books.”

He defended the administration’s push to reopen the U.S. consulate in Jerusalem, which traditionally served as a liaison with the Palestinians and was shuttered by former President Donald Trump in 2019. The move is opposed both by Republicans and the Israeli government.

Nides was also asked about the PA’s long-delayed elections, which the governing body has blamed on Israel’s unwillingness to commit to allowing Palestinians living in Jerusalem to cast their ballots.

Nides’s testimony earned him praise from committee members across the political spectrum.

Sen. Chris Van Hollen (D-MD) told JI that Nides “did a good job.” Sen. Chris Murphy (D-CT) said he “appreciated [Nides’s] strong defense of the United States as a broker for peace” and his support for reopening the Jerusalem consulate.

Even Republican committee members who have clashed frequently with the administration on Israel and Middle East policy offered praise for Nides.

“He’s impressive… I think he’s a good choice,” Committee Ranking Member Jim Risch (R-ID) said, adding that he plans to vote for Nides. “He’s fully on board with a policy that completely supports the Israelis, so I’m there.”

Other Republicans offered additional caveats to their praise.

Sen. Bill Hagerty (R-TN) told JI, “I was pleased with [him] on the whole. I thought he handled himself well in the [hearing].” Hagerty said he is withholding a final decision on how he will vote until Nides answers his written follow-up questions.

Sen. Todd Young (R-IN), who questioned Nides about the administration’s support for reentering the Iran nuclear deal, said “he handled himself pretty well,” but “there’s no way any ambassadorial nominee could answer that with a straight face, so he just avoided the question, which, in a way, showed a certain level of professional integrity.” Young did not say how he planned to vote.

Even with support from some committee Republicans, Nides may not be confirmed to his post immediately. Multiple Republican senators are preventing quick confirmation of all State Department nominees in protest of Biden administration policies on the Nord Stream 2 Pipeline and Afghanistan withdrawal. While Senate Democratic leadership is teeing up a blitz of confirmation votes for later this week, Nides will not make it through the committee process in time.

During the second part of the Foreign Relations hearing, Sarah Margon, Biden’s nominee for assistant secretary of state for democracy, human rights and labor, faced much harsher grilling from committee Republicans, primarily over past tweets and statements about Israel and Iran. Margon is the U.S. foreign policy director for the Open Society Foundations and was previously the Washington director for Human Rights Watch.

Margon tweeted in 2018, “Thanks AirbnB for showing some good leadership here. Other companies should follow suit,” in response to a news article about the vacation rental platform’s decision to remove listings in West Bank settlements, which it subsequently reversed.

In response to questions from Risch, Margon insisted repeatedly that she “firmly” opposes the Boycott, Divestment and Sanctions movement targeting Israel, and always has — claims Risch said he did not believe.

“That tweet was in response to a Human Rights Watch report… I believe the private sector across the board has an important role to play in not promoting or pursuing discriminatory policies,” Margon said.

Margon also retweeted in July 2020 a New York Times column titled “I No Longer Believe in a Jewish State,” by Jewish Currents editor Peter Beinart, in which Beinart argued against a two-state solution and in favor of a one-state solution.

“Sometimes when we tweet or say things in the heat of the moment we don’t necessarily think of the broader impact of them. When I retweeted that article, what I was really focused on was the importance of ensuring Israelis and Palestinians could have equal protection under the law, access to democratic processes, security and prosperity,” Margon said in Wednesday’s hearing. “That was the thrust of my tweet and what I intended with that. I firmly believe in a two-state solution.”

Margon also said during meetings with Risch’s staff that she believed both the Biden and Trump administrations’ strikes against Iranian proxies and officials in Iraq — including Iranian Gen. Qassem Soleimani — were illegal.

“My staff tells me that your [administration] ‘sherpa’ almost fainted when you said that the strikes by the current administration are illegal. Have they straightened you out on that? Are you willing to go along with the administration’s view?” Risch asked at one point in their exchange.

“Of course I’m willing to go along. President Biden, Secretary [of State Tony] Blinken have nominated me to do a job and I’ll uphold administration policy,” she responded.

Margon also emphasized that she “strongly supports” Israel’s right to defend itself.

She went on to say she would, if confirmed, push back on unfair bias against Israel from the United Nations — particularly the Human Rights Council — as well as international human rights organizations.

“If I am confirmed, one of the things I would like to do if the U.S. rejoins the HRC is work with the international organizations bureau, the ambassador to Geneva and this committee to help reform the Human Rights Council so it is more effective, so it does not have a disproportionate bias against Israel including that agenda item,” Margon said.