Mapping the future for Israelis and Palestinians from a D.C. rooftop

The reception marked the launch of Heart of a Nation, new venture overseen by longtime former AIPAC staffer Jonathan Kessler 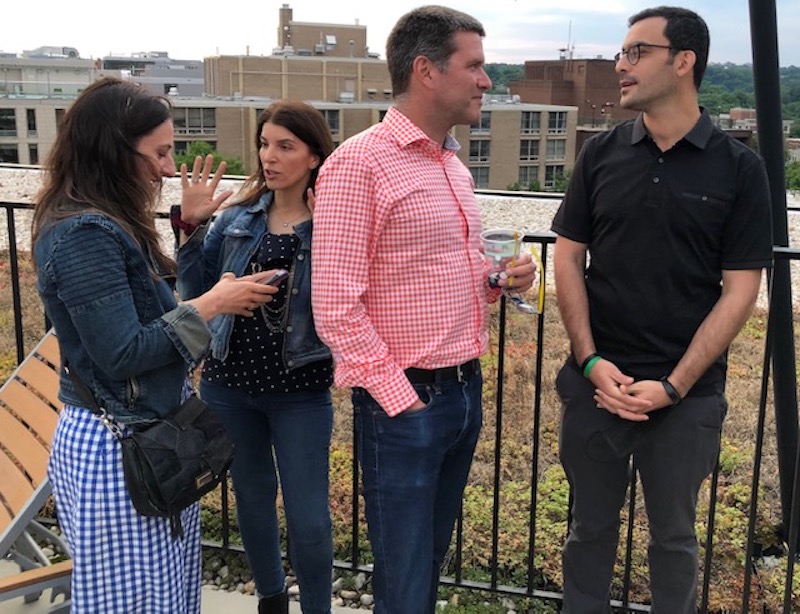 Attendees at the launch of Heart of a Nation

At a rooftop reception near Dupont Circle on Tuesday evening, former longtime AIPAC staffer Jonathan Kessler officially launched his new venture: Heart of a Nation, an organization devoted to bringing together American, Israeli and Palestinian progressives.

Around 15 people gathered on the rooftop of Kessler’s apartment building for wine, cheese and crackers and hummus. For many, it was their first public event since the start of the COVID-19 pandemic. People mingled, speaking of their excitement to return to the office or their yoga studios. Every attendee had come at the personal invitation of Kessler.

Sitting on wicker lawn chairs on an unseasonably pleasant June evening drinking boxed wine was a group that included Kinney Zalesne, a former Hillel International vice president now serving as general manager of corporate strategy at Microsoft; Yousef Bashir, a former PLO staffer from Gaza who is now director of research and operations at the S. Daniel Abraham Center for Middle East Peace; Lauren Strauss, a professor of Jewish studies at American University; Joel Rubin, executive director of American Jewish Congress and former Jewish outreach director for Bernie Sanders’s presidential campaign; a senior Biden administration official; several AIPAC staffers; and a handful of other friends of Kessler’s whose work has to do with Israel or the Middle East.

Heart of a Nation’s message is that the policies that have been pursued in the Middle East for decades are not working — and the first step toward improving the situation is to bring together open-minded Israelis, Palestinians and Americans to form relationships upon which future progress can be built.

Heart of a Nation, which Kessler calls a “community of purpose,” is meant to create a network of progressives who can collaborate, problem solve and discuss issues faced in all three cultures, like racism and the unraveling of democracy. It aims to highlight similarities between all three groups of activists, but it does not take an official stance on any issues, particularly the one that could most divide members: the Israeli-Palestinian conflict.

“It’s about improving the nations we love, and fixing the things that are wrong with the nations we love,” Kessler told Jewish Insider. He did not respond to a question about what Heart of a Nation will do if the nations’ plans for progress come into conflict with each other, such as if American or Palestinian activists call for a boycott of Israel.

Heart of a Nation’s mission is “thought leadership,” said Kessler, and not lobbying or advocacy, as he spent the last several decades doing at AIPAC. Under the auspices of the initiative, Kessler intends to produce a podcast and publish an online journal with articles written by the group’s 36-member advisory board, half of whom live in the U.S. and half of whom are Israeli or Palestinian. When asked, he did not reveal the names of any of the organization’s donors, saying only that the support has come from “Jews, Muslims and Christians.”

The recent fighting between Israel and Hamas has put the burgeoning organization to the test. “Not one person of the 36 original [members] quit Heart of a Nation,” Kessler said. “Every single person called privately to say, ‘You know, I’m skeptical. But I’m not gonna quit this. This is very hard and painful.’”

But the escalation and the tensions in Sheikh Jarrah, a Palestinian neighborhood in East Jerusalem where home demolitions have fueled anger, also seemed to add a sense of urgency to the work.

Sitting in a circle on the rooftop, guests offered toasts extolling the value of dialogue.

“Two weeks ago, people, friends from around the world were calling me asking, ‘How does it feel to be in the most advanced country in the world, vaccinating everybody, and everything is perfect?’ And then a week later, people call me to ask what’s going on in Palestine and the rockets,” said Nir Tsuk, who runs an entrepreneurship program at NYU. “In the Middle East, things change by the minute. But we are all optimists. And we believe in sanity and the power of good people to do good things in a good way.”

Reema Abuhamdieh, a journalist at an Arabic-language broadcaster, had just returned from a reporting trip to Ramallah, Hebron and villages in the West Bank where Palestinian protesters and Israeli soldiers were clashing as rockets were fired just a few miles away between Israel and Gaza. Growing up in Hebron, she saw daily the difference in how Israeli settlers and Palestinians lived. “I kept asking myself one question every time I went through Shuhada Street,” Abuhamdieh said. “What if I was born on the other side? Who would I be? What would I do?” From a young age, she considered the perspective of the Israelis who lived just across the street, even if it felt like a separate world entirely. Kessler had attended an iftar dinner at her home in Washington a few weeks before.

For Kessler, having these conversations involves admitting that there are certain words and phrases he avoided in his previous job — and now coming to terms with why language matters.

On Tuesday, he explained the organization’s plans for the next year: First, Heart of a Nation’s American members will travel to the Middle East this fall to meet Israeli and Palestinian members. Next spring, the group will convene in the American South, to learn about the region’s history and progressive activism.