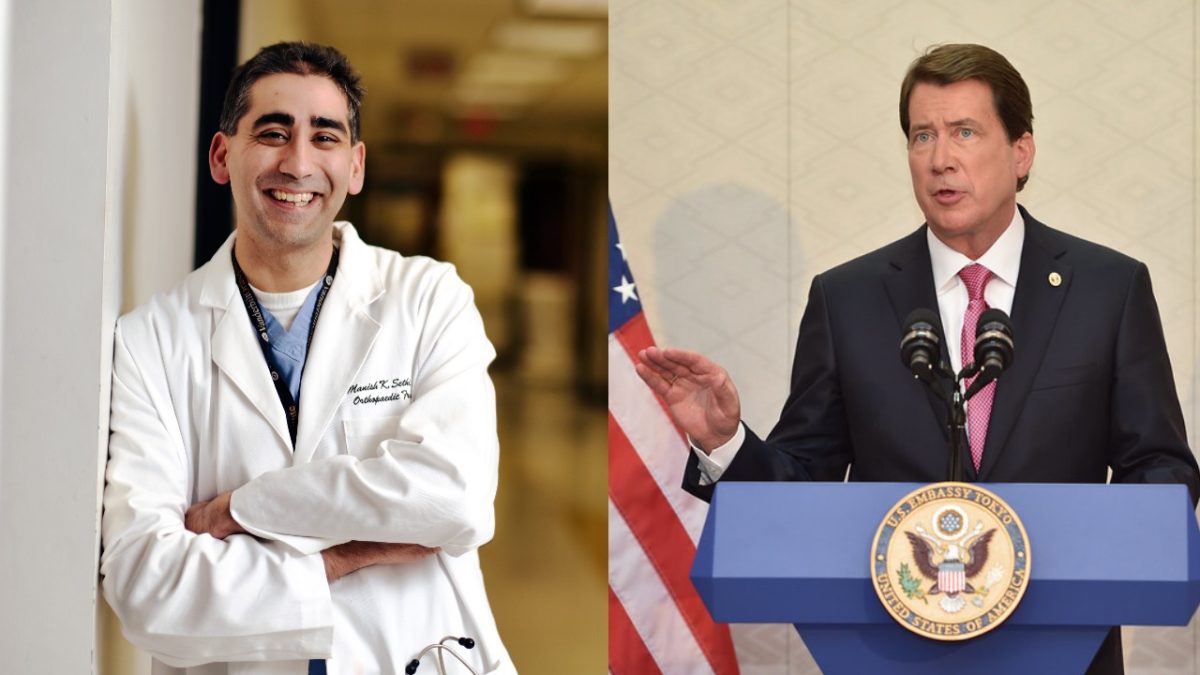 In Tennessee, a proxy battle between Republican party heavyweights is coming to a head as voters head to the polls today.

The state’s Republican Senate primary — an unexpectedly competitive race between a candidate with longtime ties to the GOP establishment and a political neophyte — has devolved into what Politico recently described as “the nastiest Republican primary in the country.”

Bill Hagerty, the former U.S. ambassador to Japan, had expected a glide path to the Senate when he launched his bid in September 2019, and early polling had him in a comfortable lead. But he has encountered unexpected resistance from Dr. Manny Sethi, with recent polls putting them neck-and-neck for the nomination. The candidates are seeking to replace retiring Sen. Lamar Alexander (R-TN), who announced in late 2018 that he would not seek reelection.

“Hagerty had everything going for him a few weeks ago. Sethi really surged,” Tom Ingram, a political consultant and Alexander’s former chief of staff, told Jewish Insider. “My thought is that it has really become a competitive race.”

Trump, however, has been unexpectedly silent in the final days of the race, Vanderbilt University political science professor John Geer told JI, a possible indication that the president’s staff is unsure which candidate will emerge victorious.

Sethi has linked Hagerty to Sen. Mitt Romney (R-UT), a former friend of Hagerty’s who has been at odds with the Trump administration. Hagerty falsely accused Sethi of supporting an organization bankrolling rioters, as well as supporting socialized medicine.

There’s “not much daylight” between Sethi and Hagerty’s positions, Geer said, attributing the personal attacks to a lack of policy disagreements.

“I think it’s a sign that they’re trying to find something that puts distance between them. They’re struggling to find that,” Geer said. Voters will largely be choosing “which personality people find more appealing,” he added.

According to Ingram, the negative campaign rhetoric could end up backfiring on Hagerty.

In the final days of the campaign, “the talk about Hagerty has been that he’s gone too negative,” he said. “The talk about Sethi has been positive.”

Ingram added that he does not believe the campaigns have reflected either candidate’s background or personality.

“Hagerty and Sethi are fundamentally good people and they’ve had distinguished careers, Hagerty in business and government of late and Sethi in medicine,” he said. “I don’t think this campaign particularly for Hagerty is reflecting that. I think his campaign has been run by Washington operatives who pretty much do things by today’s book, which is in this case focused on destroying your opponent rather than presenting your candidate. Frankly I think the campaign is a disservice to Hagerty and his career.”

Ultimately, Ingram said, the race will hinge on the power of Hagerty’s attacks versus Sethi’s likability.

Throughout the race, Hagerty has largely relied on Trump’s endorsement — which he received even before stepping down as ambassador to Japan, according to Geer.

“Hagerty just basically wrapped himself in the Trump endorsement, which people assumed would be enough, but we’ll see if it proves to be the case,” Geer said.

Given the strong establishment support Hagerty had going into the race, a Sethi victory would be a “stunning upset,” Ingram added.

Both candidates argue their backgrounds make them ideally suited to serve in the current circumstances.

Sethi said his career as a trauma surgeon has prepared him to work across the aisle and overcome partisanship. He has also drawn on his medical expertise to criticize the administration’s coronavirus response.

“I think the horizontal containment strategy that the U.S. has employed to address COVID-19 has harmed our country,” he said in an email to JI. “Our country’s leadership needs to take a step back and re-examine the path we are taking to address this virus.”

Hagerty said his experience countering China while serving as the U.S. ambassador to Japan would be critical.

“I’ve looked China right in the eye, militarily, diplomatically and economically,” he said. “And I can tell you, I know how to hit China where it hurts.”

Hagerty added that he engaged with Middle East politics and helped strengthen U.S.-Israel relations by working with Japan to reduce its dependence on Iranian oil.

“Japan has a long-standing relationship with Iran, but I was able to successfully work with them to sever those ties, and… to isolate Iran, who is the greatest sponsor of terror in the world, and certainly the most existential threat to Israel,” he said. “I’m proud to stand beside Israel and work to put Iran… in a position where they’ll never obtain a nuclear weapon.”

Hagerty also said he has communicated with the team that helped draft the Trump administration’s Mideast peace deal, although he said he would need to examine the deal more closely before offering an assessment on it.

In terms of peace talks, Hagerty said the U.S. must remain firm in its support for Israel, including working to achieve Palestinian disarmament, continuing aid to Israel and resisting BDS, including within Congress. Hagerty also supports Israel’s proposed annexation of portions of the West Bank.

“Israel has consistently shown that it is willing to make tough sacrifices to reach lasting peace with Palestine. However, each time Israel openly comes to the negotiating table, the Palestinians have shown stubborn unwillingness to work towards peaceful solutions,” Sethi said. “The only way that lasting peace can be achieved is if the Palestinians agree to negotiate a two-state solution in a mutually agreeable manner.”

“As such, the U.S. should not pressure Israel to engage in peace talks or impose terms on either party. Rather, the U.S. should remain willing and open to serve as an honest intermediary in talks between parties,” he continued.

Sethi said he has some personal insight into the threats Israel faces. As a Fulbright scholar in North Africa shortly before 9/11, Sethi said he had a “front-row seat to the rise of Islamic fundamentalism across the Middle East.”

“My experiences reinforced my belief that without Israel, the forces of radicalism could rage unchecked throughout the region,” Sethi said. “I saw firsthand the power of these radical forces to destroy society.”

Whatever the outcome of the primary, either candidate would be heavily favored to win the seat in November, and the rest of the party would likely quickly line up behind him. In 2014, Alexander beat his Democratic opponent by a 30-point margin. “It’s going to be very hard for the Democrat to win,” Geer said. “Something dramatic would have to happen.”