Facing several primary challengers, the congresswoman says she is the only one with the 'leadership and experience' to effect change in Washington 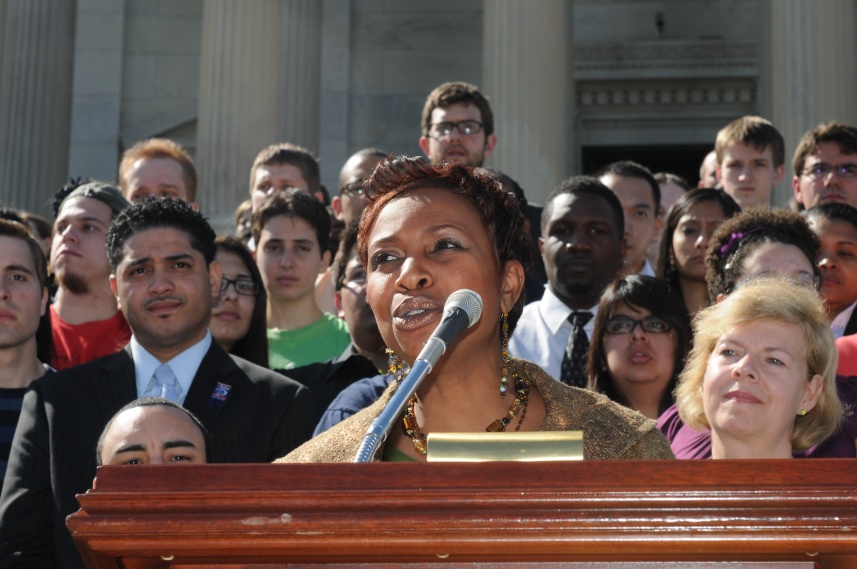 Rep. Yvette Clarke speaks at press conference on the East Front Steps of the Capitol. (Wikipedia)

Rep. Yvette Clarke (D-NY) has represented New York’s 9th congressional district since 2007. Jewish Insider recently spoke with the seven-term Congresswoman about her time in Washington, the upcoming Democratic primary, COVID-19 and the racial inequality protests in wake of the killing of George Floyd, as well as her views on Israel-related policy issues.

JI: What do you see as your key accomplishments in office?

Rep. Yvette Clarke: “My passion for public service, devotion to my constituents, and commitment to equity and justice have defined my tenure as a Congresswoman. Three bills I am proud to have helped pass are the Affordable Care Act, the H.O.M.E. Act that aims to ensure affordable housing is a reality for all New Yorkers, and the HEROES Act which provides necessary monetary support and medical material to our health workers and hospitals, as well as addresses the financial strains felt by millions of Americans as a result of the economic fallout of the pandemic. Between these three pieces of legislation, I have been able to secure real results when it comes to affordable healthcare, fair housing, and economic relief. There is more work to be done on all of those issues, as well as on civil rights, but I believe I have helped lay the groundwork and am motivated to keep fighting after I am reelected.”

JI: How has the COVID-19 pandemic and the killing of George Floyd influenced your thinking and impacted your priorities going back to D.C.?

YC: “The coronavirus has torn through our lives, our communities, our country, and the inept leadership of Trump and his administration have only allowed the disease and harm to spread further. COVID-19 has only exacerbated the already existing disparities and inequalities in our healthcare system. It has made clear the instability of our housing and the economic exploitation of our workers. This pandemic has only made me more laser-focused on the issues I have spent my career advocating for. We have no time to waste and there is no room for a margin of error in the next steps taken by the federal government. It is time to get serious about restructuring our society to be a more equitable and just place.”

“I mourn the loss of George Floyd, of Breonna Taylor, of Admaud Arbery. I still mourn Eric Garner, Michael Brown, Sandra Bland, Tamir Rice, Trayvon Martin and too many others. We need to see police reform and the police officers who murder and use excessive force fired and legally punished. I have been inspired by the young people organizing and protesting. Change has come from their efforts. The murder of George Floyd did not teach me anything I did not already know about racism in America but it did remind me that young people are powerful and we should support their activism and listen to them.”

JI: Do you have confidence that voters in the district will reward you this year for the work you have done so far?

YC: “I believe I have earned the trust and respect of my constituents by providing and fighting for them in Washington. It is undeniable the harsh and disproportionate impact the COVID-19 pandemic and its economic fallout have had on Brooklyn and in our communities. The death toll, nationally, has surpassed 100,000 and the road to recovery and a better future is still long. I have been working tirelessly to get medical aid in our district and economic relief bills passed in Congress. I have been on the ground, helping to deliver food and protesting with my community in the wake of the murder of George Floyd. NY-09 is the only home, community, and family I have ever known and I fight hard to ensure Washington listens to them.”

JI: Can you describe your personal relationship with House Speaker Nancy Pelosi (D-CA)?

YC: “As Vice Chair on the Energy and Commerce Committee, one of the committees with the largest jurisdiction in the House, I and my staff have regular communication with Speaker Pelosi and her office to coordinate efforts to advance the Democratic agenda. With my seniority in the caucus and long-standing relationship with leadership including my good friend Caucus Chair [Rep. Hakeem] Jeffries, I have an opportunity to leverage my experience in Congress to influence the direction and general contours of important pieces of legislation.”

JI: What is your relationship with the Jewish community in Crown Heights?

YC: “I believe I have a strong relationship with the Jewish community in Crown Heights. I take the needs and interests of my constituents very seriously and have met with Jewish community activists. In the wake of antisemitic attacks in Crown Heights, I have stood by my constituents, condemning acts of hate and supporting anti-hate crime legislation in Congress and at the state level.”

JI: Are you satisfied with the city’s response to the rash of antisemitic attacks in your district last December? What more can be done on the state and federal level, and how can you assure members of the Jewish community, who are more visibly Jewish, that they are safe?

YC: “I was a strong supporter of the City Council’s bill that would create ‘The Office of Hate Crime Prevention.’ I worked with council members and local officials to see that this passed. The city needed to take proactive measures to stop hate crimes and make sure everyone, no matter their religion, race, or any identity, feels safe in our city.

“Our current president uses rhetoric that is racist, xenophobic, and antisemitic and backs it up with hateful policies. We need to defeat 45 in November, a victory that would replace him with someone who will unite this country and reassure the Jewish community that they are safe.”

JI: In a NY1 debate, you said you will not be bullied by your male rivals. How do you feel your challengers are unfairly attacking you?

YC: “Our country faces many challenges. We do not have time for leaders who need to catch their bearings upon arrival in Washington, rather we need representatives [who are] ready to get back to work right away and continue fighting for issues such as affordable housing, an equitable healthcare system, and the creation of more economic opportunities. Leadership and experience should not be underestimated, especially in 2020.”

JI: Some Israel-related questions: Do you support a two-state solution, and is that still a viable option?

JI: Would you condition military aid to Israel to press the country on settlements or if it annexes parts of the West Bank?

YC: “I do not think using concrete redlines outside of overt violations of human rights provides the optimal path forward. The goal must remain to find a path to a two-state solution that respects the rights of the Jewish people to live free from fear and respects the basic humanity of the Palestinian people. Finding this solution will obviously be difficult, and as such we must keep the channels of communication to foster continued dialogue and be willing to forge through discomfort to find an amendable conclusion for all.”

JI: Would you sign onto a congressional letter expressing opposition to Israeli annexation?

YC: “The United States must never abandon its special relationship with the State of Israel to guarantee the Jewish people a homeland. However, as a partner in this special relationship the United States must also be comfortable holding Israel to the same higher moral standard that we seek to meet everyday. While I do not generally believe that strict redlines aid the overriding effort towards a two-state solution, I do believe that there are some issues that have become so politically polarized that they risk politicizing the overall U.S.-Israeli relationship to the detriment of both nations. Because of President Trump’s vocal support of annexation, any affirmative actions to that effect will now likely become part of a partisan battle that has little to do with Israel and nearly everything to do with growing tribal attitudes. For that reason, I would sign on to such a letter to protect the long-term health of the United States’ relationship with Israel.”

JI: Do you support federal measures against the BDS movement?

YC: “I strongly oppose the BDS movement. In Congress, I voted for resolutions such as H.Res. 246 which calls for ‘opposing efforts to delegitimize the State of Israel and the Global Boycott, Divestment, and Sanction movement targeting Israel.’”

JI: Is there anything your challenger Adem Bunkeddeko has said about Israel that concerns you?

YC: “While I will allow my opponents’ comments to speak for themselves, I can definitively say that I will continue to offer my voice and the power of my office to support a strong and secure State of Israel.”

JI: Do you support more sanctions on Iran or want to see the U.S. rejoin the 2015 nuclear deal?

YC: “I support the U.S. rejoining the 2015 nuclear deal. I believe the plans laid out in that deal offered the U.S. and our allies the best options for peace and preventing the Iranian regime from obtaining nuclear weapons. The deal was showing positive results up until the Trump administration decided to pull out. I hope under the next Democratic administration we are able to negotiate back what we had in 2015.”