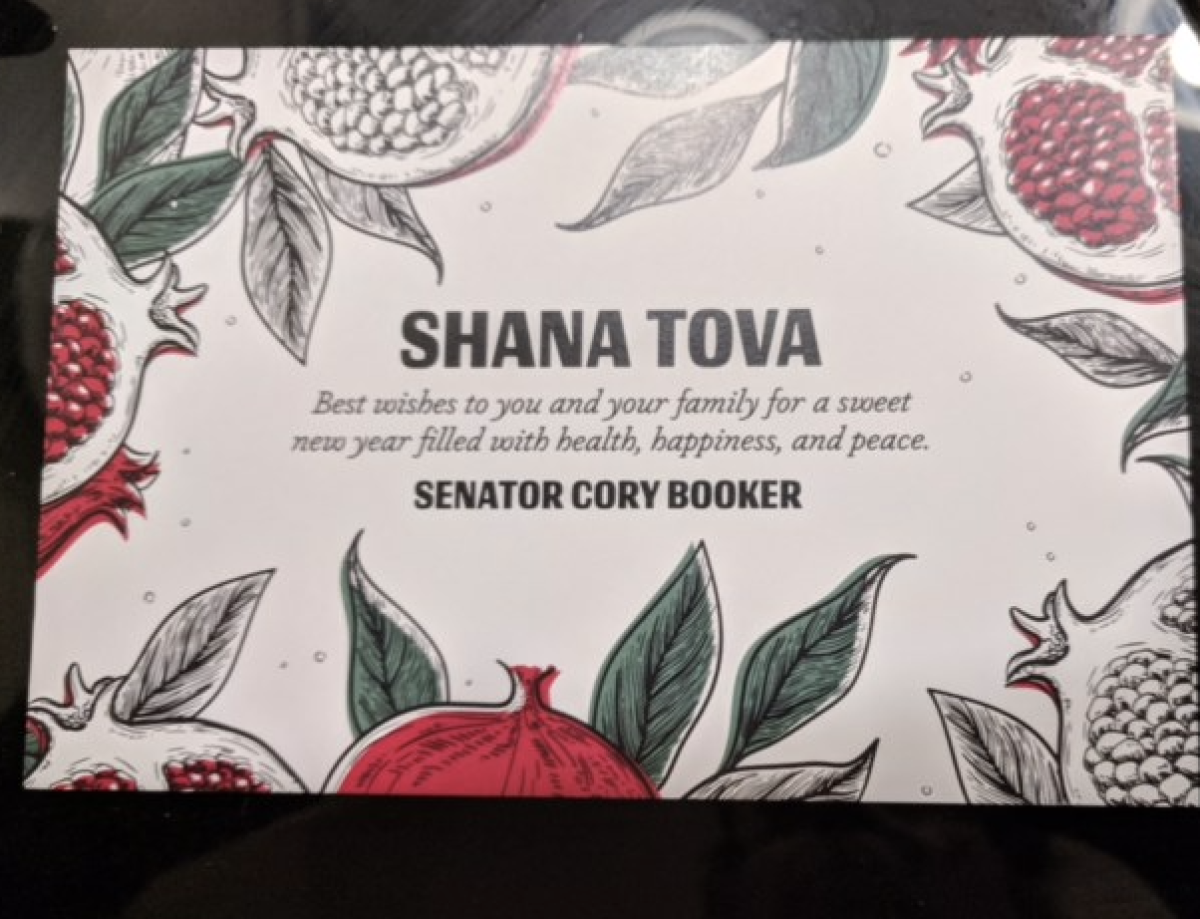 Cory Booker’s presidential campaign is reaching out to Jewish voters in Iowa and other key primary states in an innovative way.

The New Jersey senator sent out Rosh Hashanah cards to over 30 Iowans and a broader group of supporters and friends across the country, wishing them “Shana Tova” in advance of the Jewish New Year. Set against a background of pomegranates, a fruit traditionally linked to Rosh Hashanah, Booker wishes recipients “a sweet new year filled with health, happiness and peace.”

David Adelman, a prominent Iowa lawyer and Democratic activist, received one of the cards himself. Adelman, who has not decided who he’ll be voting for in February, told Jewish Insider that it was “a nice touch and a nice gesture.”

He did not remember gestures like this during past caucuses, but noted that he received a Rosh Hashanah card from Hillary Clinton during the 2016 general election. He also recalled spotting singer Carole King, who was in Des Moines as a surrogate for John Kerry’s presidential campaign, at Rosh Hashanah services in 2004.

Jeff Link, a top Democratic operative in Iowa, noted that there “certainly has been outreach” to the Jewish community in past cycles. He hearkened back to a candidate forum at a Des Moines synagogue in 1988. Although Jews make up just 0.2% of the Hawkeye State’s population, Link said the Jewish community is still an important one for candidates to woo. “You have a lot of opinion leaders, influential Democrats and community leaders in that group, so I think it’s numerically not the biggest interest group in the state, [but] I think it’s important and influential,” said the veteran Democratic operative.

Booker himself has had a long interest in and affinity with Judaism. The New Jersey senator led the L’Chaim Society at Oxford while studying there in the early 1990s. He showed off his knowledge of Hebrew earlier this year during a CNN town hall and has long been a strong supporter of the alliance between the United States and Israel.

The cards come as Booker’s campaign has been struggling in the polls. The New Jersey senator announced on Saturday that if his campaign didn’t raise $1.7 million by the end of September, he would have to consider dropping out of the race.

In a statement, Booker’s Iowa state director Mike Frosolone told JI, “it’s very important to us that every faith and community in Iowa knows that they have an ally in the Cory 2020 campaign. Rosh Hashanah brings an excellent opportunity for us all to celebrate and be thankful for the blessings of the last year, and we wanted our friends in the Jewish community to know we are thankful for them.”